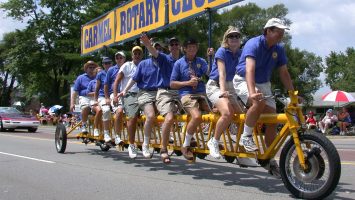 Both democracy and oligocracy derive from the Greek root-based suffix -cracy, which means power or rule.  Democracy begins with a form of demos – or populace.  Oligocracy begins with the prefix of oligo, which means “a few,” “chief,” or “principal.”  In short, rule by the few.  This is contrasted with dictatorships, where the power of rule is concentrated in a single person.

Most organizations are in some stage of what Fredrick LeLoux describes as Reinventing Organizations.  They’re on the path from fear, power, and command-and-control approaches to collaborative approaches to working with one another.  However, the path isn’t as straight as it first appears.  On the one end, you have dictatorship, and on the other end, it appears that you have democracy – but many would appropriately argue that it becomes anarchy.

Organizations exist to coordinate the effort of individuals into a unified force.  That historically happened through the power and force of a single individual and has gradually been diffusing across the organizational leadership into a cord of multiple strands.  In short, our organizations are becoming more oligocratic.  This is particularly true of partnerships where there is no one partner with complete control regardless of the ownership percentages.

Winston Churchill described democracy as the worst form of government – except for the other forms we’d tried.  In theory, democracy is a great idea, but it’s not without its practical limitations.  Getting everyone on the same page can take a long time – a prohibitively long time.  That’s why the Thomas-Kilmann Mode Instrument doesn’t recommend the middle ground of the assertive and cooperative dimensions – compromising.  Building true consensus can take an infinitely long time.

Imagine for a moment that the United States Congress had to reach consensus for everything they did.  Literally nothing would get done – except for recess.  This is the descent into anarchy.  It’s what happens when nothing can get done, because there’s no power for anyone to encourage others to do what they want.  Congress relies on many behind-closed-door agreements, where one member agrees to support another’s initiatives.  It’s the lubrication that makes the limited democracy of Congress work.

It’s Latin for “first among equals.”  It’s the way that partnerships navigate the difficult waters of who gets to make the decisions when everyone wants to lead in different directions.  One person is elected to do a role, and the others agree to subject themselves to the decisions of this role.  They thereby distribute decision-making authority between equals to prevent the deadlock and anarchy that can occur when democracy is allowed to run amok.

Like in partnerships, there’s an implicit understanding that if the person elected to the role doesn’t dispatch the role well, they’ll be replaced.  This pressure ensures that the person with the role considers the needs and desires of others while making their decisions.

The goal in your change should be neither democracy nor oligocracy but primus inter pares.