The Human Side of Change: A Practical Guide to Organization Redesign

You are here: Home1 / Book Reviews2 / The Human Side of Change: A Practical Guide to Organization Redesign

In the late 1990s, there was a growing awareness of the importance of people in the organizational change process. Too many failed mergers and acquisitions had opened a small awareness of the need to consider how people may or may not follow the leadership wishes blindly. That’s where The Human Side of Change: A Practical Guide to Organization Redesign comes in: it’s Timothy Galpin’s effort to create better awareness and tools for managing the people side of the change process.

I stumbled across Galpin’s work through my exploration of change models. His model, which consists of nine wedges, is a process for improving the chances for a change project to be successful. It looks like this: 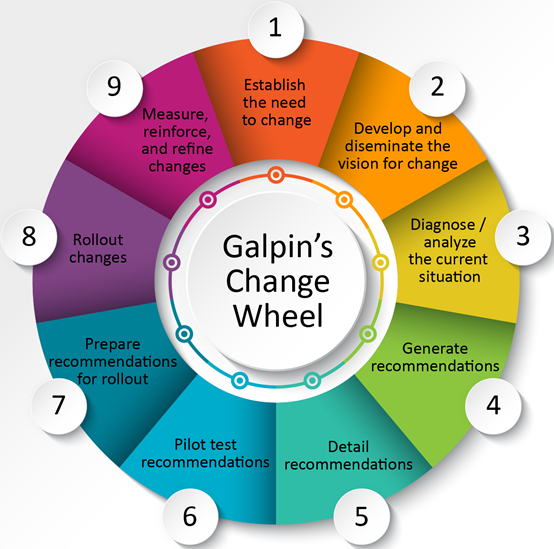 The steps he includes are familiar:

These steps parallel most of the other models for change, including the need to create a sense of urgency (Kotter), to unfreeze (Lewin) and others. It’s familiar, because its circular or cyclical nature implies that the process is iterative or continuous – like Deming’s PDCA/PDSA.

The Reality of People

The key insights that Galpin offers are around how people really behave as compared to how we want them to behave. For instance, knowing that experts are often boxed in by their hidden assumptions about the way things work, so what they see is not what might be. Similarly, Galpin is clear that often the grapevine – the informal communications network – quickly takes control from the formal communications as for what is happening in the organization.

He’s also clear that people are not always transparent. There are things that they hide from others for reasons of fear, the desire to maintain power over others, or sheer apathy at sharing the information. The way that this plays out in an organization is a Johari Window.

I’ve spoken about the idea of the Johari Window in both The Black Swan and The Secret Lives of Adults. The short version is that it’s a two-by-two grid separated along the axis of us and others, with each having an unknown and a known option. The original work goes back to Joseph Luft and was used in the context of individuals and their self-awareness. Galpin extends this to the organization and helps us to see how organizations suffer from the same blind spots and facades that individuals do.

In short, organizations must be careful to learn as much as possible about themselves to minimize blind spots. With the exception of the brand image, care must be taken to not create too large of a facade that must be maintained. Communications – internally and externally – should be realistic and honest.

Galpin supports many of the kinds of communications recommendations that you’d expect, including the need to be more open than one might want to be at first, messages should be linked strategically, and they should be proactive rather than reactive. More interesting is the comment that communications should be realistic and honest.

Brené Brown speaks about how people minimize the grit that was necessary for them to reach where they are. She calls it “gold plating grit” in Rising Strong. It’s the tendency to minimize or deflect the challenges. Galpin’s call to be honest forces us as communicators to acknowledge the challenges – and ideally help the organization know how we’re going to conquer them. It’s too easy for us to deceive ourselves into believing our change project will be easy.

Galpin speaks about the resistance as: not knowing, not able, and not willing. These roughly equate to the phases of ADKAR to increase awareness, desire, knowledge, and ability. I resist Galpin’s framing of this because of the awareness of Bridges’ work on managing transitions, which focuses the awareness on resistance of loss instead of resistance of the change.

The top level of Galpin’s model – not willing – is rare and may represent folks who are in the precontemplation phase in the Stages of Change model. That being said, the resistance is still focused on loss – of the current status quo – towards something new.

Galpin is an advocate of coaching, carefully explaining that coaching is positive, and criticism focuses mostly on the negative. He’s also a fan of being clear up front that everyone will be receiving coaching. In An Everyone Culture, Robert Kegan et al. share the strategies from three organizations and how powerful it can be to build a culture of accountability that believes everyone should be coached from every direction.

Maybe it’s time to get a bit of coaching towards The Human Side of Change.