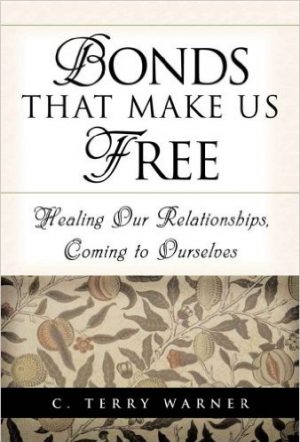 I recently had an experience where someone stereotyped me as someone that had a problem sharing my feelings due to the fact that I work with computers. It was an interesting experience because I don’t think that way. I wasn’t offended; it was just one of those moments where I realized how other folks can see me based on the labels that are attached to me. One of the other stereo types of folks who work in technology is that we’re all about the gadgets – and OK I have to admit I have a bit of shiny object syndrome, however, much of my work over the last few years has also been trying to figure out how to help people help themselves. All that being said, I thought I’d take a break from some of the more industrious reading about adoption, engagement, diffusion of innovation (expect a book review soon), psychology, etc. to read about feelings and one-on-one human interaction.

I sometimes say that it’s every parent’s God given right to screw up their own children. This is a seemingly harsh thing to say but it’s true. We all inherited issues from our parents. They taught us – mostly unintentionally –some really bad habits when it comes to relating to other human beings. Whether you picked up rage (check), avoidance (check), passive-aggressive (check), or something else, you got wounds from your family of origin (your nuclear childhood family). In some sense we’re spending our lives trying to heal those wounds through other people, hobbies, alcohol, drugs, and risk taking. (I know I’m really upbeat in this post thus far, hang in there with me.)

The book Bonds That Make Us Free discusses how those wounds that are inflicted on us are ours to heal. We won’t get anywhere by believing that it’s someone else’s responsibility to heal us. We’ve got to heal ourselves. We’ve got to be responsible for our own “recovery.” No one else will – or even can – do it for us. That being said, you can’t heal until the issue that caused the hurt has been addressed. In the analogy of a disease the bacteria or virus must be eradicated. In the language of an injury, the thing causing that injury must be addressed. This may be easier said than done – or it may be done already. If you’ve moved out of your parent’s home – as I expect most of us have, their ability to impact you is much more limited than it was before. This is an of itself is a key point – you must remain somewhat vulnerable. Without some level of vulnerability you’ll never really connect and experience love with another human being. The good news is that you can take appropriate measures to remove yourself from a situation, create boundaries, or avoid the problem areas.

Let me unpack the preceding a bit since it’s a bit dense. On the one hand we’re not responsible for our hurts. We’re not responsible for the things others have inflicted upon us – we are, however, responsible for our recovery – for what our reaction is and for how we respond. This perspective limits the times that we can feel like we’re a victim – and that’s a good thing. Somewhere most of us learned that being a victim is a good thing. You don’t have to take responsibility to be a victim. It’s someone else’s fault. You can’t be blamed. However, victims feel helpless and therefore aren’t able to extract themselves from their condition and that is an unsafe attitude. I reviewed Mindset-The New Psychology of Success but I didn’t mention one of the studies that involved helplessness and how we can become conditioned to not try to change our conditions even if it would be good for us to try to do so.

I’m reminded of the circus elephant who’s tied to a small wooden stake with a rather thin rope. A child asks its mother, “Mommy, how can the big elephant be held back by such a small rope?” The answer is profound and confusing to the child. “It’s not the rope holding back the elephant, it’s his expectation.” You see when the elephant was smaller he was tied with a heavy chain to an equally heavy anchor. The elephant learned through repeated attempts that when there was something tugging on his leg that he wouldn’t be able to overcome it. With my apologies to PETA the story is a colorful way to realize the immense power of an expectation. If you expect that you’re the victim, then a victim you’ll remain.

One of the things that I stumbled up against while reading the book was a simple question that I’ve been asked – and I’ve asked others over the years. “Is this the person you want to be?” The typical way that this has been asked in the past by others is “What do you want folks to say about you at your funeral?” My problem with this is that it frames it in the distant (impossibly distant) future so there’s no need to change today. For me the more urgent question is “Is this the person you want to be?” because it frames the decision of what to do next based on the person that they want to become. In a sense we’re asking a person (perhaps ourselves) to ascribe meaning to our actions.

Strangely enough, we’re pretty good at ascribing meaning to actions – even when those actions are truly meaningless. We’re often ascribing meaning to the actions or inactions of others. When a friend doesn’t call us back we ask if they’re offended with us. When a car cuts in front of us we believe the person is being rude (rather than just not knowing the area and suddenly realizing they need to turn.) However, as much as we ascribe meaning to what others do, we rarely question how our actions drive us to being more like the person we want to be – or less like the person we want to be. One of the keys in Bonds That Make Us Free is how we react is the problem. Our thoughts, judgments, and hurt feelings are the problem.

There’s a beautiful dance that’s played out in the book between love – connections and the eastern philosophy of detachment. It’s a dance because detachment is often heard as “I don’t care” as expressed by an angry person. However, it’s the anger that indicates that the words are not true. If the person didn’t care they would answer calmly. If they weren’t attached to the outcome they couldn’t be disappointed. (Anger is disappointment directed according to eastern philosophies.) So the dance between being open to another person to expressing your willingness to love them and at the same time accepting that they may not “love you back” is a delicate walk.

These are my thoughts – but the concepts here are expressed – more eloquently – in the book.