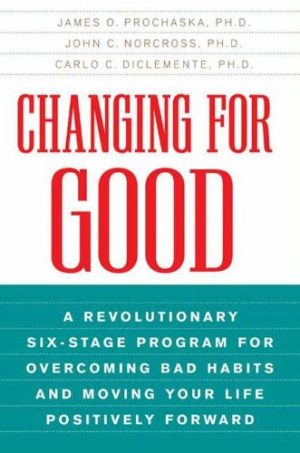 Change books generally fall into two broad categories. The first category of books is targeted at the super-large organization and describes structures for change that involve hundreds or thousands of people. The second category of change books are focused on how to accomplish the individual changes necessary. The first category generally acknowledges that all change is individual change. That any organization doesn’t change unless its people change. That source of awareness seems to come back to Changing for Good: A Revolutionary Six-Stage Program for Overcoming Bad Habits and Moving Your Life Positively Forward. Based on the work of James Prochaska, John Norcross, and Carlo DiClemente, the book shares how the most stubborn addictions can be broken by an awareness of where people are along a continuum of progress, from being completely resistant to change to the termination of bad behaviors.

Transtheoretical Model and Stages of Change

It was 1972 when Lester Luborsky first published his findings that all legitimate psychological therapies produce favorable and nearly equivalent outcomes. His work has been replicated repeatedly, as The Heart and Soul of Change elaborates on. However, at the same time, the rates of recovery for those who are addicted is abysmally low. As a result, Prochaska and his colleagues (graduate students and then collaborators) looked for explanations of the problems associated with both self-changers and those seeking therapy to identify what was successful and what was not.

Ultimately, their approach was a transtheoretical model – that is, it spanned multiple theories. It focused on six stages of change – and therefore is often simply called “stages of change.” The stages are:

What they found is that, at different stages, different approaches were more appropriate than others. They surmised that the “up to 93% drop-out rate” for therapy programs was due to a mismatch of the approaches being used and the stage that the patient was in.

All Change is Self-Change

It reminds me of an old joke. “How many psychologists does it take to change a lightbulb?” The answer? “One, but the lightbulb really has to want to change.”

The fundamental awareness that any change including those surrounding addictions come from personal commitment drives the awareness that organizational changes are the results of individual changes.

Very few people understand addiction. It’s a different kind of thinking and lack of control that can seem foreign even to those who are in its grips. If you’re trying to understand how addiction functions, I’d recommend The Globalization of Addiction and Chasing the Scream as solid references. You may also find Dreamland helpful for enhancing your understanding of the unique dynamics that power addiction and why addicts can be so difficult to change.

When you have trouble getting through to someone whom you’d like to change, you may find yourself on the outside of their mental shields. Detecting an attack, their ego seeks to protect itself. Approaches like those relayed in Motivational Interviewing may help you break through; but, ultimately, if someone’s mental shields are up, they may be unable to accept input about their behaviors.

In addictive behaviors, there are generally consequences that can be pointed to that make it clear that there’s a problem – except the defenses our ego can muster are impressive. (See Change or Die for more.) After all, our reality is a thing that our brains construct, and it’s possible to construct our reality in a way that denies objective fact. (See Incognito for more.)

All behaviors – good and bad – have antecedents (A), behaviors (B), and consequences (C). When you pay attention to the process, you can find the antecedents (triggers) and learn to limit them through environmental control (or shaping) or learn to respond to the triggers with different responses. (See Triggers for more about the potential antecedents and what to do about them.)

Despite the limitations of Charles Duhigg’s research and approaches, his The Power of Habit encourages you to shift things until the old habits are extinguished and the new habits start to take hold. Much of this is about changing the reaction to the trigger by creating better awareness.

If Only They Would Change

People stuck in the precontemplation stage aren’t interested in changing themselves. They’re interested in those around them changing. They want less conversation about their issue. They want less nagging. They want others to compensate for them. These approaches are the kindling for a fire of codependency. (For more on codependency, see Compelled to Control.) Because people who are in precontemplation can’t take responsibility for themselves, they ask others to take responsibility for them.

One of the things that holds people back in their change is the feeling that they’re powerless to overcome their addiction. They have tried in the past, and because they weren’t successful, they assume they’ll never be successful and therefore they don’t even want to consider it. It’s an amazing level of defensiveness for the fragile ego that anyone who has tried to convince someone with an addiction to change is familiar with.

It’s difficult to move people who believe they have little or no self-efficacy that they do. It’s difficult to help others shift from the belief that their circumstances are permanent and personal to temporary and global. This is hopelessness at its core, and it holds people prisoner. (See The Hope Circuit for more on the power of hopelessness.)

Much of this hopelessness hangs on the idea that if someone had enough willpower, they’d somehow be able to successfully conquer the forces that keep them trapped in their current behaviors. The problem is this is a faulty understanding of willpower. Willpower is a renewable but exhaustible resource. As Willpower explains, we have to manage and conserve our use of our willpower so that we’re able to have enough reserves when we really need it. Too often, we treat willpower like it’s something that you have or don’t have instead of as a resource that’s constantly changing.

Influence and Nudge both cover the impact of small changes and how they affect behavior as well as how small changes that reduce the need for willpower can have huge results. Sometimes, eliminating the small temptations frees your resources up for larger problems.

One of the strange things that researchers noticed was that undesirable behaviors tended to travel in packs. If you think of a bar, you instantly think alcohol. However, until a few years ago, you would have also associated a bar with thick, smoke-filled air. Nicotine and alcohol travel together, but they’re just the beginning. Have you noticed that most bar food is not good for you? It’s fried, fatty, and loaded with salt and calories.

The bad news is that the gang tries to stay together. Light your first cigarette, and you may want a drink. The good news is that, when you sequentially eliminate bad habits, the later habits are much easier to get rid of – not just because of practice but because the other habits aren’t there to pull you in.

In addition to the subtle cues, it’s important to get caring feedback about your health. However, in some families, any attempt to share your perspective with another family member isn’t seen as an intervention for their wellbeing or caring – it’s seen as interfering.

When you’re interfering, you’re treading into their personal space – a space that you should never enter. Somehow, if they want to kill themselves, it should be okay. While they might support intervening if your family member is holding a gun to their own head, they don’t support you saying something when they’re holding a cigarette up to their head.

The lesson is finding a healthy understanding of what it means to caringly share your concerns about a family members health without accepting the interfering label. Often this also needs a great deal of capacity for detachment. (See Resilient for more on detachment.)

Contemplation: Not Ready to Make the Leap

During the contemplation stage, it’s natural to want to push for action. It’s natural to desire action, because we equate action with progress. However, sometimes the people who are in the contemplation phase have decided they need to make the change, but they just don’t know when. They’re not able to plan for how to make the change because they’ve decided rationally on the change, but they’ve not emotionally accepted the losses that will come as a natural consequence of the changes.

If you’ve accepted the emotional consequences of learning how to change better, maybe it’s time to read Changing for Good.