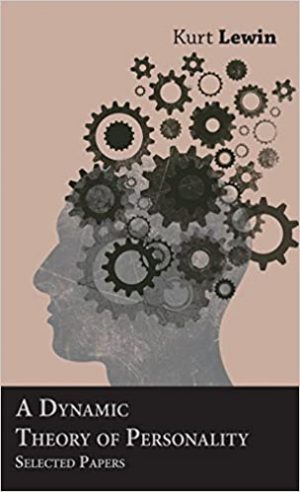 It’s hard to work in learning and motivation, or even remotely care about how people work, without stumbling into Kurt Lewin’s work. Most of the time, people quote the high level and don’t go back to read his writing directly. They think about force fields and behavior functions and stop there. However, I was recently intrigued by a subtle difference between the way some authors referred to his behavior equation and decided the only way to get to the bottom of the mystery was to read his work directly. That’s what led me to A Dynamic Theory of Personality and therein some of Lewin’s writings.

Behavior is a Function of Person and Environment

It’s a simple formula – B = f(P,E). However, it is profound. It says that both person and environment influence behavior but that their interactions are opaque. We don’t know precisely how they interact – and the implication is that we may not be able to know. The mystery that started the journey was that some people wrote the function with the word “situation” instead of “environment.” Indeed, most of the places surrounding the actual equation use situation instead of environment. However, what is most likely happening is an artifact of the translation process, since the original work was written in German.

Whether the text was using the word situation or environment, the intent was the same. The things around us, from cultural norms to the kind of lighting and how warm or cold it is, influence our behaviors in subtle – and sometimes not subtle – ways. The situation we find ourselves in influences our behavior. If we’re in a stressful situation (or environment), we’ll behave differently.

What started out as a question about whether the original intent was situation or environment led to another fascinating observation about Lewin’s research.

What I realized that much of Lewin’s work was with mentally retarded children – his words are “feeble-minded” and “moron.” (Perhaps I’m showing my own bias by not using the NIH preferred terms, but I prefer to think of these children as held back or limited instead of disabled.) His studies included comparing the behavior patterns of these children to those who were more normal and investigating the differences in their behavior patterns, particularly their persistence. This reminded me of The Marshmallow Test and Grit – how persistence and patience pay off. However, the data was interesting because it showed that mentally retarded children seemed to have a greater degree of persistence – and a lower distractibility. This is also interesting from the perspective that the task put in front of the mentally retarded children might have put them in the challenge-skills ratio to support them entering flow. (See The Rise of Superman, Flow, and Finding Flow for more on the psychological state of flow.)

It also reminded me of Einstein and his self-admission that he wasn’t the brightest student – but that he was more persistent. (See Raise Your Line for one mention of this.) It’s also been claimed that Thomas Edison was removed from school and educated by his mother, because he wasn’t a good student. Whether this is true or is simply a myth, it’s interesting to me that Lewin’s research showed a tendency for mentally retarded people to work on something for longer. We know from Carol Dweck’s work on Mindset and Anders Ericcson’s work on Peak that people can radically change their capacity if they’re willing to work on it.

Science fiction has become enamored with force fields. It’s a chosen device for protecting the good guys from the bad guys – and vice versa. In their science fiction form, they’re impenetrable fields that can protect against projectiles, lasers, and anything else the opponent might come up with. Lewin’s force fields are more akin to physical science than science fiction. The force lines that magnets generate and the vector equations of physics are more like the force fields that Lewin used to understand and describe the behavior he was seeing.

It’s not like it’s impossible to push through Lewin’s force fields. It just takes some effort. There are a set of normal forces that hold things in their relative state. Even if the state is oscillating, there is some relative balance that things fall into. The planets orbit the Sun and the Moon orbits the Earth in a relative stable environment, where the forces of gravity are balanced with the centrifugal force exerted as the heavenly bodies try to continue along their straight paths. However, a force can be exerted that will knock things completely out of balance – and can snap one or more of the force fields being applied to something.

That’s why when we teach change managers about implementing change, we recommend that they look for opportunities to change the forces that are present rather than directly exerting force against them. If you ever find yourself trapped near a black hole, accelerating your orbit around the black hole will be much more effective than trying to directly pull against it. (See how we teach change management in our Confident Change Management course.)

There’s another way that we teach to shut down the forces that are holding you back. It’s quenching. Forces are exerted only when the need or drive is active. When you satiate the need, you quench it. The key, then, becomes what does satiating mean, and how do you satiate to the point where the force being generated is quenched?

It may be easiest to think in terms of hunger. A very hungry person will do almost anything to get food. The forces that propel them are very powerful. However, after a big meal, there is almost no force to get food – there might even be a small push against food if their belly is already stuffed, like after a feast.

If someone has a drive for position, it can be that their drive is quenched – at least temporarily if not permanently – by a promotion to the next level. Sometimes, this means giving in on smaller and less important issues to neutralize the disproportionally high forces they exert on people. In my experience, many people are happy to do the same or more work with a simple change of title – even if it doesn’t change their responsibilities or authority.

The Choice of Punishment

Perhaps the most interesting observation was the observation that sometimes-threatened punishments are considered as choices rather than being considered as unacceptable alternatives. When presented as “You do X, or I’ll punish you with Y,” some children decide that Y is better than X, so they specifically state that they’d like that alternative.

The problem is we rarely enumerate all the consequences of failing to do the desired behavior. Thus, the equation that is being evaluated is incomplete. The expectation is still that the child completes the requested activity – even with the punishment.

Observations like these make it important to dig into Kurt Lewin’s work, and one good place to start is A Dynamic Theory of Personality.