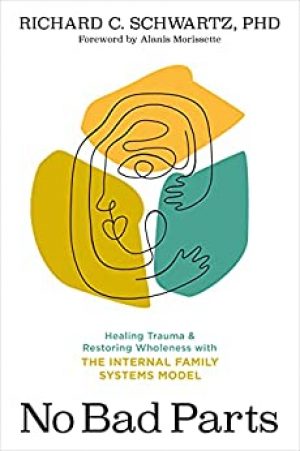 It’s not that Richard Schwartz believes you have a multiple personality disorder.  In No Bad Parts, he explains the fundamentals of Internal Family Systems (IFS) and his belief that we all have various parts of ourselves rather than a single consciousness.  The collection of pieces, including protectors, exiles, and our true selves, are all jumbled up as a part of our experiences – and the hope is that they can be harmonized and allowed to recognize the safety that most of us enjoy today.

Before we can become introduced to our parts and have “conversations” with them, we’ve got to identify the stance that we must take for every part of us to feel as safe as possible.  That starts with detachment, often explained as observing from a distance.  (See The HeartMath Solution for more on detachment.)

Dan Richo’s How to Be an Adult in Relationships encourages us to focus on five As of healthy adult relationships, one of which is acceptance.  It’s avoiding judgement and simply accepting that what we’re experiencing is truth – it may not be our truth, but it is truth.  (See Theory U for more about suspending judgement.)

Parts of ourselves that are locked into protection mode often want to express themselves differently – and can only do so once freed.  Ultimately, protectors are disarmed when they can trust that we’re safe.  In a sense, they’re a part of us with PTSD.  (See Transformed by Trauma for more on PTSD.)  Too often, the protectors are still protecting a small child incapable of defending themselves even though we may be “all grown up now.”

There are other parts of us that we try to deny.  While they may not rise to the level of clinical addiction, there are often parts of us that drink too much, eat too much, or just binge watch television that we wish we could get rid of.  The typical strategy of pushing them back is trying to get past them via sheer force of will rather than trying to accept them – and thereby remove their power.  Shame is a powerful driver that reinforces the power that these exiles have – and thereby makes them harder to get rid of.  (See I Thought It Was Just Me (But It Isn’t) for more on shame.)

Other parts of us may be the hypercritical or the distractor, which lead us away from knowledge of our intrinsic value or the value that we’re sharing with the world.  (See Stealing Fire for more about our inner critic.)  These parts of ourselves, too, need to find their proper home.  We need the critic to keep us and our ego from getting completely out of control – but we can’t succumb to its overwhelming noise.  How We Know What Isn’t So explains how our egos are necessarily a bit out of whack, and Katherine Norris explains in Acedia & Me what can happen when it goes the other way.

One of the key challenges with the parts of ourselves – and the reason that we’ve not found our way to an integrated image yet – is the sick cycle that allows the parts of ourselves to feed back on themselves.  We binge eat and feel shame, which gives more power to the part of us that wants to binge – and the cycle starts again.  We lash out in protection, and then feel vulnerable for the mistake, so we lash out again even harder.

The most important part to disrupting a sick cycle is to learn when it starts.  If you can see the cycle happening, they’re often easy enough to disrupt.

Ultimately, the IFS model proposed by Schwartz isn’t materially different than what Virginia Satir proposed (see The Satir Model for more).  The key difference is the explicit instructions to identify and discuss each part as an individual part of the self until such time that it can be integrated into the rest of the self.  Just like Schwartz, Satir seemed to believe there are No Bad Parts.