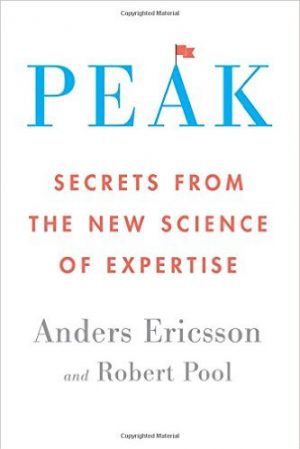 How is it that some people just seem to get better and better at what they do? Whether it’s a ballerina, a musician, or a doctor, they just seem to get better with every day of practice. At the same time, how is it possible that most ballerinas, musicians, and doctors don’t improve with practice? They just practice? The answer may be in the idea of “intentional practice” as Peak: Secrets from the New Science of Expertise reveals.

Ericsson’s work wasn’t first publicized in his book. It first hit the market as a part of Malcolm Gladwell’s book Outliers. In this book, he sensationalizes the need for 10,000 hours of practice in order to gain mastery of something. It was effective at galvanizing ideas around the “10,000 hours” number. It was successful enough that it was satirized in a Dilbert cartoon, where Dogbert said, “I would think a willingness to practice the same thing for ten thousand hours is a mental disorder.” I suppose if the practice were all dreary repetition that would be true – it could be characterized as a mental disorder.

The problem is that Gladwell didn’t get the answer precisely right. It’s not 10,000 hours as a specific number that matters. It’s not a magic number where at 9,999 hours you’re awful, and at the 10,000th hour you’re miraculously transformed into the next king of rock and roll. Instead, it’s the momentum built by 10,000 hours (or substantially less) of purposeful practice. Each hour of work trying to get better adds a new skill, technique or understanding. This gets momentum building until, eventually, a person’s velocity appears to be magical.

Purposeful practice is the kind of practice where you’re a bit outside of your comfort zone, and you’re trying to learn one thing – sometimes one very small thing – with the practice that you’re performing. It means staying engaged and really trying towards a specific goal.

Many years ago I purchased a Dr. Who pinball game. A few years ago I had it converted over to all LED lighting and completely refurbished from the ground up. The game has an upper loop common in pinball games. They’re hard to hit but they generally give very large rewards. Hitting the loop in this game is a playfield multiplier. If you do it as a part of a larger sequence, it will give you an extra ball.

I had played for hours before I made a specific decision. I wanted to improve my technique for getting into – and staying in the upper loop. I did this by ignoring everything else on the board for hours. I’d play just to get to the upper loop and stay there. My one game record is 28 loops. When I finished this skill I worked on another skill. While I never completed all of the skills that I would need to be really good at the game, I could tell that my game improved when I specifically targeted a specific skill.

More interestingly, purposeful practice needs to occur over a long period of time. Practice is – for most folks – not the most fun thing in the world. There has to be a motivation for practice to be continued. Ericsson notes that Bloom (yes, the same Benjamin Bloom responsible for Bloom’s Taxonomy) noticed that, after a few years of practice, the students began to identify themselves with the skill they were learning rather than other things. Identification with the skill is a motivator; however, it’s the same intrinsic motivation that drives flow. We get into flow because getting into flow (and the resulting skill development) is fundamentally something that is rewarding to us.

So what is it about top performers that’s different? It turns out, it’s how they see the world. Top gymnasts have a better model of gymnastics than those who aren’t at the top of their field. Chess masters have a better mental representation of the game than the novice. As Josh Waitzkin explained in The Art of Learning, at some level it’s no longer about the memorized openings. At some point, chess – like life – is understanding how the game is played – better than anyone else.

Gary Klein applied mental models to the fire commanders who he studied and wrote about in Sources of Power. They were simulating the fires and attempting to find a set of variables that could explain all of their observations. Efficiency in Learning uses schemas to describe the critical mental models that students must build in order to learn.

By focusing on a small part of the activity, it’s possible to swap out a less effective mental model of an aspect of the overall goal, much like you would swap out components in a desktop computer. You don’t have to replace the whole thing to upgrade a part of the experience.

The top performers in any given area are focused on swapping out the little component models which aren’t working as well as they would like with newer, more effective models.

Peak performers are always looking for a better option – and therefore they’re more likely to generate innovations. Peak performers aren’t satisfied with the status quo. They’re not OK with just good enough. Gary Klein speaks of what insights are in his book Seeing What Others Don’t. Insights are a different way of seeing the world. Insights are upgraded models of viewing the world. These updated insights lead to different views of the problem, and therefore the ability to solve the problem in ways that others can’t even imagine.

What’s even better than deliberate or purposeful practice? Informed practice. Informed practice is when you have a teacher, a guide who can help you to learn through practice how to improve your skills quickly, using the standardized teaching techniques that the field has developed over time.

Informed practice is an accelerated kind of purposeful practice.

Differentiating Between Performance and Practice

So if I’ve got 10,000 or 100,000 hours of work in a field, does that necessarily mean that my mental representation of my field is better than or at an expert level? In a word, No. If I’ve been constantly performing trying to optimize my results with each engagement, then I’m necessarily not allowing for failure, or focusing on how to improve one aspect of my work. As a result, I may – or may not – perform better than when I started.

I remember one time when I was very young we had a large snow. We decided to build a snow fort in the front yard. If you’ve never had to build up a snow fort, then you won’t know that the first step is to pile all of the snow that you have into the place where you’re going to create the fort. I started with a snow shovel and I’d carry the shovel back and forth. I then tried a variety of techniques to improve the efficiency of the operation until I settled on using a trash can. I could slide it across the lawn, scooping the snow, then take it over to the snow fort and dump it on. I remember this because by the time I had fully refined my process, I had consumed all the snow in the rather tiny yard. I spent all my time trying to optimize the process – so much, that I failed to realize when the actual task was done.

I mention this story because for me I entered into a state where I wanted to try to make things better (in this case, more efficient) and I was willing to make significant investments in trying different strategies. I was, in effect, practicing to find the best way to move snow. Today it seems silly to think about a child of about 8 years of age doing process optimization work, but that’s what I was doing. (I still don’t know if my mother was more impressed or concerned about these activities.)

Inherent in the notion of practice, like the notion of play (See Play for more), is the idea that it’s relatively safe. That means even if I mess up, even if I make a mistake or don’t perform as well as I normally do, that it will be OK. There are no looming consequences which are going to threaten my survival.

I mentioned in Trust => Vulnerability => Intimacy that safety is an important part of growth. As strange as it sounds, even the extreme athletes discussed in The Rise of Superman believe that what they’re doing is safe. That may be because their brain has shut down their inner critic or they’ve rationalized the safety issues away, but they feel relatively safe. It is this relative feeling of safety that enables normal learning.

If you’ve worked at anything for a length of time you’re undoubtedly going to encounter some discouragement, some setbacks, frustration, and you’ll want to quit. The difference between peak performers and the rest of us is, when this time came, they kept with it. They kept practicing and trying to get better. They found a way to work past the discouragement.

In The Psychology of Hope, we learned about the components of hope, including willpower and way power, and how they together help us to move through discouraging situations. By developing these skills – these mental processes – we can cope with more discouragement and regain our belief that we can be the best in the world someday.

Paul Tough in How Children Succeed calls this persistence or grit. It’s this grit that can carry you through the trough of despair as you believe you’re not making progress – or not making enough progress.

Peak performers have faced many of these false beliefs about their limits and have overcome them. Whether you’re running a mile or you’re trying to be the best swimmer in the world, you’ll have to get rid of your fears and your belief systems that raise artificial barriers. It’s only by confronting these barriers that you can become the Peak of your field.