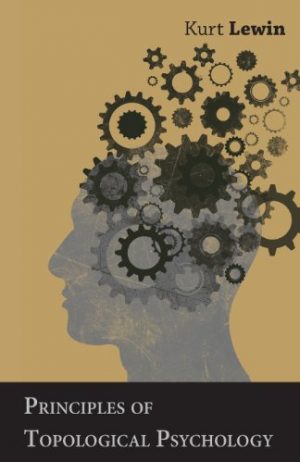 On the surface, it would seem like math would have very little to do with psychology. However, when looking at Kurt Lewin’s work in Principles of Topological Psychology, it’s clear to see how mathematical models influenced his thinking on psychology and how to motivate people.

Most folks know Kurt Lewin’s work because of his famous equation that behavior is a function of both person and environment. Some are aware that he proposed a model for change that involves unfreezing behavior, changing behavior, and freezing it again. Those aware of his concepts regarding force fields and their application in accomplishing change will recognize how Lewin was influenced by science and electromagnetism. (See A Dynamic Theory of Personality for more.)

Here, Lewin’s thoughts about psychology and motivation use set-based language from advanced math. He speaks about the things that are inclusive to a state, the boundary conditions, and other concepts that are borrowed directly from advanced mathematics.

I was surprised about the relationship, even though I had read John Gottman’s work in The Science of Trust. Gottman’s particular interest in game theory comes from advanced mathematics and mathematical simulation as well. If you want to know more about game theory and its application, see The Evolution of Cooperation.

While force field analysis was concerned with the motivators for moving someone in one direction or another, topological psychology is concerned with your current state and the places that are accessible from that state. It’s about creating a map from where someone is at any given moment to their desired state. The transition from today to the future can be a single step across a single border or it can be a multi-step process with various borders.

The motive force is provided by force fields pushing or pulling on the psyche of the individual, but the application of that force is most interesting in topological psychology. What path will be chosen to move towards the goal – and why?

First, regions can be subdivided. Just because the region contains a set of mental states that are similar doesn’t meant that, when evaluated from another dimension, the region might not split into two regions. Mathematically, a closed set should allow for infinite subdivision. While this is unlikely the case with mental states, it’s possible to provide a great deal of division, thereby separating thoughts and perspectives based on numerous criteria.

Second, boundaries are really regions as well. While it’s easy to conceptualize a boundary as a crisp line, such a crisp distinction doesn’t always exist. Consider the regions for the colors red, blue, and green. In which group does the color blue-green belong? This classic information architecture problem leads to an awareness that even boundaries can be expanded to more detail when appropriate.

Person and Environment are not Independent Variables

If you’re wondering how people move from one perspective to another – and how that impacts behavior – maybe it’s time to look at the Principles of Topological Psychology.