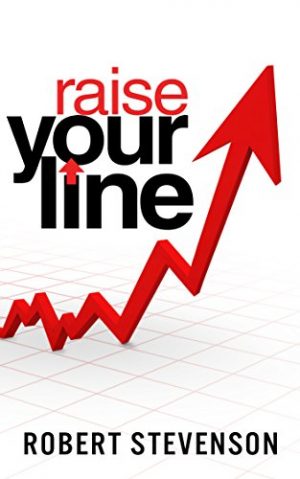 Most books about success have some obvious plot lines. Work hard. Do the right things — even when it’s hard. They share their unique perspective on the world and then provide the recipe for getting success by following their steps. Raise Your Line: Success Is a Higher Line Mentality certainly fits into this category. It’s a collection of ideas that Robert Stevenson believes will help you elevate your life. Certainly, this can happen, but the story is a bit more complicated than that.

One of the challenges with popular leadership, management, and self-help books is that they promise success. If you simply follow this formula you will succeed. As was discussed in the Heretic’s Guide to Management, this isn’t likely. It’s more likely that the author will find a set of behaviors that work for them to improve their life. These behaviors may be generally applicable to everyone – or unique to their situation. For instance, if I shared that you should read a book a week and blog about it, you might think I’m crazy. However, it works for me. There’s no telling whether it will work for you or not.

The old saying that, “what works for the goose works for the gander” may not be the case – depending upon what the author is sharing. For instance, I mentioned that The ONE Thing recommends focus when that may or may not be the right answer. As Bold pointed out, different leaders have different approaches to how to manage (or ignore) risk. It takes different strokes for different folks.

Reading Between the Lines

What about how you implement the suggestions they offer? I’ve mentioned my appreciation for and my struggle with the Stockdale paradox from Good to Great in my reviews of On Dialogue, Willpower, The Psychology of Hope, and Rising Strong. How do you know when to persist with an idea and when to adapt to what the market is telling you? I get plenty of feedback on the projects that I’m working on. Some of that feedback may be well-intended, but can send me in the wrong direction. (I get lots of that.) How do you know when to follow the voices you’re hearing, and when to stand firm on the idea that you started with? There are no answers here.

They say that the devil is in the details – and that’s certainly true. All the cliché advice in the world won’t help you be successful if you don’t understand how to make it a part of the way that you live. It’s the making it a part of your life that is the hard part. Thus while there’s some good advice in Raise Your Line, I wonder how much people will be able to integrate it into their daily lives.

Glassier described in Choice Theory that we make choices, and those choices determine our outcomes. He speaks of choices – even choosing to be depressed. (Which I think isn’t wholly a choice but has psychological components.) The good (and bad) news about these choices is that they lead us towards other outcomes. (For why I say lead us toward, see The Halo Effect for more on probabilistic thinking.) All-in-all, if we’re willing to work hard and make hard choices, we’ll generally end up better off in the end.

There’s the old cliché “work smarter, not harder”; but like all clichés, it’s important to realize that it may not be possible to understand how to implement this. The reality is that the saying is intended to keep people thinking about how to optimize their efforts, but has been applied to folks who are working hard and don’t seem to be making any progress. Said differently, it’s a way to guilt people into thinking that they’re not doing enough. (See Daring Greatly for more on guilt – and shame.)

Over the years, I’ve observed that lucky people are the ones that make the big splashes in the news and who are at the top of the wealthiest men on the planet. However, looking deeper, I’ve discovered that many of these men worked very hard for what they got. Albert Einstein admitted that he wasn’t the best student. However, he explained that he was much more persistent than his other colleagues.

One of the recurring themes is the fear of failure. I’ve spoken about it in my reviews of Creative Confidence, and Helping Children Succeed. It’s the belief that failing at something makes you a failure – or more precisely, it somehow makes you unlovable, and no one wants to be unlovable. Being a vulnerable human, there wouldn’t be someone to rescue us when we get overwhelmed.

The fear of failure prevents us from success – or raising our line – by keeping us stuck. We become paralyzed – or diverted – by the fear of failure, and are never able to walk the path we’re supposed to walk.

It was years ago now. I was in a training session. The point of the trainer’s exercise was that putting a puzzle together is easy once you know the solution, but that puzzles are hard until you know the solution. I didn’t know that at the time. At the time, he simply asked the class if anyone wanted to solve a puzzle. Generally, I score well on 3D spatial manipulation. The puzzle was a simple pyramid created of several pieces. I set about solving it and got relatively close when the trainer – realizing that his beautiful exercise was about to be spoiled — decided to provide me a bit of misdirection. I don’t know if I would have solved the puzzle if he hadn’t misdirected me. That’s not the point. The point is that it’s easy to get misdirected. It’s easy to get afraid of trying something and turn into another direction. The trainer later admitted that he believed I would solve the puzzle and thought the misdirection would keep his exercise from being ruined. I was surprised by my failure – but it didn’t stop me from trying again.

When it comes to excellence, there’s a lot of frustration. In fact, it’s frustration with the status quo that drives people towards excellence. What we’re doing today isn’t enough. The Fred Factor exposed how you can be excellent in anything that you do, even if what you do is as mundane as being a mail carrier. You don’t have to be in some powerfully influential role. You don’t have to be a captain of industry to pursue and find excellence.

I think that the greatest barrier for most folks to get to excellence is that they don’t believe that it’s achievable to them. What I’ve learned along the way is that the cost of excellence is low. All it takes is an inability to accept the status quo. The powerful way that it makes you feel is worth the effort.

Folks ask if it’s exhausting to try to push forward in every direction to the maximum extent possible. The answer is “yes, at times.” It’s not that excellence doesn’t take effort – mostly it takes thought – but it’s that if even only a few of the things that you do with excellence are recognized, it’s worth it.

If you want to get somewhere you must keep going. You must find a way to get yourself motivated to start, and the persistence to keep going when the going gets tough – and it’s going to get tough. I’ve been in business (this time around) for more than 11 years now. There have absolutely been times when I’ve wondered if the stress and challenges are worth it. There have been times when my friends have had to remind me that you must keep getting up to the plate and you must keep swinging – because the alternative isn’t much fun.

It’s always darkest before the dawn. It’s an interesting cliché. It’s interesting because it’s correct only if you’re willing to define “dawn” as the time when it starts to get more light. That is, dawn may be at 3 in the morning when only the first hints of light start filtering over the horizon, through the atmosphere, and towards our eyes. Sometimes when you’re trying to keep yourself motivated you have to seek out the dimmest hints of light and remember that they mean you’re headed in the right direction.

The book Switch speaks of the need to follow the bright spots. That is, whatever is working, do more of it. However, this can be looked at from the opposite position. That is, whatever seems to be working – and motivating you to continue – do more of it. Instead of doing more of the action because it’s working, consider doing more of it because it’s motivating you. Even if you know that ultimately whatever it is won’t scale or get you to where you want to go, keep doing it because the motivation may be more important than the end goal. (See Traction for more about models that won’t get you where you want to go – but you may want to do anyway.)

For me, long-term success, something lasting, comes when you can withstand the challenges of day-to-day life and business. The way that you withstand the challenges is to keep motivated. For me I know that we can do amazing things. We can save pain and save lives, figuratively and literally. I don’t know how long it’s going to take to get there, but it is the way that I motivate myself to keep going.

It’s easy to be exceptional. It’s easy to be different and special. One way to do that is to read a book. Stevenson quotes that 80% of Americans didn’t buy or read a book in the past year, and 70% haven’t bought a book in five years. Maybe it’s time to put yourself in the minority and Raise Your Line.