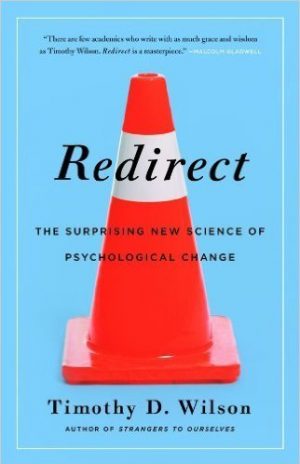 One of the sad things about having read a few books at this point is that I can’t always recall what put me on to the book in the first place. While I can’t remember where I picked up on Redirect, it’s a book that took a winding path that challenged what I “knew” about psychology. I’ve seen this model before where the conventional wisdom is wrong. (See Efficiency in Learning) It’s great to find a research-based book that speaks about some of the common problems that humans face.

The central thesis of the book is that an approach that Timothy Wilson calls “Story Editing” is a powerful way to drive self-sustaining change. The idea of story editing is that we all have our own inner monologue going on at every moment. It’s this inner monologue that we try to bring our life in harmony with. If the inner monologue is positive and powerful – so shall we be. However, this story is often subtly influenced – and influenced in a negative way. Story editing is changing that core story (and the smaller stories that surround it) so that it is more positive.

To accept this you need to start with a belief that we can all change – that we’re not a fixed quantity but an infinitely expandable capacity for learning and growing. This was the central core of Carol Dweck’s book Mindset. Once you’ve accepted that you can change it’s a hop, skip, and a jump to realize that you can influence the direction in which you grow.

Redirect speaks of Cognitive-behavioral therapy (CBT) and its use in counseling to improve the outcomes by working directly on the way that people interpret the world around them. It’s all about that internal monologue and changing the bad patterns (e.g. “I’m not good enough”, “Bad things happen to me”, “I can’t do that”) into positive patterns (e.g. “I’ll get good enough with practice”, “Bad things happen to me but they help me become better”, “I can’t do that – now”). To some extent we all have these internal monologues – these tapes – playing in our head. CBT is generally regarded as an effective psychological treatment.

Of Chickens and Eggs

Which came first, the chicken or the egg? When we confronted by correlated data – such as chickens and eggs – we often consider which of them is causal. That is which one causes the other one. We know that chickens come from eggs – but if eggs come from chickens where did the first egg (or chicken) come from. (For more about correlation and causation see Thinking, Fast and Slow.) Sometimes we get the answers wrong – or backwards. So with that preface, does behavior lead or does thinking lead when we’re trying to change behavior?

The answer, it turns out, to whether thinking or behavior leads is “sometimes.” (I realize this is a non-nonsensical answer.) In some cases changing the behavior will cause the thinking to change. In some cases you can’t change the behavior with the same thinking. Most of us would, however, say that thinking should precede behavior. In fact, that’s the standing assumption in the Diffusion of Innovations and the Knowledge-Attitude-Practice model. However, in some cases doing the behavior is the key to success.

By the way, eggs came first, they just weren’t chicken eggs. They were reptile eggs.

It seems that every book has to take a crack at what happiness, and Redirect is no exception. In a bizarre sense of irony the book says “I have a wise friend who points out that whenever there are multiple solutions to one problem we can be pretty sure that none of them works.” While there’s some alignment about how to be happy, there are certainly a great number of different flavors. I’ve already reviewed The Happiness Hypothesis and Stumbling on Happiness – as just two books that speak about happiness. If you want to lose a day go to the self-help section in the bookstore and search for happiness.

One of the common threads to happiness is relationships. That is the more time that we spend in, with, and for our relationships the happier we are. Certainly this fits with our friends and our families – however, it is also can fit with the people we form relationships with while we’re volunteering and doing service to others (which as it turns out is a key in improving outcomes with teenagers.)

Another thread among the books is what Daniel Gilbert called the psychological immune system, which we were talking about rewiring above with CBT. Basically it’s the way that the internal monologue happens in your head. In Redirect, it’s framed in the context of how optimists see their world. It’s not that they don’t see reality; it’s that they believe that they can overcome the roadblocks in their path. They believe that they are not overwhelmed or crushed.

There are a few clues to being happier in the absence of making a new set of friends – which is recommended. One of the clues comes from the therapy of writing. The book opened with a discussion of how many police departments used a policy called Critical Incident Stress Debriefing (CISD) where people who have gone through traumatic incidents are asked to relive it. The problem is that this sort of forced approach can do more damage than good. What works better? Getting folks to write about their experiences a few weeks after the event –there is no expert guidance and no formal program. Just sit and write down feelings about the event.

It turns out that writing is therapy. That’s not just a saying. It’s not some vague concept. Writing about your thoughts is really therapeutic. The theory is that it allows you to integrate the world into the single worldview that you desire – but no matter how it works, it does work.

Before I go too much further, there’s another critical point to be made. That is that some folks have encouraged the use of gratitude journals where you write a list of things that you’re grateful for. For some reason these gratitude journals can backfire and can actually decrease a person’s happiness. One theory is that this process robs the positive moment of its mystery and that mystery is part of the fun. So writing is therapy – but not when you’re writing about how great things are.

The Inside Out and Upside Down

One of the crazy things about our brain – which I relearned from Redirect – is that in order to not think of something we must first think about it. If I tell you not to think about a white bear, you must first picture a white bear to exclude it from your mind. This means that it’s generally a bad idea to use the word not in a sentence because the inversion may be missed. The very thing that you are trying to drive folks away from may be what you drive them to.

Equally crazy is that a moderate warning is much more powerful than a strong one. In the presence of a strong motivator (to not do a bad thing) you’ll associate your behavior to the strong motivator. However, in the presence of a more moderate motivator, you’ll rewrite your internal monologue to indicate that you’re a fundamentally good person and you’ll do the right thing even when motivators are all gone. We aren’t trying to teach our children to behave when we’re present – we want them to behave all the time.

While finishing with motivators for behavior, social norms are incredibly powerful. If we believe that we’re using more energy than our neighbors we’ll start to conserve but if we perceive that we’re using less energy than our neighbors we may adjust our energy usage upwards to meet the perceived norm. This is powerful when you’re trying to create a better outcome for a small number of outliers doing more of a bad behavior than you want – and a caution to applying a norm to those who are doing less of the behavior.

It’s useful in that social norms are based on perception. If we believe that our friends are consuming more energy we’ll adjust our energy usage upwards – whether this is reality or not.