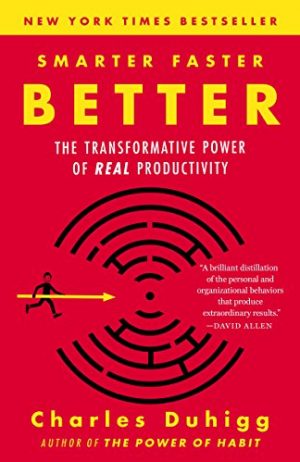 Why is it that some people seem to reach their goals and do great things while others languish in obscurity, not sure what to focus their time on or whether they should watch TV or go to a movie? We all want success – though we may define it differently – and the path to success is, we believe, productivity. In Smarter Faster Better: The Transformative Power of Real Productivity, Charles Duhigg seeks to illuminate the path.

Productivity starts with believing a lie. It starts by believing that we’re in control of our destiny. If we look deeply into anyone’s success, we will find that luck and circumstances played a huge role in their success. Yet for ourselves we must believe that our self-agency, our ability to control our destiny, is limitless.

Carol Dweck’s research proves that people do better in life if they believe in a growth mindset. (See Mindset for more.) The heart of the growth mindset is a belief in self-agency, or what is sometimes called an “internal locus of control.” To encourage a growth mindset, we praise the work and not the results. We help people understand that their effort drives their results, not their inherent skill.

Change or Die explains that if we were to truly look at our weaknesses, we’d never be able to function. A life-threatening asteroid may strike the planet tomorrow – but the odds are against it. Taleb might argue that The Black Swan event is always around the corner, but if we’re hypervigilant in this way on everything, we’ll get nothing done.

The Halo Effect reminds us that, though we love the world of certainty, we live in a probabilistic world. We need to accept that there is a certain amount of chance in our daily doings. While we have some important impact on our lives, our level of influence isn’t limitless. In Extreme Productivity, Robert Pozen spends most of the book explaining his techniques for productivity before admitting in the end that his life has not followed the path of a straight arrow. He’s followed the twists and turns of fate – or luck.

Success, it seems, isn’t dependent completely on luck or work. As Pasteur said, “Chance favors the prepared.” It’s possible that your number will come up on the roulette wheel when you have a small bet or a large bet. The payoffs are much larger when the bet is larger. Working hard – on the right things – allows you to make those larger bets.

An old proverb says that a journey of a thousand miles begins with a single step. Developing productivity is like this. The Rise of Superman talks about how extraordinary things are accomplished by mere mortals and how those feats are typically the results of a very small improvement followed by another and another. Like the compounding of interest, our capabilities grow slowly as we invest in them. If we continue to make small incremental improvements over time, we can do amazing things.

Sometimes people are discouraged when they realize the large gap between where they are today and where they want to go. They don’t know how to break large goals into smaller goals. One man who figured out how to get big things done through small steps was Walt Disney. As I mentioned in my review of Primal Leadership, despite his setbacks, Disney learned to try things in small scale before trying larger projects. He made short movies before feature-length movies. He built a path to Snow White and the Seven Dwarfs though shorts and other tests to ensure that he could produce a full-length animated movie.

The real magic of Disney may not be in the parks but in his ability to connect long-term objectives to the step-by-step progression of smaller tasks. One of the challenges is that many people become overwhelmed when faced with large goals. They feel lost because they don’t know how to get to the end goal. The trick isn’t to know how to reach the goal. The trick is in knowing how to get closer. As The Psychology of Hope points out, what we think of as willpower – the ability to keep moving forward – contains two components: what we’ve traditionally called “willpower” and a second component called “way power.” Way power is an awareness of how to move forward.

This is one of the great learnings of agile methodologies. You just move things forward a little and then reassess to see if you can figure out what the next small step should be. You don’t have to reach the end in one giant leap. You move forward, learn, adapt, and then move forward again. Eventually you learn how things work – for real – and you’re able to make larger and larger leaps.

Gary Klein recognizes that fire commanders had built models in their head about how fires were supposed to behave. (See Sources of Power.) They learned and fine-tuned these models in their experience. They had stumbled across the capacity to think in systems. (See Thinking in Systems for more.) It became possible for them to see everything as connected, and when this happened, they could simulate in their heads what was going to happen. When it happened, they knew they were on the right track; and when it didn’t, they knew they had to adjust their thinking and their response.

One of the funny things is that these fire commanders weren’t always the person with the most experience. They were sometimes just the people who could build the models faster and better than the others. It’s the ability to think in systems that made them good at what they did. Highly productive people, it turns out, generate lots and lots of theories and start to use their systems thinking to model them – and eventually to know which things to test.

Thinking in systems doesn’t come with a cursory interest. It takes commitment.

It’s All About Commitment

In Freemont, California, they’ve witnessed a change. A plant that made cars so poorly that GM had to close it down became a shining star in a partnership with Toyota. The plant is the stuff of legend. Many books have been written about it and reference it. It’s heralded as the quintessential reason why Japanese cars are so much better than American cars – even when the cars are made by largely the same workers.

In the GM command and control model, you didn’t dare stop the production line, because you had been told repeatedly how much that costs the company. In the Toyota model, if you needed to stop the line to do something right, you did. It’s simple, but the transfer of accountability and responsibility is enough to do something magical: create commitment.

When you’re committed to your goal, job, career, or company, you’ll volunteer to work harder. You want to do more than the minimum, because the minimum isn’t great. When you want to take a leap forward, sometimes it means slowing things down to get it right and learn more.

The most innovative people you meet aren’t the people in the science lab learning to stop all vibration of an atom. The most innovative people are the people who take discoveries like that one and combine it with other ideas to create something great. The truly innovative research that has been done, the greatest ideas that have been created, are a result of merging diverse fields. Whether it’s The Medici Effect that set off the Renaissance period by bringing together different artists and inventors or it’s Edison’s lab that brought metallurgy and gas lighting experts together to create the incandescent light, breakthrough innovations are more about combining the thoughts of others than doing your own detailed, tiny, but ground-breaking research.

For me, these random connections are Discovered Truths. Like the periodic table of elements, when you can see the order in the chaos, you can tame it and ride it to the end – rather than trying to grind it out. In the end, Smarter Faster Better is the way we all want to be.