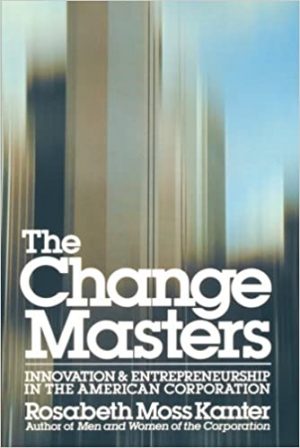 Published in 1983, there is already a concern about the ability for organizations to be innovative. We may have managed to conquer the assembly line and mass production, but it seems that most people have lost their ability to innovate, to try something new. This is the heart of the change that The Change Masters is focused on – how do you help people be more willing to look at things in a new way?

Efficiency is doing things right. Effectiveness is doing the right things. It is a subtle but profound distinction. We had gotten so good at optimizing processes that we had forgotten to ask whether we were optimizing the right things. We were asking whether we were using the right tool to chop down the tree without realizing we were in the wrong forest. In an age of mergers and acquisitions, we had become slave to the quarterly earnings report and had lost our way to long term performance.

It’s certainly true that we need goals to pull us forward, and small, incremental goals can be useful. The problem is that this must come in conjunction with, not instead of, a long-term strategic perspective. With CEOs and management teams trading positions like kids playing musical chairs, there’s no reason to be concerned about the long-term performance of the organization. What matters is the next quarterly earnings report and the bonus that’s attached to the right outcomes – whether they created them or not.

Being innovative is hard. It requires a diversity of skills, a willingness to see a new future, and a heaping of trust. If you’re expecting that your next mistake will cause you to be the first one to laid off, you’re not going to be willing to make mistakes – and being willing to make mistakes is what makes innovation possible. I’ve done a lot of research on innovation (see Innovation by Design, The Art of Innovation, Unleashing Innovation, and The Innovator’s DNA for a start). I’ve come to realize that there are interrelated factors of safety, courage, trust, and diversity of thought that are woven into the fabric of organizations that are innovative.

The Edge of Us

An interesting topic explored by Trust: Human Nature and the Reconstitution of Social Order is what happens when the locus of trust is placed in different places – in the individual, in the family, or in the country. The Evolution of Cooperation touches on this as it explores mathematical models and computer simulations for the best strategies of organisms. The funny thing is that the larger we define the boundaries of “us” – and the fewer people we’re willing to put into the category of “them” – the greater our chances of success – and even survival. Jonathan Haidt in The Righteous Mind makes the point that we didn’t become the dominant biomass on the planet because of our fur protecting us from the elements, our keen eyesight, or even our talons and claws. We became the dominant biomass on the planet because of our ability to work together. The trick is how large do we draw the circle of us and how many people fit in it? Robin Dunbar pegs the number at around 150 people, with some people having more and some having less. (See High Orbit for more.) The larger we draw the edge of us, the greater the opportunity for diversity (see The Difference for more on why we need diversity) and the greater our opportunities for creativity. (See Creative Confidence for more.)

If we want to reach forward into innovation, we need to learn how to draw the boundaries of us beyond our department, our division, and maybe even beyond our own organization.

Change and the Loss of Control

Hidden somewhere deep underneath the obvious reasons why we avoid change, there lies another more honest reason. Of course, when there are changes, there are fears that the change may mean something worse than our current situation; but there’s a deeper fear that we may not be in control as much as we think we are. Someone externally changing things on us is a painful reminder that we’re not in control as much as we might like to believe we are. In Compelled to Control, J. Keith Miller points out that everyone wants to control – but no one wants to be controlled.

The change masters, those who are the best at helping organizations and individuals change, can convince someone that the change was their idea, like Tom Sawyer convincing the other boys to whitewash the fence for him. Mark Twain, and Tom Sawyer by extension, was ahead of his time. It would take decades for people to explore intrinsic motivation and how to get others to do things for you. (See Influence, Pre-Suasion, The Hidden Persuaders, and Influencer.)

15 Minutes Ahead and To the Victor Go the Spoils

Woody Allen was worried about an advanced civilization that was 15 minutes ahead of us. They’d always be first in line at the movies. They’d get the best parking spots, and they’d never be late for a meeting. He was concerned that it didn’t take a big lead to make a big difference. Even a small lead would do.

This is particularly true if the world operates under the model of “To the victor goes the spoils.” That is, the person who wins the first round gets more of the benefits than the loser. The winner therefore has an even bigger advantage the next time. Over time a small advantage can become a big advantage. It’s how Steven Kotler explains the extraordinary feats that some people are capable of in The Rise of Superman.

Nothing immobilizes a manager – or anyone in mankind for that matter – faster than uncertainty and insecurity. When trust is vacant, and the outcomes are uncertain, people – not just managers – hunker down and brace themselves for whatever is coming – whether it make sense to do so or not. When faced with uncertainty, the most likely response is nothing. The response is that we should “hold tight,” “stand pat,” or “seek wise council.” In short, do anything that looks like something but is a statement about intentionally doing nothing.

With the Flick of the Tongue

Within a few years of starting in business, I was working for the CEO of a manufacturing company doing special projects. He had pulled me away from my IT position and asked me to “just do stuff.” It was a variety of things, from pairing me up with a sales guy to relieve some excess inventory to helping change the efficiency of the direct import operations.

One of the things he said was that he had to be very careful about how quickly he changed direction. He described himself as the big gear at the center of a very large machine. If he turned too quickly, it would send all the little gears spinning. He was very wise and knew that a simple comment he might make, a simple flick of the tongue, could send people scrambling. Sometimes that could be in the right direction, but at the wrong speed and more critically, it might send people off in the wrong direction.

The real change masters know that people don’t like surprises – other than a few people who like surprise birthday parties. That’s why effective project and change managers are good at making sure that people arrive at a meeting, and there are no surprises. If they’re in the hot seat over something they did or didn’t do, they know it’s going to happen before they get there.

It helps people feel safe knowing that they won’t be ambushed in a meeting, and that safety plays out in a greater willingness to take risks.

One of the characteristics of great leaders – in change or any other discipline – is their ability to reach clarity. They’re able to cut through the fog of the conversation and find the root of the problem, the key missing ingredient, and identify the key next action. Change masters are therefore good at making the specific request that they need, not some vaguely-worded plea for help.

Though this can be perceived as some as overly direct, pushy, or even rude, clarity in the request creates action. General pleas for help are generally ignored. Specific requests may be denied, but they’re more frequently accepted.

Tolerance for Uncertainty, Not Just Any Old Risk

Success in change isn’t the same as a high tolerance for risk. Adventurous people may be willing to take risks, both personally and professionally, that no one else will take. However, that doesn’t necessarily mean they’ll be in the right position to help enable change. Bridges in Managing Transitions explains that change means navigating a neutral zone of uncertainty – and that isn’t easy.

Many organizations believe that involving employees in every decision or every important decision is a way to help them feel more connected and more loyal to the organization. However, this can just as easily motivate them to leave. Most employees see the kinds of wicked problems that leadership faces as “above my paygrade.” What they are, however, interested in are two things. First, their perspective on the big issues should be heard. Second, in the kinds of day-to-day annoyances that they face, they want to be able to share their input, expertise, and solutions.

Strangely, we’re less concerned about the big picture issues than we are the tiny annoyances. We’re more concerned with the daily mosquito bites than the potential bear in the woods. If you want folks to rally around their cause, sometimes it’s necessary to make the cause tiny and impactful to them personally.

Carl Rogers used to say that people are experts in themselves. (See Motivational Interviewing and A Way of Being.) If we want to be effective, one way of doing that is to tap into that expertise and allow individuals to share their expertise on their life and their world through the development of small-scale experiments that appear to work for them.

While not every experiment will work, that is not the point. The point is that the people with the most expertise in the situation are trying to make it better.

Eisenhower said that no plan survives engagement with the enemy. If that’s the case, then why plan at all? The answer is that the planning process has value – even if the plan doesn’t. In organizations, the plans send a strong signal to the organization about what’s important, the way the organization is approaching the challenges, and what they expect or hope to do.

While the plan itself may be useless, the planning process has inherent value.

Relayed in The Change Masters is a story of how a young boy set fire to a house in which a pig is trapped. After the fire is extinguished, the villagers discover the now roasted pig and eat it. They love the delicacy. They then proceed to trap a pig in a house and set it on fire every time they want to eat roast pig.

In many organizations, we do this. Because we don’t know what about our actions created the result we want, we keep doing all of the actions with sometimes outrageous costs. The lack of understanding of what things caused the result means that we can’t get to the root of what we need to do. Therefore, we sometimes burn down houses for the sake of roast pig – instead of putting the pig on a fire.

While no one book can convert you from a change neophyte to a change master, The Change Masters isn’t a bad start.