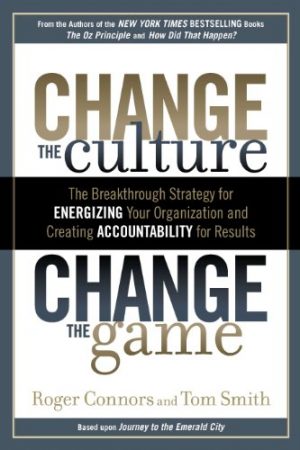 Most books on change conveniently dodge the challenge of culture. After all, changing an organizational culture is difficult. It’s easier to deliver a tactical project than it is to change the way that people think. However, Roger Connors and Tom Smith rightfully think that until you change the beliefs embedded into the culture, you’ll never achieve the breakthrough results you really want. In Change the Culture, Change the Game: The Breakthrough Strategy for Energizing Your Organization and Creating Accountability for Results, they lay out a process for getting different results based on the foundation of accountability and beliefs.

In the end, everyone is pursuing a change, because they want a different set of results than what they’re getting today – or they predict they’ll get in the future. The point of the exercise is the tip of Connors and Smith’s pyramid. However, to get to different results, you need different actions. It’s the actions that lead to the results – but what leads to the actions?

Our beliefs lead to our actions. Certainly, there are mitigating factors like skills and motivations, but fundamentally, we will act out our beliefs if we’re not influenced by anything else. Similarly, if our beliefs aren’t right, then they’ll pull our actions back. We can “fake it” with our actions for a time, but ultimately, we’ll revert to our core beliefs. That leaves the question about how we develop our beliefs.

Shortcut to the Top: Behaviors Only

In today’s VUCA (volatile, uncertain, complex, and ambiguous) world, we often look for the shortcut, the quick answer, and the easy results. That’s what happens when organizations decide to skip over experiences and beliefs and jump solely to actions while hoping to get results. While this strategy may work in the short term, over time, the pressure to perform actions in congruence with beliefs becomes stronger.

It’s like diets. They work for a while, but for the most part, they fail in the long term, because they’re working on the surface problem instead of the core beliefs. Reports are everywhere about people gaining more weight than they lose, with only a few who manage to keep weight off for more than 3 years. Eventually, the core beliefs that make up the person’s eating habits erode the logical control of their actions. (See The Happiness Hypothesis for a model for how our beliefs – or emotions – can override our conscious control.)

If you want to change the beliefs of the people in the organization, the path is paved with experiences that clearly indicate to everyone what the beliefs you want them to hold are. There are four levels to experiences:

Culture and Alignment are a Process

Creating a culture is hard enough, but it’s even harder to maintain that culture when the organization grows and changes. It’s hard to build the experience into the lore of the culture – a permanent and unmistakable message about what the organization believes. When Johnson and Johnson pulled all the Tylenol off the shelves of every store in the United States as the result of a few tampered packages in Chicago, they sent a clear and unmistakable message that the safety and health of their customers was more important than profits. This incident ended up becoming a part of corporate lore – and more broadly to the world around the organization in this case.

Neither culture nor alignment is a “one and done” type of project. Instead, it’s necessary to continue to work at them long after the process has started and reached a level of success.

Some feedback will be baseless. Some will have a foundation but won’t rise to the measure of being relevant. Overall, you’ll have to decide whether the feedback warrants your attention – but give it the benefit of the doubt when you can. At the very least, you can validate the feedback with others and see whether it’s something that you’ll need to address or not.