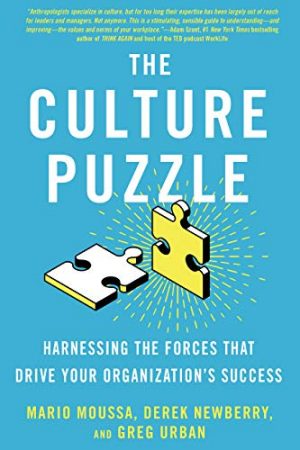 It truly is a puzzle.  What makes some organizations stellar and others barely able to keep their doors open?  How do you fit the pieces of an organization together to survive in this VUCA (volatile, uncertain, complex, and ambiguous) world?  These are the questions that The Culture Puzzle: Harnessing the Forces that Drive Your Organization’s Success wants to answer.

Seth Godin wrote a whole book on tribes, Tribes: We Need You to Lead Us, which explains how tribes form and what it takes to get them moving.  However, another key concern for organizations is just how many tribes they have inside their walls.  Organizations, particularly those that grew through acquisition, find that they have different tribes in their organization, each with their own goals, rather than one big tribe in which everyone in the organization is a member.

When the Skunk Works was started at Lockheed, it was intentionally separated from the main organization.  What Kelley Johnson was trying to do needed to be different to succeed.  He intentionally created a new culture to replace the fragmented cultures that existed in the main organization.  Inside of the Lockheed walls were multiple cultures.  Engineers and machinists all had their own tribes – and they didn’t really get along with the other tribe.  Kelley Johnson wanted something different.  He wanted one Skunk Works tribe that had a singular mission, not competing tribes.  (See Skunk Works for more.)

The challenge of multiple tribes inside an organization can be the result of different histories and training, or it can be a failure for the leadership to establish a shared vision.  It can be that, in the absence of a compelling shared vision, individuals and teams have been forced to define their own visions – and that results in different tribes.

It’s like a climb up a mountain to find a guru.  Leadership teams head out to strategic retreats where they believe with the help of their skillful facilitator, they’ll discover the hidden meaning for the organization.  With this knowledge firmly placed in their brains, they believe – incorrectly – that they need just to share the epiphany, and all will be good.  Everyone will instantly share their vision.

There are numerous problems with this shared delusion.  In fact, the delusion is shared more than the sense of the shared vision of the strategy.  Too often, strategies devolve into platitudes that mean nothing.  (See The Fifth Discipline for the challenges of using platitudes.)  It turns out that everyone has a slightly different view of the strategy that was created, and the result is that when the message is communicated to the rest of the organization, these differences in understanding are amplified.

Instead of the shared behaviors that the organization desires, we are left with behaviors that are perceived to be minimally necessary instead of those of an engaged team striving for the same goals.  The behaviors that drove the Skunk Works’ stunning success are noticeably absent as sharing is only done when it’s believed that there is no other alternative.

Trading is one of the keys to organizational life.  Influence Without Authority explains that no one ever has enough authority to accomplish everything they want to accomplish, so they have to do it through influence, and one of the best ways to do that is to capitalize on the law of reciprocity.  Quid pro quo is the law of the land, and it means that to encourage success, you’ve got to encourage cooperation.

Robert Axelrod ran a contest of computer programs to see which strategy would achieve the best outcomes.  It was patterned on the prisoner’s dilemma: two criminals are captured, and if they rat out their compatriot, they’ll get a shorter sentence – unless their compatriot rats them out, too.  Clearly the best case is for both parties to cooperate, but there’s always the risk that the other party will defect.  The results of his contest showed that tit-for-tat was the winner.  Starting by cooperating and then doing whatever the other program did on the last turn yielded the best result.  In short, if we want to be successful, we need to cooperate.  (See The Evolution of Cooperation for more.)

Francis Fukuyama expresses the same need for sharing in Trust: The Social Virtues and The Creation of Prosperity from the lens of our need to trust one another.  If we can’t trust each other to be cooperative, then we aren’t going to be as agile or as effective.

Never An Open Office in the Mind

I shared my concerns about the open office concept when Richard Sheridan promoted it in his book Joy, Inc.  I shared in my review of How Buildings Learn that many others, including Steward Brand, were concerned about open offices as well.  It turns out that open offices aren’t really what people want.  Even Les Nessman in the classic WKRP in Cincinnati knew the value of having a space with walls.

What we know about open office spaces is that people attempt to construct walls in their minds to compensate for the walls that are missing in their environment.  They work to create a safe space where they can work uninterrupted.  Sometimes they’re successful and can enter flow – and sometimes they’re not.  (See Flow, Finding Flow, and The Rise of Superman for more on flow.)

When I was younger, Jack Welch, and his meteoric leadership of GE, was all the rage.  He recommended placing groups and even individuals in competition with each other.  The competition for ranking and resources was a part of the game.  The problem is we’ve seen that this strategy no longer works today.  Employees want to feel safe.  (See The Fearless Organization for more.)  The management strategies that Welch used left him with the nickname Neutron Jack (after the neutron bomb, which kills living things and leaves infrastructure intact).  As Fredrick LaLoux explains in Reinventing Organizations, organizations are changing in the way they’re led and the way they’re managed.

Today, few people would recommend having people or groups internal to an organization competing with another.  Some haven’t made a full transition to cooperating and have stopped at a sort of midpoint – coopetition – which is a mixture of both cooperation and competition.  However, the research points to cooperation being more effective than competition in most situations.

Inspiration has a lore surrounding it.  The idea is that the best works that have ever been created have been the result of inspiration.  Inspiration is certainly a positive feeling.  It drops someone into flow and gets them to create some of their best work.  There’s nothing wrong with that.  Inspiration is a definite part of the creation of great works.  However, the problem is that inspiration is few, fleeting, and fickle.

Pasteur said that “chance favors the prepared.”  In short, things that look like luck and inspiration come most frequently to those who have put in the work to take advantage of these opportunities.  Work for a better culture, work to collaborate, and just work in general increases the chances that you and your organization will be able to assemble The Culture Puzzle.