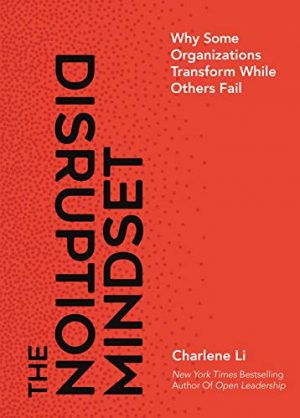 Disruption isn’t the goal.  Growth and success are.  However, the path to growth often leads through disruption.  Charlene Li explains in The Disruption Mindset: Why Some Organizations Transform While Others Fail how to navigate the disruption and even encourage the right disruption to lead to the desired exponential growth.

Anyone can be disruptive; it takes a powerful person to be the right kind of disruptive at the right time to achieve the exponential results which investors often expect – whether you’re a startup or a large organization.

The fuel that drives disruption is the willingness to find and address the unmet needs of the customer.  Whether you’re disrupting the home movie business like Netflix or you’re a wireless carrier trying to capture new subscribers like T-Mobile, you’ve got to find the needs the customer has that you can meet and your competitors can’t.  If you do it right, you can leapfrog the competition.

There are lots of ways that people pursue understanding the unmet customer needs.  For instance, Business Model Generation proposes a business model canvas.  Clayton Christensen in Competing Against Luck proposes a model of jobs to be done.  Tom Kelley’s The Art of Innovation proposes a human-centered design process that is also a discovery process.

My experience is that this process of discovering the unmet needs of the customer is the most prone to error and ultimately failure.  Time and time again, I’ve seen technology companies propose that they know what the customer’s needs are only to discover that they didn’t really understand the problems – but no one else in the process could see the failure to fully understand before it became a problem.  The future planners, focus group leaders, researchers, and marketers weren’t able to make a coherent picture from the signals they were receiving, and as a result, they made something up that they thought would be “cool” or interesting, and no one else realized that it was fiction until way too late.

If you’re going to disrupt an organization, you need a rallying cry.  You need something that people can get behind.  There’s a shared delusion that many corporate leaders subscribe to.  They believe they can control a disruption or transformation.  They believe it’s possible to architect, design, and deploy a plan that’s so perfect that it will fit every member of the organization in every situation.  Since the Agile Manifesto, we’ve realized that this isn’t truth, but it’s comforting to believe that we’re in control.  (See Compelled to Control for more about the illusion of control.)  Li suggests that anyone can write a manifesto to inspire the disruption that the organization wants and needs.  It has these components:

The key is to help everyone believe that the leader isn’t thinking about the disruption alone.  They’ve got an inclusive approach where everyone will benefit from the changes.  In Li’s words, “leadership is a mindset, not a title.”  Joseph Rost in Leadership for the Twenty-First Century agrees.  He even goes further to say that it’s a relationship towards the end of meaningful change.  In short, you can’t be a leader if you don’t intend to change – and improve – with others.

Many organizations have fallen into the trap that they need consensus.  Thomas and Kilmann created a conflict mode instrument that places five options: avoiding, accommodating, competing, collaborating, and compromising on two dimensions: assertive and cooperative.  The interesting aspect of their instrument is that the best answer isn’t in the upper-right corner, as one might expect.  Collaborating to the extreme is consensus.  Their model (and research) focuses on the best answer as compromising.  They don’t mean it in a pejorative way; instead, it’s a recognition that consensus-driven approaches often take too long.  Sometimes, we have to just trust others even when we can’t defend the decision.

We see this echoed in the work of Patrick Lencioni in The Advantage, in Crucial Conversations, and in William Issacs’ work, Dialogue.  Consensus can take too long.  We need to build and reinforce trust when we can so that we can lean on it when it’s necessary to move faster than a consensus-based approach would allow.  (See Trust => Vulnerability => Intimacy, Revisited for more.)

Some cultures invite constructive criticism.  Some even require it.  On the outside, the cultures may seem harsh.  In Radical Candor, Kim Scott explains that “it’s not cruel, it’s clear” when speaking directly to other people.  Cultivating these conversations requires work.  It’s a step beyond the psychological safety that Amy Edmondson proposes in The Fearless Organization.  It’s imperative to share concerns and to speak up.  Back in 1977, Irving Janis and Leon Mann first wrote about “groupthink” and the challenges that occur in groups in their book Decision Making.  Since then, Richard Hackman revisited the challenges of sharing the truth in Collaborative Intelligence.  They recommend that someone be assigned the role of the devil’s advocate – that is, someone should be tasked (temporarily) with trying to poke holes in the proposed direction.  Even John F. Kennedy took this approach with the Cuban Missile Crisis after the fiasco that was the Bay of Pigs invasion.  In One Minute to Midnight, there are details about how dissent wasn’t a problem, it was required.

Dave Snowden, of Cynefin fame, describes this process as ritualized dissent, something that he often teaches at workshops.  By making it an explicit part of the process, it’s often possible to avoid someone being singled out as the naysayer.

Organizational charts and organizational structure aren’t something new or interesting to anyone involved in a corporation.  The tree-view charts, with who reports to whom, have been a part of the corporate landscape for decades.  Structure is part and parcel for corporate life.

Organizational policies, procedures, and processes are common as well as everything that can be done can be turned into a collection of policies, procedures, and processes.  It’s standard corporate fare – that startups often sidestep in the interest of expediency.  However, there’s another component that’s important to organizational health: the lore.

If you want to radically disrupt the culture of an organization, you need the stories to be different.  It means replacing the stories that no longer match the desired culture and supplementing the stories in places where the culture won’t grow as you desire it to.  While this can be tricky, confusing work, it’s work that needs to be done if you want to change the hearts and not just the minds of everyone involved.

To make the kinds of changes that our world needs today, you may just find that it takes The Disruption Mindset.