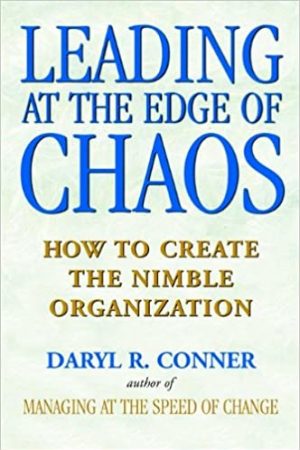 My first highlight from this book is “Stability is no longer the prevalent condition of our age.” That’s a simple and profound truth as we must find ways to cope with the constant change we’re in while simultaneously leading our organizations and families. That’s what Leading at the Edge of Chaos: How to Create the Nimble Organization is all about. It’s about leading our organizations through change. In it, Darryl Connor (who also wrote Managing at the Speed of Change) puts forth the proposal that organizations today need nimbleness, resilience, human due diligence, and execution.

Change – For Better or Worse

In today’s world, we’re faced with change whether we like it or not. While there’s a long list of folks who say there’s a 70% failure rate with change efforts, there’s still relatively little attention paid to the biggest blocker of change: people. What is more concerning is that few people are minding the hen house as changes continue to fail and therefore represent unnecessary expense and turmoil for the organization. Even those changes that are “successful” fail to produce the intended value, therefore failing to return on their investment to the organization.

The return on change – like return on investment – is a factor of both the cost to implement the change and the benefits that are received. Not all the costs are hard dollar costs. Some of the costs are the mental energy that the process sucks up from employees, vendors, and customers. These costs are often substantial even for change projects that aren’t funded with much money.

Consider that there is transition and uncertainty in any change, which necessarily causes a reduction in production. This trough of productivity can encourage burnout (see Extinguish Burnout). It can deprive the organization of the sales and therefore cash it needs to survive.

The return on the change may similarly be non-monetary. Some changes will result in a more pleasant work environment, more future stability, or less operational friction. All these are great outcomes that don’t show up on the bottom line.

The Dynamics of Change

We perceive solid objects as, well, solid. The trick is that they’re still mostly empty space. It’s just that the atoms and molecules form a pattern that doesn’t adjust very easily. The atoms themselves are a dense center with spinning electrons circling them. This creates the illusion of space consumption and, in some cases, solids. Much of what we see as constant is really a set of overlapping and joining oscillations that are, for the moment, in one state; but in the next moment, they may change altogether.

Even in the coldest of our winter nights, we still are bustling with energy. We see water change from liquid to solid and believe that nothing is happening; yet, down to -273.15 degrees Celsius, there is still energy vibrating the atoms. We must learn to not only anticipate change but to accept that we’re standing on constant changes.

The great challenge to all this is that, as humans, we are prediction engines. (See Mindreading for more.) We try to predict the future to reduce the potential for future harm. We believe that our predictions allow us to control or shape the future. (See Compelled to Control for more on our need to control.) To acknowledge that what we think is real is just an illusion created in our brain is disconcerting for most of us. (See The Hidden Brain and Incognito for more.) It means that our ability to predict the future is very, very limited. Philip Tetlock and Dan Gardner explore the limits of prediction in Superforecasting, but their predictions operate at the level of organizations – and the struggle of lost predictability is personal. It’s our ability to maintain our belief that we’re safe.

Change In and Across Systems

The changes that we find in organizations occur at a micro level within a person or a team but ripple across the entirety of the organization. Some of the changes that we try to accomplish reside inside a single individual. It’s a change to reduce destructive behaviors or enhance productive ones. However, those changes impact the dynamics of the others in the family. Often with people afflicted by addiction, their recovery disrupts the network of relationships they have, including friends and their families. Their former friends lose a drinking buddy. The family regains a parent or child but often to the disruption of the routines that were already established.

The changes we make may be focused locally but will ripple outward to other systems. Conversely, the changes that we desire to make across systems all come down the need for individuals to change their behavior.

Every system has limits to its operation. (For a primer on systems, see Thinking in Systems.) I remember my high school chemistry class. I loved it. I loved the idea that you could mix things together and get other things. I also vividly remember that reactions didn’t work outside of a PH range. If you wanted the reaction to occur, you had to be in the range – and if you wanted to prevent it, all you had to do was drive the solution out of the range. While the specifics are related to chemistry, the general case applies to every category of systems – human, organizational, societal, etc. They only work in a range. When the environment changes the system may or may not work.

Organizations, by their nature, develop a set of systems. Michael Gerber encourages the creation of systems in his classic book, The E-Myth. These systems will continue to work right up to the point where they fail. Nassim Taleb warns of spectacular failures in The Black Swan. In the end, change masters are ones who can see the systems that are going to break because of changes – before they completely break.

The opposite end of the spectrum are those situations that push people and organizations to grow. Taleb’s follow on book to The Black Swan, Antifragile, explains how systems can be designed to push the limits and grow from the process. It’s not that pushing people to the edge of – and occasionally beyond – their comfort is easy or for the faint of heart. However, ultimately, it’s this process of constantly extending capabilities that allows individuals and organizations to become more resilient and survive over the long term.

In The Rise of Superman, Steven Kotler explains how the seemingly superhuman feats of athletes are simply the progression of their abilities over time. If you work at the limit of your capability and grow consistently, you’re bound to end up doing things that most people don’t believe are possible if you are simply given enough time.

Success – in the market and in life – is then simply a matter of guesswork, pushing the limits, and waiting for the long odds to eventually come in. You can’t expect that you’re going to hit a home run. They’ll happen occasionally, but they’re difficult to do consistently. Instead of hitting home runs, working to consistently get on base ultimately gets you the most runs. It’s about working towards your goals in the long term and accepting that everything you do today is a guess as to what will lead you to those goals in an increasingly uncertain world.

So, on the one hand, you can’t predict the future, and on the other hand, you must work towards the future even if you don’t know exactly what it will be.

Often, the simple solutions are better, because they don’t require the kind of build up and support that complex solutions do. Consider for a moment the need to turn over a can. It’s simple to build a machine that grabs the can and flips it over. It could even move it from one place to another. However, if you want to flip every can at scale, you can simply induce a half-turn spiral into the process. It will rotate the orientation of the cans 180 degrees both reliably and quickly. The problem of flipping over all the cans can be solved in a complex way or in a simple elegant way. Often in change we skip over the simple and elegant on our way to the complex and difficult.

Leaders: Live Your Own Life

Sometimes, the problem with change isn’t a change problem at all. It’s a problem where a leader feels like they didn’t get to do something, and as a result, they’re reliving the experience through their organization. In my review of The Available Parent, I shared the story of a man whose daughter had to play soccer, because he missed out on a soccer scholarship. These kinds of misses occur at work too. A manager who didn’t get a chance to play with some new technology may chose to invest in new technologies when the right response is proven methods of success.

It’s sometimes called agility, and it’s about adapting to change. When organization become too bureaucratic and rigid, they invariably become misaligned with the world. As a result, they soon wither and die. When change was infrequent, these eventual deaths were often looked upon with the reverence of an old friend who had retired. In today’s constant change and turmoil, these losses start to resemble people who left before their prime – or even before they could be fully known.

Being nimble is about increasing the organization’s capacity for change such that it’s possible to capitalize on more benefits for more change with less future shock and frustration.

Of Conner’s concepts, this is the one which I have the greatest struggle with – not because I disagree that resilience is important, because I know it is. Nor is it because I don’t think that he relates good points. I struggle, because I believe his coverage misses the key aspects of resilience. Rick Hanson’s book, Resilient, does a much better job overall – which is to be expected, since he dedicated the book to that premise.

Where Conner is focused on seeing people as being more optimistic or having a realistic belief that they can succeed, I believe that learning self-efficacy and trusting those who care for us has more to do with resilience than focusing on opportunities. (See Trust=>Vulnerability=>Intimacy, Revisited for more.)

What Conner now calls “human due diligence,” he called “assimilation points” in Managing at the Speed of Change. The point that people can only cope with so much change is accurate – but providing it with a trademarked name seems a bit over the top to me.

While not much is said about execution other than the expected statements about grit and determination, execution is a key part of any change. (See Grit, The Four Disciplines of Execution, and Willpower if you’re interested in learning more about execution.) For your execution, perhaps it starts with reading Leading at the Edge of Chaos.