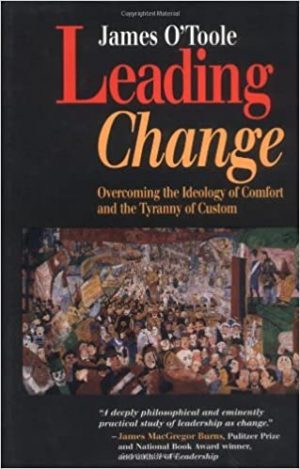 Change needs leadership. To be a leader, you must be willing to change – both yourself and the organization you lead. It’s in this intersection that Leading Change: Overcoming the Ideology of Comfort and Tyranny of Custom shines. It’s a no-holds-barred understanding not just of change and why change efforts fail but also of leadership and how one expresses it in a world where command and control is no longer the rule. Other works like Leadership on the Line include subtitles like “Staying alive through the dangers of change” but fail to weigh in on the broader issues of leadership, at least in a substantive way.

Most of the time the disciplines of change and the study of leadership don’t cross. One can look through classic works like McGregor Burns’ Leadership and Rost’s Leadership for the Twenty-First Century for an understanding of what leadership should be. Robert Greenleaf describes a form of Servant Leadership, and Chris Lowney describes the Jesuit approach in Heroic Leadership. Daniel Goleman provides his context of the emotionally intelligent leader in Primal Leadership. John Maxwell has his 21 Irrefutable Laws of Leadership. And those are just some of the books where the word “leadership” is in the title. Bookstores are filled with scores of books that seek to distill the essence of leadership for readers.

Leading Change offers several definitions of leadership, including President Eisenhower’s “the art of getting someone else to do something you want done because he wants to do it.” Later, they nudge this definition to include an awareness of what the followership wants. In fact, they share Drucker’s one characteristic common to all leaders: followers. (Rost would be proud.) And so, the idea of what people think leadership is – and isn’t – is woven through the text like the threads that make up a tapestry.

Leading Change offers no new model for how to get change done. It leans on the development of leaders to get the change done in their organizations. However, it does offer 31 core reasons why people resist change:

As a catalog of potential resistance, it has more depth than Kotter’s Buy-In. It’s a wonderful listing to review whenever you perceive that you’re encountering resistance in your change project.

The Paradox of Leadership

The best leaders are therefore adept at listening to their followers and constituents to hear the underlying problems and find the underlying solutions. Upon finding these solutions they must make everyone feel as if it’s their idea. Leading Change speaks of the resistance to Peter Drucker’s work at GM as having been Drucker’s work – and not theirs. It also speaks of a judge who proposed alternative sentencing on the grounds that “he thinks that he’s smarter than everybody else.” Leaders who can’t convince others that the plan is their plan has little chance of being successful.

When anthropologists studied various cultures, they never saw change as a normal part of the society. Societies – like organizations, it seems – are naturally resistant to change. They’re designed to maintain the status quo for as long as possible. So, when we’re leading a change, we must realize that the system – but not necessarily the people individually – will resist that change.

Because change is not natural, we need leaders to help us navigate through it. Perhaps the best thing you can do to get started is to take a read of Leading Change.