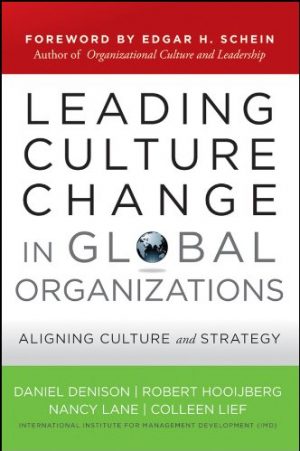 Daniel Denison and his colleagues, Robert Hooijberg, Nancy Lane, and Colleen Lief, are focused on how to change the culture of global organizations. Far from the approaches that work for individuals and aware of Peter Drucker’s statement that culture eats strategy for lunch, they are Leading Culture Change in Global Organizations: Aligning Culture and Strategy. (Drucker’s comment is sometimes quoted as culture eats strategy for breakfast, but there doesn’t seem to be a definitive source for this quotation.)

On the Shoulders of Schein

The book starts with a reminder of Edgar Schein’s work through “Either you manage the culture, or it manages you,” and “The importance of distinguishing underlying assumptions from values and behaviors, or superficial artifacts.” In short, there’s something happening below the surface of your activities, and you ignore them at your peril. Change the Culture, Change the Game shares a similar model focused on how to change the experiences that people have to shift their beliefs, so that you can get the right actions and the right results.

They continue to quote Schein in saying that effective cultures always need to solve two problems at the same time: external adaptation and internal integration. That is to say that culture must adapt to changing conditions outside the organization as well as the aspects of the organization which naturally change.

Back in 2015, I wrote a post about organizational chemistry, in which I explained that the components of culture are the people of the organization and the environment. While this may an oversimplification, the core understanding that culture is a changeable thing is critical to being able to accomplish the goal of moving change from the relatively infrequent periods to the current state where change comes continuously. If you can’t change the culture, you’ll constantly be fighting a losing battle as you seek to introduce change at a rate faster than the organization can accept. It’s what Darryl Conner calls Future Shock in Leading at the Edge of Chaos.

In addition to the challenges of articulating culture, there’s a deeper problem of learning how to create it.

The Toyota Production System (TPS), Lean Manufacturing, and the Transformation

In Taiichi Ohno’s Workplace Management, the architect of the Toyota Production System and lean manufacturing explains the key points to the system. He makes no attempt to hide or obscure concepts. Still, the gap between knowing how the system works and transforming your organization to it remains large. The truth is that the system that evolved into lean manufacturing challenges the kind of deeply held and largely unconscious assumptions that Edgar Schein warned us of.

Even if you know exactly how you need the system to operate, the way you can change the system to match that new configuration may remain a mystery. While concepts like only producing what you need, receiving parts just in time, and supporting frontline workers stopping the line, there are decades of experience built up that these things aren’t safe or right.

Don’t Burn Down the House

Darryl Conner, in Managing at the Speed of Change, relates a story of an oil rig explosion and a literal burning platform from which a man jumped and survived. Since then, people have stated that you need to have a burning platform to get the change started. Kotter’s first step is to create a sense of urgency. However, there’s a challenge to be overcome where you must create a sense of urgency but in a way that doesn’t create too much stress so that people can’t think or shut down. (See Drive and Why Zebras Don’t Get Ulcers for more on the impacts of stress.)

The goal is to provide a motivating path forward, something that draws people in rather than leaving them little choice except to jump. Of course, there are times that require a leap from the organization, but using that as a primary strategy tends to burn up your credibility and burn people out.

The Quick Turn and the Slow Burn

The first decision to make when changing a culture is whether the cultural change will be a quick turnaround or whether it will be a transformation – a slow burn. Both approaches have their challenges and consequences and rarely is it clear which solution is best. Should you gradually pull off the Band-Aid, or should you do it quickly and get it over with? The answer depends upon the situation and whether the Band-Aid is a literal or a figurative one.

Some situations are conveniently illustrative. When you hire a turn-around CEO when the organization is hemorrhaging cash, the choice is clear. Similarly, an institution with a long history of trust and prestige or a government organization will necessarily require a longer-term approach. Ultimately, leaders must pick an approach and accept the consequences of the choice they pick.

Ultimately Denison’s approach is based on his Denison Organizational Culture Survey. It has four main areas (quadrants), each of which has three sub-components:

These are the key ingredients of Leading Culture Change in Global Organizations.