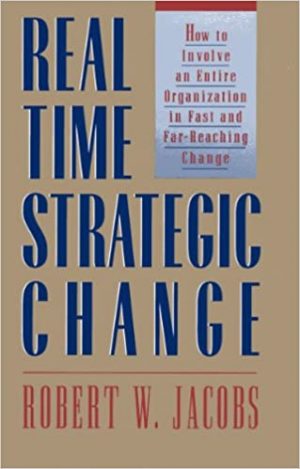 In the game of buzzword bingo, this book has it all. Real Time Strategic Change has all the words that people want. They want the change to happen now (or in real time), and they want it to be strategic. Wouldn’t it be nice if all change could be that way? However, there’s a big commitment that’s required to make this work – and it’s one that most organizations aren’t willing to make.

Real Time Strategic Change is based around the idea of an event where you gather a substantial portion of the organization and you engage them in the change design process. It can be the entire organization, an entire plant, or an entire division, but the whole point is that it’s a substantial percentage of the people impacted by the change. Even when it’s not practical to bring literally everyone in, the recommendation is to bring in many people.

The sessions are planned, but more than that, they’re designed as facilitated sessions, where the conversations are supported and guided but not scripted. The result is, after the event, everyone feels like they’re on the same page, the leadership has listened, and everyone is in it together. I have no doubts that the results of the approach are impressive. When you make that sort of an investment, people are quite clear that you’re serious, and they’re clear that something different is happening. That means the organization is going to see some degree of positive results from the change.

Most people who write about change are clear that executive leadership is key. They must be bought in. They must support the change with both their words and their deeds. Equally important is the ability for the leadership to listen to the needs of the people. Jim Collins in Good to Great highlights this ability to listen and to stay the course as the Stockdale Paradox.

While changes are easier when there is leadership support, it’s not the only way to get change done. It’s just the easiest way. Of course, that means the likelihood of success goes up. When your organization makes a commitment to a real time strategic change, even the commitment is big, the risk is high, and the results are more likely to be positive. While the event itself may be effective, the signal that the investment in the event makes may be a more powerful message to the organization that “this time, we’re serious.”

Everett Rogers explained in Diffusion of Innovations that once you get past the innovators, everyone else needs proof – and progressively more of it. The event provides a great deal of proof, very rapidly.

One of the key things that is addressed by the event is the tendency towards not invented here (NIH). This is the natural tendency of people to resist things that they weren’t consulted on, or at least informed of, ahead of time. It has been talked about in business books for decades. By engaging everyone in the process of designing the new strategies and change, they necessarily feel like they’re a part of it, and this side-steps the NIH problem.

Solving NIH fits neatly into the communications problem that is often cited as the second most important aspect of a change endeavor. Solving NIH solves both the understanding of where things are going and the conversation about what the impact will be to the employee. The conversations and concerns about the person’s role in the new organization are most frequently addressed, because they feel like they’ve already been a part of the change, so they’ll continue to be a part of it. That’s good news, since the conversations about whether they will be a part of the new structure often require a substantial amount of trust.

Above or Below the Line

In my work on adoption and change over the past few decades, one subtle difference has stood out as being powerful for whether the change would be successful or not. If the required change was inside the person’s normal scope of work, the change would normally take hold. If, on the other hand, the change was something that required additional effort for the person, it rarely worked.

Said differently, if the changes were above the line of requirements – thus not required – they’d be ignored or deferred. If they couldn’t get their job done without it, well, obviously it worked. In information management projects, getting users to enter metadata is always challenging. However, when entering the metadata is a natural part of the work that someone does, it just happens. If on the other hand, you’re asking them to go back later and do something different, special, or additional, it rarely happens.

The required change needs to be seen as a part of the person’s “real work.” If it’s not seen this way, if it’s perceived to be something they do only when they have time, then it’s not likely to get done. Getting folks to accept changed behaviors as a part of their real work is more than changing a job description or telling them, it’s about how they perceive the work.

All change is personal. All change happens at an organizational level through individual changes at a personal level, and sometimes those changes are hard. Consider the truths from Change or Die, which exposes us to the fact that few people change their eating habits even after a heart attack. Or perhaps you’d prefer to consider The Power of Habit or addiction via Chasing the Scream. Change is hard, because individually changing is hard.

Most executives have come to their level in the organization through a string of successes. Their skills, intuition, and capabilities have led them thus far. The idea of changing them to get better is hard. However, as Marshal Goldsmith says, What Got You Here Won’t Get You There. It isn’t always easy to convince folks of this simple truth. They may need to change (and become uncomfortable) to reach the next level.

Putting Things Together in Different Ways

If you consider innovation and transformation back from the Renaissance (see The Medici Effect) to the current age, you’ll find that the key to change was in the ability to connect different ideas. (See Creative Confidence, The Innovator’s DNA, Extraordinary Minds, Beyond Genius, and Group Genius for more on current innovation.) One of the benefits of having a large number of people working on things is that you get extra time for lots of potential combinations and approaches. You can sometimes leverage The Wisdom of Crowds to get to a better answer than would be possible with the leadership alone.

All Effective Strategy Degenerates into Work

One of the largest challenges I see in organizations with their grand strategies is the conversion of those strategies into a series of tactics and, ultimately, actions and behaviors. A strategy that’s beautifully printed and placed in a binder is useless. It’s true that the devil is in the details, and the conversion of the strategy into tactics and tactics into behaviors is hard, grueling work. However, it’s also true that the strategy is useless without it.

The event engages people into practical answers that degenerate more easily into the work that needs to be done, and there are fewer of those “and then the magic happens” spots in the plans. Real people doing real work are really engaged with converting the idea into a reality.

No matter how great the strategy work is and regardless of the skill at which it is degenerated into tactics, because the future is unknowable, there will be a need to make constant course corrections and adjustments. What we know about real time strategic change is that it doesn’t end when the event ends. Change needs to become a part of the ethos of the organization. Maybe it’s time to start by reading Real Time Strategic Change.