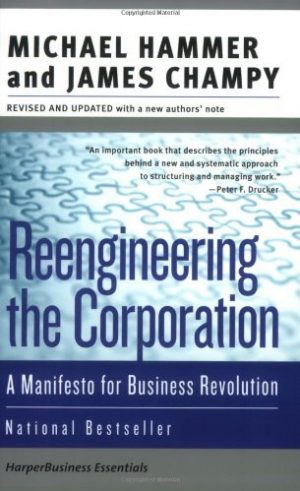 Evolution, it seems, doesn’t follow one slow, methodical path towards progress. It stalls. It leaps. What we see as a smoothness is an illusion caused by the distance of time. Even evolution reaches points where slow and steady won’t win the race. Instead, it’s time for something radical to happen. That’s what reengineering a corporation is. It’s a radical change. Reengineering the Corporation: Manifesto for Business Revolution is a guide to this radical process that organizations must go through at some point – or several points during their lifecycle.

Because the term “reengineering” has been so broadly used, it’s been used inappropriately. In some circles, it’s equated with layoff and reasons why people lose their livelihood. However, reengineering doesn’t mean doing things with fewer people – it can mean doing more with the people you have. Similarly, it doesn’t mean the kind of slow, incremental improvements that continuous quality improvement (CQI) cycles mean. (See Plan, Do, Study, Act as an example of a CQI cycle.)

To be sure, the Industrial Revolution granted a great deal to humankind’s material wealth. (See Capital for more.) The combining of steam power, standardized parts, and automation made it possible to make many more of the things that people needed. When Henry Ford started with his corner of the industrial revolution, he added new components like the moving assembly line and, perhaps more importantly, the breakdown of tasks such that people could be trained to do them quickly.

Ford’s growth meant pulling in more people, and the more people he pulled into his organization, the further outside his circles he had to go. The population of the United States had not yet migrated to large cities, and as a result many of the people he was hiring were sons of farmers or hired hands. They had little or no manufacturing background and often not much schooling.

The solution was to divide each task so small that you could teach a man to do the job quickly. If he didn’t work, he could be replaced just as quickly, like defective parts in a machine. The problem is that this lost the wholistic view of the process and, importantly, how one person’s behavior impacted another person and the customer.

Most people thought in their small world. Their department was the scope of their involvement in the organization, and as they seemed to be doing their thing, all was well. This, however, ignored the downstream consequences they couldn’t see. They weren’t thinking about systems of interaction, and the system suffered. (See Thinking in Systems for more about systems.)

The radical view that drives reengineering is undoing the damage that was done with the Industrial Revolution and restoring accountability to a team for the total output rather than just their part. By becoming focused on how the customer experiences the organization rather than their responsibilities, they can sometimes radically improve the performance of the organization.

This isn’t an easy task, as every department manager or director wants to protect their fiefdom. It’s hard to find people who have enough authority to really pull of the kinds of radical changes that can mean huge savings.

I grew up in manufacturing. My mother would take us to the American Production and Inventory Control Society (APICS) meetings. They would have them at Holiday Inns, and we’d go swimming while they’d learn all about the latest innovations. Well, they were the latest innovations that we Americans would accept as many of them were started by Demming – an American – who had to go to Japan to find a willing audience.

One of the innovations was to organize manufacturing into cells. The cell would have a person or a team running a set of machines that completed an entire part – or at least a major aspect of the part. This didn’t require much more training, and the results were generally higher quality and better performance. (See Taiichi Ohno’s Workplace Management for more on manufacturing ideas.)

This approach flew in the face of traditional manufacturing thinking about breaking jobs down into small parts, but it worked. It worked because it reduced the friction between steps both in terms of distance and in terms of communications issues.

This is at the heart of reengineering. It’s testing your assumptions about the best way to do things and sometimes trying things that seem to fly in the face of conventional wisdom.

It was the 1980s and 1990s when it became popular to flatten organizations and remove middle management. Organizations had quietly amassed people who were becoming human bridges to make the process work, and the work of coordinating the work was becoming more challenging than the work itself. The diseconomies of the Industrial Revolution didn’t show up directly on the manufacturing line. Everyone kept optimizing for each step. Instead, the diseconomies showed up when one department needed to interact with another department, the problems had to be smoothed out, and the critical information had to be communicated.

It’s because reengineering tends to reintegrate processes and remove layers of management that it’s often seen as a ploy to justify a layoff. However, done effectively, it’s quite possible that everyone in the old management structure may be deployed – to productive activities.

Invariably, when you integrate multiple departments and positions inside a process into a smaller group of people, you’ll see speed increase – and you’ll increase the amount of knowledge necessary to do the work well. The fact that it was perceived as difficult to train people led to breaking jobs down into component pieces in the first place. If you’re going to integrate a process, you need to be able to educate people better – and support them better.

The work of Malcolm Knowles and his colleagues on The Adult Learner only goes so far. The research into Efficiency in Learning isn’t enough. Often, particularly in what Richard Florida in The Rise of the Creative Class calls “creative class” jobs, it’s necessary to find ways to decouple the necessity of knowledge from the individual contributors. Instead of breaking the task down, however, reengineering triages the complexity of the tasks. Some things fit the models so well they can be automatically addressed. Other things fit the models well enough that a generalist can take care of it. (See Range for more on why being a generalist is a good thing.) Only the truly difficult cases require the specialist and their unique knowledge. Here, experts become resources to the people who are processing the volume of the task.

Better yet, where possible, the tacit knowledge that resides in the experts’ heads is made explicit. This can be in the form of guidelines, flowcharts, or other explicit documentation about what to do and when. (See Job Aids and Performance Support for more on aids to performance that aren’t people or learning.) This is an important aspect of managing knowledge effectively, as, too often, the corporate expertise walks out the door when the experts do. (See Lost Knowledge for more on tacit knowledge and the need to convert knowledge to explicit knowledge.)

Even when explicit knowledge is available in some repository, that doesn’t eliminate the need for experts. Only so much of what we know can be converted to explicit knowledge, and that’s why it’s important for reengineering success to leverage knowledge management strategies that take advantage of both content and connections to experts. (See The New Edge in Knowledge for more on content vs. connect.) The truth of the matter is that some expertise is just expertise and transferring that to others is difficult. (See Sources of Power for Gary Klein’s research on recognition-primed decisions and why they can’t be easily taught.)

One of the other aspects of reengineering is to reverse the process of creating controls for processes. What typically happens in an organization is that someone abuses a policy, so the policy is tightened. Sometimes, it’s tightened with additional checkpoints and oversight. The controls that are added to prevent abuse do, however, come with a cost.

The tight reigns of traditional approaches are replaced with looser controls that tolerate a larger degree of abuse but have controls to prevent it from getting out of hand. This makes financial sense, because the costs for controlling things such that they can’t be abused is higher than the cost of accepting some abuse. This greater flexibility implies trust with limits. (See Trust: Human Nature and the Reconstitution of Social Order for more on the impact of trust to economies.)

Much has been written in the past few decades about the importance of empowering workers. It’s about getting their minds involved as well as their bodies, they’ll say. It’s about allowing people to make decisions without “running them up the ladder.” Empowerment addresses both agility and capacity. Because authority is diffused, it’s possible to get answers quicker and respond to problems immediately. Because decisions are diffused, you get generally better, more nuanced decisions.

Despite these advantages and the relative amount of writing that has been done towards the goal of employee empowerment, we’ve not moved the needle much in terms of the perspective of employees in general. They still feel just as disenfranchised as before – but now they’re frustrated that more is expected out of them.

Part of the reluctance to behave like empowered individuals is due to a perceived lack of safety in the organization. (See The Fearless Organization for more on psychological safety in an organization.) Part of it is undoubtedly because few people are taught how to harness their courage. (See Find Your Courage for more.) However, a non-trivial degree of resistance is likely because few organizations give their employees the tools that they need to feel as if they’re empowered. It’s hard to feel like you can make important decisions if you can’t get the tools you need to be effective in your job.

It’s an easy win. The client says they’ve just run an employee survey to assess engagement and they got low marks in a few areas. One of them is almost always communication. I can lead with, “So how bad were your communication numbers?” and I get murmurs as the collective room begins to take an intense interest in the carpet. Parkinson’s Law says that work expands to fill the time available. A corollary is that the demand for communication will outstrip the channels and tools available. (See “Effective Internal Communications Channels” for more.)

Start at the Edges