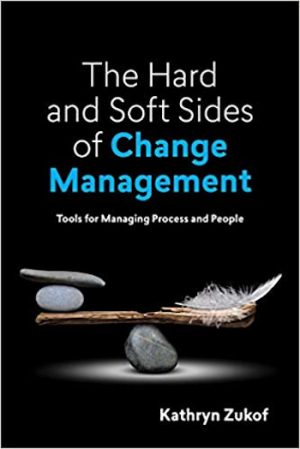 There’s a great struggle between those who want to manage the project of change and those who want to make sure that everyone feels okay with the change. It’s a struggle that’s often obscured by the structure of the organization and the change process. If the project management office leads the change, then the “hard” side of change is often emphasized with tasks, dates, and budgets. If the change management or human resources department leads the change, then it often is focused on employee engagement and feelings, with the project details being an afterthought. Kathryn Zukof’s The Hard and Soft Sides of Change Management: Tools for Managing Process and People shows you how to balance and integrate these two essential aspects of the change management process.

We grieve loss. The Grief Recovery Handbook explains that grief is the natural emotion that follows loss – any kind of loss. William Bridges in Managing Transitions explains that every change will trigger some degree of loss, even if it is a nostalgic loss for the way that things used to be.

Leaders look at the net positive outcome and fail to recognize that in the benefits there are also losses. As I’m looking at giving away our eldest daughter to marriage at some point, I’m poignantly aware that, as much as her getting married is a good thing (we like our future son-in-law), there is a loss. Our daughter will no longer be “our little one” in the same way that she was.

Kurt Lewin first started working with the concept of force fields. (Which I discuss in my blog post, The Behavior Function.) The idea is that every behavior has forces that drive it and those that inhibit it. What I’ve learned from working with those in recovery is that “you’re only as sick as your secrets.” That is because anything you fail to acknowledge gets larger. (See Neurodharma for more on this topic.) When leaders fail to recognize the loss that exists in change, they make that force larger – sometimes larger than the forces compelling the change forward.

In the Christian faith, the most prolific author of the Bible is Paul. However, that wasn’t his given name. His given name was Saul, and he had a conversion experience on his way to Damascus. A persecutor of Christians was converted into a powerful advocate. While we may not have the supernatural power to blind someone to encourage their conversion, there are things we can do to encourage that even our most ardent detractors become our greatest champions. If you prefer an Eastern approach, Sun Tzu in The Art of War said, “Keep your friends close and your enemies closer.”

Zukof recommends a “red team,” or a team that’s designed specifically to look for flaws in a change management plan. It’s a time-honored approach to ensuring that we don’t get too sold on our own ideas. The origins might be found in the idea of a “devil’s advocate” instituted in the Roman Catholic Church to identify flaws in those who were being considered for sainthood.

Red teams are great way to catalog, identify, and mitigate the risks associated with a change. Having detractors on the team validates that they’re heard and that their concerns are being addressed. This, in turn, typically makes them appreciate the change more positively.

I don’t believe in change resistance as such. I think that there are those who are experiencing losses, which we may perceive as resistant. The losses may be objectively real or just the psychological losses like the loss of nostalgia. In acknowledging and recognizing those losses – and attempting to compensate where appropriate – we minimize their effects and reduce the perceived resistance.

The loss may even be just a perceived loss due to a lack of understanding about the change, where communication and dialogue can resolve things such that the individual doesn’t perceive that they will lose as much or their probability of great loss is smaller. The next effect of which is the evaporation of the perceived resistance.

There’s an alternative form of resistance that I’d categorize as conflict. In this case, the person understands but disagrees with the change. They either see things differently (they have a different perspective), or they value things differently. (If you’re looking for tips on resolving conflict, you can sign up for a short email series here.) This form of resistance may result in a form of subversion.

Chris Argyris in Organizational Traps describes a prototypical problem where users would agree in public and quietly go to sympathetic ears to complain. They’d use active and passive forms of subversion to prevent the thing that the members of the meeting publicly agreed or acquiesced to. In its passive form, the members of the meeting would simply fail to do work in the direction of the agreement. It doesn’t feel like rebellion if you simply take no action. The active form, where the person actively works against the public decision or agreement is much less common but is still a real concern for organizations.

Amy Edmondson provided one solution to the problem in The Fearless Organization: helping everyone have the psychological safety necessary to speak up in the meetings about their disagreements instead of quietly taking them on and using them as a reason to block the effort. Immunity to Change recommends the back-end evaluation where you monitor for behaviors that don’t match the stated commitments and ask the question why.

Subversion in any form erodes trust, which is essential for the change, the organization, and society, as Trust: Human Nature and the Reconstitution of Social Order explains.

In A Few Good Men, Jack Nicholson’s character Col. Nathan Jessup exclaims, “You can’t handle the truth.” We seem to think that people can handle the truth much less frequently than they actually can. Kim Scott in Radical Candor addresses the typical objection that the truth can hurt by answering that it’s clear not cruel. We should not confuse secondary benefits with the reason why we’re doing something. When we’re not honest in our communications with employees, they know it, and as a result, they’ll lose faith in our willingness to communicate clearly.

Trust is created in three forms: contractual, communication, and competence. By failing to communicate the real reasons that we’re doing something, we’re violating communication trust, and it will make people appropriately wonder whether they can believe us or not. (See Trust => Vulnerability => Intimacy, Revisited for more on this critical topic.)

I learned that it’s not whether a problem happened or not that determined whether something was good or bad. What really matters more than anything is how people responded when a problem did happen. How did they handle it? Did they take responsibility for it all, like Johnson & Johnson did with the Tylenol tampering issues of 1982? Or did they choose a different path, along the lines of those explained in Mistakes Were Made (But Not By Me)? The difference is critical. It may seem counter intuitive to reward people who made a mistake in your organization or your change; however, if they responded extemporarily, a reward may be appropriate.

The truth is that we’ll all face challenges – some of them we’ll create ourselves. It’s not the mistakes that define us but how we address them. It won’t be a mistake to read The Hard and Soft Sides of Change Management to see how you can handle the challenges that you face in your change better.