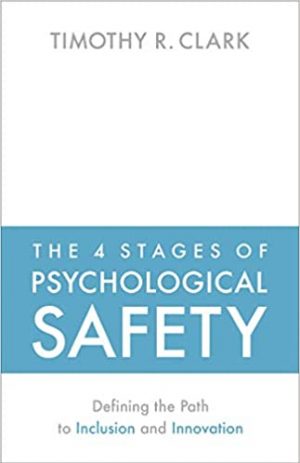 There are no silver bullets – and even if there were, it wouldn’t be very safe to shoot them. The path to developing psychological safety isn’t easy, but Timothy Clark offers some practical steps and advice on how to build psychological safety in The 4 Stages of Psychological Safety: Defining the Path to Inclusion and Innovation.

In my review of Amy Edmonson’s The Fearless Organization, I shared the competing perspectives that we should move towards fearless organizations, but we’ll never reach that goal as long as we have human employees – because they’ll bring their fears with them. Clark provides practical advice about what to do about creating the safety that you desire.

Clark’s stages are centered around increasing respect and permission:

Clark returns to these points throughout the book as he weaves together a set of truths about safety.

Perhaps the greatest misunderstanding people have is that creating a psychologically safe environment means that you never create any disagreement and you never hold people accountable. However, this isn’t an accurate perspective of what psychological safety is. It’s not that you can’t disagree, hold people accountable, or argue. In fact, it’s the opposite. It’s only when you can make it safe that people will be able to express their disagreement respectfully and openly.

In the desire to escape from the childish back-and-forth, where people attack each other at the slightest provocation to protect their fragile egos, we’ve removed all conflict, all disagreement, and, ultimately, all sense that things are real. Because they’re not real we know intuitively that, at some point, things are going to explode, and as a result, we don’t feel safe. In trying to create a safe environment, we’ve unintentionally made it worse by disrespecting the reality of the situation.

Of course, it’s easier to force the disagreement and accountability below the surface. It’s easier to develop a no-tolerance policy for conflict. It’s a harder thing to find a path of respect that leads towards the right kind of accountability instead of random attacks.

Respect for someone operates on many different levels. There’s respect for someone’s rights as a human being – in a sense, allowing them to be who they want to be. (See How to Be an Adult in Relationships for more on allowing.) There is also respect for their capabilities—in a sense, a trust in their competence. (See my post Trust => Vulnerability => Intimacy, Revisited for a place to start on learning about competence trust.) Respect is recognizing both the intrinsic value as a human being and their unique value for being who they are.

A lack of respect shows itself in the form of paternalism – that is, when the employees aren’t respected to understand what’s best for them, leadership must coddle them and make decisions for them. As a parent, I must say that not all paternalism is bad – nor is all paternalism good. Sometimes, they – children or employees – can’t yet understand the situation well enough to make their own decisions. However, the key here is the respect for their growth so that they will be able to make these decisions on their own in the future even if they can’t make them today. The key is to have the mindset that they can grow if they’re given the right conditions. (See Mindset for more on what it’s like to have a growth mindset.)

While a mighty oak tree is more impressive than the sapling – or even the acorn – that doesn’t mean that we don’t respect them. We respect the oak tree has different stages of life, some more vulnerable than others. We recognize that only through nurturing the acorn and the sapling can the oak tree become what it can become. It’s this perspective that we should adopt with other humans under our care. We should think of respecting their ability to make their own decisions while simultaneously creating the best possible conditions for growth.

Nudge spoke about the subtle changes made with university professors that led to them saving more for retirement. These changes still gave the professors the choice but at the same time made the path easier to make the right choice.

The line between paternalism and providing guidance may be in allowing people – including children – the opportunity to have a choice while encouraging desirable behaviors. Employer matching into a 401k retirement plan is one of those balances. The employer knows that the employee needs to save for retirement. The employer offers a benefit of employee contribution matching in part as a way of enticing people to come work for the organization but in part as a way of encouraging the right behaviors. They make it so that employees believe they’re getting more money by funding their retirement – and that’s truth, they are. The decision is still the employees’ to make, the employer just made the deal sweeter.

No one wants to feel excluded. We still carry with us the unconscious awareness that being excluded from a group is threatening to our survival. The more conflict we feel between the group that we’re supposed to be in and ourselves, the less safe we’ll feel. This happens whether we feel accepted by the group yet different or whether we feel as if we should be a part of the group but are rejected or partially rejected by them.

This creates tension when we have an intellectual disagreement – intellectual friction – and the other person or group threatens our membership in the group because of it. I wrote in my review of The Dance of Connection that sometimes we have to make the choice of being right or being in a relationship. Sometimes, it’s difficult to find ways to exit a conversation where you’ve expressed your intellectual disagreement and at the same time do it in a way that preserves the relationship.

Clark encourages us to avoid the trap of not holding people accountable by simultaneously increasing intellectual friction and decreasing social friction. We increase our ability to disagree with someone intellectually and accept them into our group. (See How to Be an Adult in Relationships for more on acceptance.)

In Alone Together, Sherry Turkle shares the frightening truth that, despite all our communications technologies and ways to connect, we feel more alone than we ever have. Our sense of community and relationships have become so diluted that we’re feeling more depression and other mental health issues as a society. We’ve become technologically wealthy but socially poor. The answer to this is, of course, to be more intentional about our relationships and prioritize ways to maintain them. However, that requires a level of emotional capacity that few of us still have.

In a world where emotions aren’t okay at work, we’ve suppressed and repressed them and they’re leaking out. We’ve become so detached from our emotions that we can no longer use them to help us make and maintain new relationships. We’re disconnected from our compassion and frightened by our fear. We’re alienated by our anger – and we don’t even realize it’s happening.

In Switch and The Happiness Hypothesis is a recounting of Jonathan Haidt’s Elephant-Rider-Path model of cognition. It makes it clear that emotions will always win in the long run. At some point, our reason cannot hold back the power of emotions. Instead of trying to hold them back, it would be better for all of us if we learned to have a relationship between our rational minds and our emotional selves. The research is clear that we make our decisions more emotionally than we’d like to admit anyway – perhaps it’s time to accept our emotions and find a way out of poverty.

I Love You, therefore I’m Going to Hold You Accountable

Holding others accountable comes at great personal risk. To hold someone accountable is to be willing to accept the consequences of holding them accountable, and that’s hard to do.

In the end, it’s only through building psychological safety that someone can learn to hold others accountable and accept the consequences knowing that it’s the only path to growth for everyone. It may not be The 4 Stages of Psychological Safety, but then again, maybe it is.