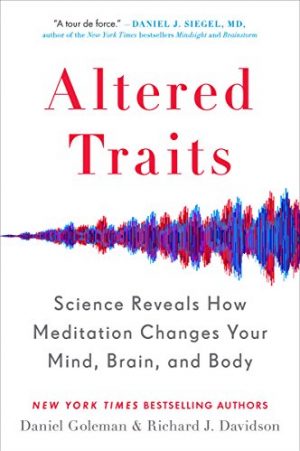 For the most part, popular psychology isn’t exactly positive on your ability to really change your core personality, your default way of being.  Sure, it accepts that you can learn new coping skills and occasionally better ways of responding emotionally, but for the most part, the assumption is that your core personality is set.  This runs in stark contrast to the research about neural plasticity.  Altered Traits: Science Reveals How Meditation Changes Your Mind, Brain, and Body explains – with science – how our perception of things that are unchangeable may be changeable after all.

In mainstream psychology, there are some acceptable conversations.  Carol Dweck explains that a difference in Mindset results in a difference in performance and the way that people respond to setbacks.  Anders Ericsson explains in Peak how the top of many professions got there through purposeful practice and how their brains are different because of their work.  Because this work is founded on traditional psychological and performance principles, there is relatively little push-back.  Even the work of Mihaly Csikszentmihalyi on flow, despite his observations of 5x performance and lasting effects, isn’t all that controversial.  (See Flow, Finding Flow, and The Rise of Superman for more on flow.)  Again, coming from a Western point of view, it’s largely accepted, like the medical machines that make the observations of the brain possible.

However, when it comes to the topic of meditation and mindfulness, there’s skepticism.  That’s particularly true if we rewind the clock 50 years or so and see how these ideas were shunned in the United States.  To be fair, there were charlatans and “snake oil salesmen” who sought to make money with no proof that anything they were selling actually worked and, perhaps in more than a few cases, a dim awareness that it didn’t.  Altered Traits is a walk through the research about how different forms of meditation and mindfulness have demonstrated efficacy in clinical trials and how the effects may be lasting – or even mind-altering.

In the interest of providing a framework for the remainder of the conversation, it’s important that I pause to say that “meditation” is a catch-all word for a variety of contemplative practices.  One of those is mindfulness – that is, the process of observing whatever comes to mind without any reactivity.  They’re observed and let go.  Other forms of contemplative practices are designed to focus on something – including a process like a body scan or breathing.  In those times focus is lost, the distracting thought is acknowledged and let go.

Because there are different forms of meditation, each of them seems to have different results in impacting our neural patterns.  That’s why research into the impact of these practices is often focused on a specific technique, so it’s possible to measure the impacts of that specific process.

That’s complicated somewhat by the fact that the techniques used by meditators varies with experience.  More advanced techniques are used by the meditators with the most experience, making it difficult to compare the results of the more fundamental forms over long periods of time.

Those who had the experience of peace – or the high — that can come from a retreat or focused practice still realize that “after the high goes, you’re still the same schmuck you were before.”  But the research in Altered Traits seems to show that that’s not entirely true.  Much like Heraclitus’ man and river, it can be that the changes are so subtle that they don’t even register – but over time, they can make a big difference.

The After Is the Before for the Next During

The continued cycle of improvement is what the complicated statement “the after is the before for the next during” means.  Said differently, whatever skills, experience, and capabilities you developed during this meditation you bring with you to the next one, making it possible for it to be easier, deeper, or better.  Of course, there’s no straight-line improvement, but repetition makes it easier.

One of the key skills of the advanced meditators is the capacity to settle their minds quickly – on demand.  While average or moderate experience meditators may take a few minutes to settle down, the expert meditators seem to flow into it as quickly an easily as stepping into the next room.  I can’t share this experience with meditation – but I can share it with flow.

Most of my career has been built on the need to get into flow – in different situations.  Sometimes, it’s writing code.  Sometimes, it’s writing books, articles, or blog posts.  Sometimes, it’s presenting in front of thousands of people or facilitating a group of ten leaders.  They’re all different environments where I must get into flow to be effective.  In The Rise of Superman, Steven Kotler brushes the way that various athletes push themselves into flow.  For me, it’s a sort of mental trick normally accompanied by very familiar and very loud music.  Once I’ve dropped into flow, I instinctively turn the music down.  I’ve had to drive myself into flow so frequently that it generally – but not always – comes easily.

It was Aristotle’s word for flourishing, fulfillment, accomplishment, or well-being.  It’s the positive in positive psychology.  (See Positive Psychotherapy: Clinician Manual, The Hope Circuit, or Flourish for more.)  The aims of positive psychology and the spiritual-philosophical roots of meditation are well aligned.  The aim to move beyond human suffering to compassion or loving-kindness.

There are many nudges in the Eastern tradition that the goal of enlightenment or even fruits of meditation shouldn’t be for yourself.  The goal of the practice shouldn’t be because you’ll benefit yourself but rather the benefits should be something positive for humanity.  In other words, not just flourishing for oneself but flourishing for all mankind.

Focus on Others’ Suffering to Forget your Troubles

When you help others – when you care for others – you forget your own troubles and concerns.  Atul Gawande in Being Mortal explains that something as simple as a plant can reduce mortality of those living in senior centers.  Twelve-step groups have known for some time that the best way to get someone through their addiction is to get them serving others quickly.  Like in meditative practices, you’re encouraged to find a coach with more experience than you – in twelve-step terminology, a sponsor.  However, twelve-step groups take it further when they encourage you to take on a mentee.

Aaron T. Beck, whose work on cognitive behavior therapy and depression is the cornerstone of treatments today, is credited with first saying that when you focus on someone else’s suffering, you forget your own troubles.  This is true – but with the caveat that this may not always be the best answer.

Sometimes, people use their focus on others’ problems to look down on them – or to avoid dealing with the issues at the heart of their troubles, and this can ultimately cause more pain and suffering than had they just dealt with their own issues first.  It’s a delicate balance.

The First Person to Benefit from Compassion

Who is the first person to benefit from your compassion?  The answer is you, according to the Dalai Lama.  It’s the opposite of harboring anger for someone else.  In The Road Less Traveled, Scott Peck explains that harboring anger is like taking poison and expecting the other person to die.  Harboring compassion, however, is hoping that others benefit from you taking vitamins.  We develop compassion for others’ benefit and in turn reap some of the rewards.

They Are All One

When Neem Karoli was asked which path (approach to meditation) was best, his answer was “Sub ek!” – Hindi for “They are all one.”  Though various approaches differ and have aspects that are more focused in one direction or another, ultimately, all the roads lead to the same place.  It’s a place where people are better people.  That’s probably the best way to think about Altered Traits – better people.