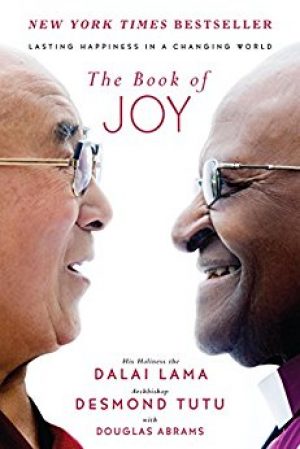 There aren’t many members in the moral leaders club. For that reason alone, when two moral leaders – The Dalai Lama and Archbishop Desmond Tutu – gather to share deep discussions of morality and, in this case, joy, it’s worth investigating. The Book of Joy: Lasting Happiness in a Changing World both chronicles the meeting and walks through the agreements and disagreements of these two great leaders.

I’ve written about my journey to find happiness with many reviews (Stumbling on Happiness, Hardwiring Happiness, Flourish, etc.). I’ve considered the difference between hedonistic happiness and value-based happiness in my reading and reviews of The Time Paradox and The Happiness Hypothesis. Joy is something different.

The Archbishop says, “Joy is much bigger than happiness. While happiness is often seen as being dependent on external circumstances, joy is not.” The Dalai Lama echoes this in the inverse by saying, “Pain is inevitable; suffering is optional.” Joy, then, is a conscious choice to respond to our circumstances in a positive and fulfilling way. We cannot change our circumstances, but we can change how we respond.

The Archbishop comments, “I’m really actually very humbled listening to His Holiness, because I’ve frequently mentioned to people the fact of his serenity and his calm and joyfulness. We would probably have said ‘in spite of’ the adversity, but it seems like he’s saying ‘because of’ the adversity that this has evolved for him.” The Dalai Lama has certainly known pain. It isn’t in spite of the pain that he’s become the great man he is today but rather because of it. It’s because of the way that he’s been able to work through his pain and choose his response that he is revered – even by other leaders – for his serenity, calm, and joyfulness.

The research says that if you “help” hatching sea turtles to get to the ocean, you’ll disrupt their sense of bearing and ultimately kill them. If you “help” a chick to escape the egg shell, you’ll condemn it to death. Even our stem cells need biological stress to cause them to become the specific cells we need. Pain, stress, hardship, challenge, or whatever you call it is the power that drives us to be better.

The challenge, as we learned in The Hope Circuit, is to find meaning in the pain. Without meaning to our pain, we see no sense to it nor control, and we develop the state of learned helplessness – or, rather, we fail to develop a sense of control that enables us to persevere. So, it’s not in spite of hardship that we develop joy but through it.

Ultimately, the feeling of dejection arises when you don’t believe that you can do anything about your situation – that you have no control. This may be the literal truth, but being dejected does nothing to change that fact. In fact, it reduces your capacity to do other things. By accepting that you can’t do anything and moving on, you’re better off.

Dejection is only one form of destructive emotion. Other destructive emotions like envy literally block a person’s ability to feel love, empathy, and compassion, and, as a result, they prevent joy. Destructive Emotions is the subject of a book by Daniel Goleman and The Dalai Lama. It came from a set of meetings between spiritual leaders and scientists. The conversation centered on the Buddhist belief that emotions can be either afflictive or non-afflictive. In other words, they can be either destructive or not.

The problem with destructive emotions is that they block the path to joy. Anger that is maintained for too long becomes afflictive (destructive) and keeps someone from reaching joy. The path to joy, in this case, is through forgiveness or letting go of the anger. Consider a man who was imprisoned for 30 years, who was asked how he could forgive those who jailed him. His response was, “If I’m angry and unforgiving, they will have taken the rest of my life.”

One of the areas that the Archbishop and the Dalai Lama disagree is the degree to which people have control of their emotions. The Archbishop feels like people have little influence on their emotions, and the Dalai Lama feels that we have more. How Emotions Are Made argues that emotions are entirely constructed in our mind – and therefore we should be able to control our emotions. While I think that this goes too far, to say that we have significant influence on our emotions isn’t an understatement.

Paul Ekman has been working with the Dalai Lama since Daniel Goleman introduced him back at the conference that led to the Destructive Emotions book. In fact, Ekman and the Dalai Lama have authored a book titled Emotional Awareness. Ekman is known for his work in developing the facial action coding system (FACS) or, more colloquially, in his ability to train people to detect lies. (See Telling Lies for more.) Ekman believes that, in addition to the ability to shape your emotions, there’s a gap between feeling the emotion and responding, and that this gap can be cultivated. However, he cautions that this isn’t easy, because evolution designed emotions and their responses to happen quickly.

Jinpa (who is the Dalai Lama’s primary English interpreter) mentions that it’s much easier to change perceptions than it is to change your emotions. I find this to be very true. To change perception simply requires examining the perception and others’ perceptions. However, telling someone that they shouldn’t be angry denies and invalidates them. (See Motivational Interviewing for more)

Once perceptions are changed, it’s possible to get folks to re-evaluate their emotions in the context of new information. Sometimes they are so moved that they will adjust their emotion to match the facts – but often not without internal difficulty. I often encounter people saying that they know that they shouldn’t be angry, frustrated, sad, etc., but they still are. The feelings, however, tend to fade with time.

What we may be experiencing is the same sort of tug of war that we saw in The Hope Circuit, where the medial prefrontal cortex (MPFC) is able to dampen the response of the dorsal raphe nucleus (DRN). It takes time (and training) for one part of the brain to attenuate the function of another. The more we research the brain, the more we realize that there are separate, sometimes redundant, pathways. Richard Davidson, for instance, discovered there are four separate brain “circuits” involved in joy. There are one each for maintaining positive states, recovering from negative states, generating focus and anti-mind-wandering, and generosity. It’s amazing that we have four separate circuits that are converged on the ability to help us find joy.

The fact that nature designed so much into the possibility of joy gives us hope that we can each find our own joy – irrespective of our circumstances.

In the end, it’s possible to cultivate joy by cultivating our compassion and focusing our thoughts towards more compassionate directions. Further, we can cultivate joy by forming and maintaining intimate relationships with other humans. The more connected we become to others in a meaningful way, the more joy we find.

To some this may seem like a major transgression; to me, it seems like an awareness that the customs, conventions, and vows are designed to direct us towards the goal of our religion – which both men would describe as love. In context, love most likely equates to the Greek word agape, and thus is essentially the same as compassion. I was impressed, when I read Heroic Leadership, to find that the Jesuits focused on the essentials of their beliefs and bent those traditions that inhibited their ability to become a part of other communities. I see these leaders’ acts as attempts to close the gaps between differing religious views and to unify us all in our acceptance of everyone.

We open ourselves up to joy when we realize that we’re all a part of one large community of humans, and we desire to be in relationships with others. The Book of Joy is written with space for all our names. We just need to seek to be in community with all of our brothers and sisters across the planet Earth.