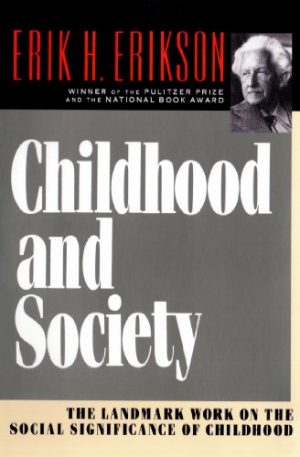 When I started reading Childhood and Society, it was to learn more about Erikson’s stages of psychosocial development. I wanted to learn more about how children develop and the stages that they must go through to become an adult – at least according to Erikson. In addition to more about the stages, I gained a glimpse into his world. Born in 1902 in Germany, he had important thoughts on both Hitler and Russia.

Fundamentally, Erikson believed that humans went through a series of stages in their development and that each of these stages culminated with the resolution of a fundamental conflict. In resolving this conflict, the person was able to move to the next stage. If they moved to the next stage but were unable to resolve the conflict in the prior stage, they’d be continuously pulled back to that stage to face the conflict again and again until they found a resolution to it. The stages are:

The primary value, to me, is that this frames development as a series of fundamental conflicts that we must all find our own resolution to. It structures our evaluation of how to grow and become an adult around resolving these conflicts.

One of the realizations that I reached from Childhood and Society is that Erikson’s studies weren’t just of the western European and American children, as most studies are. His work included two different tribes of Native American Indian tribes. This – and his research into the customs of other cultures – informed his thinking about how children develop. He observed how different customs and approaches influenced the way children went through the stages, but the stages themselves remained relatively unaffected. In this, his work reminds me of Joseph Campbell’s work in The Hero with a Thousand Faces and the recognition that all heroes’ stories follow a similar arc no matter what the culture.

He could also observe how different cultures had different values, how those values become virtues, which are by their nature rigid, and how those virtues can interfere with the ability for a society to adapt – and therefore survive. He called it a paradox, and it mirrors the kind of paradox that organizations face. Organizations by their very nature are resistant to change. This provides the necessary cohesion of the organization, but at the same time, it necessarily rejects the kinds of change that are needed to adapt to the environment.

The cohesion is built around the idea that everyone does things the same way. It’s what Michael Gerber explains in The E-Myth as why organizations can become successful and scale. Richard Hackman in Collaborative Intelligence frames this in terms of the degree to which teams have internal cohesion compared to their willingness to accept the expertise and input of others. He explains that there’s a middle ground that teams must find to be the most effective. They reject some things but remain open enough to accept new input.

One of the ways that Erikson learned about children was through their play. He’d watch them build towers, fences, gates, and cities. From this, he would draw conclusions about their worlds and things they wanted to express but couldn’t quite say. As Stuart Brown explains in his book called Play, play is an important part of becoming an adult. The rehearsal and the practice allows them to try out ways of interacting with others without committing social faux pas.

Erikson noted that boys built towers and girls built gates; and often, the specific ways that they would arrange their space would communicate the dynamics they were dealing with. In play, they had a much higher degree of control than they have in real life.

The Making of Hitler

Erikson turned his focus on Adolph Hitler and, in particular, how his childhood development had left him so scarred that he could order such atrocities. Hitler was a man that many like to analyze. Albert Bandura and Philip Zimbardo have both taken a shot at it in Moral Disengagement and The Lucifer Effect, respectively. However, Erikson makes a point of the abusive father, the submissive mother, and the ways that he suffered in life.

Analogies were drawn with vulnerability and the number of times that Germany had been conquered by foreigners, as being in the middle often led them to be. Germany, Erikson concluded, would therefore develop a collective psyche as a submissive country. The way she was held submissive left her with a transformation that led to Hitler’s rise.

After World War I, Germany’s army size was limited. The response to that was to train an army of specialists. In effect, the army size was smaller, but the knowledge and skills were greater. This led to a more efficient army – with the ability to quickly expand as necessary. This change in the makeup of the army made it susceptible to the desires of Hitler as he rose to power.

Perhaps one of the more striking realizations was that our perspectives are shaped by our profession. By nature of the work, we choose we shape our perspectives. If you’re in law enforcement, you’re likely to support causes that increase and protect law enforcement. If you choose a career in a non-government organization that’s committed to the peace in the world, you’re likely to have a perspective that doesn’t favor increased police strength.

That’s not that surprising. What’s surprising is that your views on other things that are seemingly unrelated shift as well. The constant and continuous reinforcement from your profession can sway your thinking on seemingly unrelated topics. It might shift your feelings about welfare as well. In fact, law enforcement may find that they’re more sympathetic to the soup kitchens and homeless shelters, because they encounter the people who need this kind of help every day.

This means that as you’re talking to folks, you should be curious how they came to believe what they believe. Did they arrive at their opinions and then join their profession, or is it the other way around?