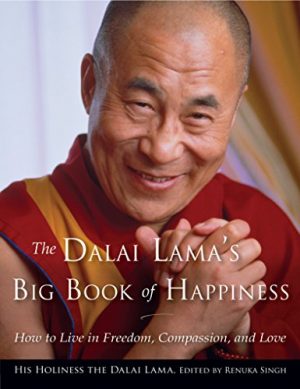 I’ve made it no secret that I am a Christian. I’ve also made it no secret that I’m interested in learning more about other religions and other great thinkers no matter what religion they practice. I picked up The Dalai Lama’s Big Book of Happiness: How to Live in Freedom, Compassion, and Love not because of the great title, but in the hope that it would reveal a bit more about the Dalai Lama and his thinking.

It was April 4, 2016 that I posted my review of My Spiritual Journey, which speaks of the Dalai Lama’s history (and thus journey). This came after my review of Emotional Awareness and mention that I had listened to Destructive Emotions. While My Spiritual Journey left me with a sense that the Dalai Lama was a profoundly peaceful man, it didn’t do much to explain his views on happiness. That’s a good place to start here.

We all want happiness. We all want a sense of everlasting joy – but how can we find it? The Time Paradox speaks about folks who are hedonistic; that is, seeking pleasure for the moment. This is opposed to a values-based happiness, which is based on alignment of actions and values. Daniel Gilbert describes the challenges of estimating our happiness in Stumbling on Happiness. Johnathan Haidt’s The Happiness Hypothesis talks some about how we find happiness, but also helps us to understand our own processing in ways that others haven’t. Rick Hanson’s guidebook Hardwiring Happiness is more focused on teaching skills that can help elevate your thinking to happiness. So it’s no wonder that I appreciated the simplicity and elegance of the Dalai Lama’s thoughts here.

First, many of our troubles are essentially our own creation. That is, the challenges and fears that we have in this world are essentially our own mental creations. (See Why Zebras Don’t Get Ulcers – The Causes and Cures for Stress for more on our ability to create stress where it doesn’t exist.) The implication in this profoundly simple statement is that, if we’re creating our troubles, we should be able to eliminate them, neutralize them, or prevent them from coming into being. In simple terms, this means that by changing our attitude we can change how we feel. We don’t have to change our circumstances – we just need to change our point of view about our circumstances. Instead of moving the goal post and needing a higher and better achievement, we can learn to accept and even relish in our accomplishments. (See Thinking, Fast and Slow for more about how we are continually adjusting our goal posts.)

Second, happiness has very much to do with a calm mind. That is, there is no stress, anxiety, or fear. Happiness is in part the absence of malady. It’s operating without the complication of stress. It’s being present and still in the moment without anxiety. It’s about having appropriate fear about appropriate things.

In the end, happiness is a sense of inner contentment that we have enough and are enough. (See Daring Greatly for more about being enough.)

Happiness doesn’t just come. It doesn’t come in the form of a lottery ticket or a change that happens overnight. There are many lottery winners who find out all too soon that they’re broke and as bad off, if not worse, than they were before. Happiness is the result of cultivating the mind towards happiness.

The Dalai Lama, as a Buddhist, believes that the path to happiness runs through compassion for all living things and certainly all people. In the language of Christians, it’s “global” or “God” love, and it’s the Greek word, agape. It’s connecting with the condition of others and accepting where they are – even if that’s not where we want to leave them. (See How to Be an Adult in Relationships for more on accepting.)

One way to cultivate compassion is to meditate. That is, to focus on prayers or thoughts that lead you to focus more on the sameness between others and ourselves and less on the differences. Instead of zeroing in on the differences of ethnic origin, religion, or social status, we focus on how we are all humans, mammals, passengers on the planet earth, members of the same ecosystem, etc..

Another component of creating happiness is to reduce the gap between appearance and reality. That is, we educate ourselves to greater levels of understanding of the true nature of the universe. We seek the perspective of others to eliminate our blind spots. (See Incognito for more on our blind spots.) By being more aware of or in harmony with the way things really are, we can have less stress and anxiety.

More than in his previous writings, I got a sense for the Dalai Lama’s innate awareness of karma. This is often simplified into “What goes around, comes around.” It’s the belief that, what you do to others, you will yourself experience in some way. If you’re putting out positive energy to others, that’s what you’ll get in return – and vice-versa.

I get the sense that people believe karma will get sent back in the same form and direction that it was sent out. My understanding is that karma comes back differently than you sent it out. Many years ago, I was doing something for a friend. In my mind, it was something quite small. It didn’t take long to do and it wasn’t much of a strain. However, my friend wisely educated me that it’s not the effort for the person doing it, but the effort required of the person who received the gift to do it themselves. The value of the gift is in the eye of the beholder. That simple conversation has remained with me.

I realize that the way that I get back positive karma is never in the form of computer services because I don’t need that. I receive it in other important ways.

The Dalai Lama speaks about the belief in a God – as in Christianity, Judaism, etc. – is good because it reduces self-ego. In much the same way, I believe that the belief in karma creates an atmosphere of kindness. If you know that you’re going to be subject to the results of what you put out in the universe, you’re more likely to seek to generate positive energy into the universe.

Monotheism – belief in a single god, such as in Christianity, Judaism, and Islam – differs from polytheism – belief in multiple gods, such as ancient Roman and Greek cultures had, as well as the Hindu religion has today. So, too, does nihilism –belief in no afterlife, nothing except everyday life – differ from Buddhism, which believes in reincarnation and karma. Certainly, there are differences to be seen in the different religions of the world. However, there are also similarities.

Nearly every religion teaches the importance of love, compassion, forgiveness, tolerance, and self-discipline. No matter what the differences, there are some fundamental truths that exist across beliefs. Spiritual Evolution described the interaction of faith and evolution, and how many of the things that we find in religion are quite useful for us to survive as a species. We should know that, whatever each religion gets right or wrong, there are some common truths.

Compassion – like love – is an action verb. It’s not simply about sitting by and changing our attitude, but how we must push further into our actions. In order to complete compassion, we’ve got to change our behaviors – or start new ones. The many travelers on the road might have had thoughts of compassion for the injured man, but only the good Samaritan took action. (See Luke 10:25-37.) The actions need not be large to be significant. Even a small change makes an impact.

First, our hearts change to accept more of reality, including our similarities to every other human on the planet. Second, our actions change to demonstrate our heart for our fellow humans and our desire to reduce their suffering. This isn’t that different from what Everett Rogers describes in Diffusion of Innovations, where there’s knowledge (awareness), followed by an attitude change, and finally a personal decision is made to change practices.

I don’t expect that just reading The Dalai Lama’s Big Book of Happiness will create the attitude and behavior changes that complete compassion and drive towards happiness – but it’s a good first step.