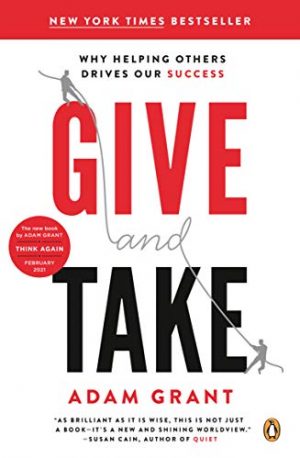 Nice guys finish last – or do they? This is at the heart of Give and Take: Why Helping Others Drives Our Success. If you study people and sort them into categories of the most giving and those that are trying to wring out the very last ounce that life has to offer by extracting it from others, who will come out on top? Does the hard-nosed negotiator win by a nose, or does the giver gallop to the lead?

Grant’s research showed that givers were the biggest losers. When they gave to others, they deprived themselves of productivity, and therefore they lost the race. When they contributed to others’ projects and worlds, they short-changed their own, and that showed up in their results. Game over. Case closed. Just take what you can, and you’ll get further. But wait, not so fast.

What if instead of using the time horizon of a few weeks, months, or years, you began to look at givers across the span of their lives or widened the lens out to account for many years and decades of continuous giving? What then? It turns out that givers come out at the top of the list.

In the short term, being a giver works to your disadvantage; but in the long term, being a giver works to your advantage. Giving is an investment in people, and it pays off – but only after time. Givers may never receive back from someone what they invest in them, but that’s okay. Whether you want to make it mystical and call it karma, or you decide to make it relational and talk about goodwill and positive affect, people begin to do nice things for givers, and those are things that the giver couldn’t do for themselves. They’re invaluable.

For years now, I’ve had the honor of being a part of the knowledge management community. It’s practitioners that have the lofty goal of getting more people to share what they know in ways that allows that knowledge to be helpful to others and therefore the organization. It’s fundamentally designed to create more givers in a corporate world that is more often filled with takers. Grant explains that, though we often act more generously in our personal lives, we tend to operate like takers in the corporate world.

Demand explains the idea of a hassle map. It’s the small things that often seem trivial or insignificant – but create big changes in people’s behavior. Knowledge managers are often focused on removing the barriers or friction to being able to share – either by connecting people to one another or improving findability of explicit (written or recorded) information. By paving the roads between the user’s current behavior and a more giving behavior, they help more people share.

Taking a page from Jonathan Haidt’s work in The Happiness Hypothesis (as was picked up in Switch), knowledge managers make the default answer the right answer. (Nudge also covers this idea.) The easier it is to do something, the more it will be done. The Tipping Point explained an experiment where the goal was to get more students to get a tetanus shot. There were several approaches, but the one that was the most effective was to include a map to where the students could get the shot. It didn’t require sharing gory details of possible outcomes. It required reducing the effort and confusion.

In the end, knowledge managers are trying to push the pendulum a bit more towards the giving side than the taking side.

Kurt Lewin said that behavior is a function of both person and environment. That is, the environment has a great deal of influence on behavior. You may be generous with family and friends and cold hearted in business. The environment (or context) matters. However, the environment is malleable. The way people behave becomes the expected culture of the environment, and that environment then influences future behavior. (See Thinking in Systems for more on how systems loop back on one another.)

In The Evolution of Cooperation, Robert Axelrod shows with game theory that cooperation is adaptive. Programs competed in a version of the prisoner’s dilemma, and those that did best were those that used the tit-for-tat strategy. That is, you did back to the other party what was done to you. A slightly modified version, which occasionally forgave indiscretions by the other party, did even better. The kinds of programs that were competing dramatically impacted the overall success. The more positive and giving the programs were, the more likely it was for better overall success.

Programs can’t learn about reputations easily. The simulations are too direct, and don’t run long enough. However, our lives are much longer, and the number of interactions that we have are much more diverse. We begin to develop a sense of how we expect others to behave – and we can rely on other signals in our network.

In Analyzing the Social Web, we learned about how weak ties are sometimes more useful than strong ties. Weak ties bring you things that aren’t already in your experience. Granovetter published his research that showed that it was weak ties – not strong ones – that led to the most jobs. Our reputation is an expression of even weaker ties – and influence on those weak ties. If they’re so important, then perhaps in the very long term, making investments in reputation are critical.

In the narrowest view, the decision between whether you should be a giver or a taker is largely based on how long-term your view is. If you’ve got a short-term, tactical view of the interaction, then taking is the most advantageous strategy. If you’re looking for the long term, then giving up a bit now and being a giver seems to be the best answer.

In The Deep Water of Affinity Groups, I explain that shared history creates a strong bond that in turn creates a relatively positive impact on reputation. If you knew this person when you were both younger, you’re likely to be more positive about them than you would have been then – or perhaps should be.

Philip Zimbardo in The Time Paradox explains that people have different ways of looking at time. Some people look for the hedonistic immediate gratification while others look forwards or backwards in time – either positively or negatively. (Sidebar: Zimbardo is more famous for his role in the Stanford Prison Experiment, which he recounts in The Lucifer Effect.) It may be that the more inclined you are to look into the future, the more likely you are to take a giving strategy. Similarly, if you look at Clayton Christensen’s question, How Will You Measure Your Life?, you may be more likely to be a giver.

An odd aspect of this is service to others and how givers sometimes overcommit and burn out. (Check out Extinguish Burnout for burnout related resources.) One of the things that Grant noticed was that sometimes the right answer to burnout when you’re serving other people isn’t to serve less – but to serve more. What he saw was that, sometimes, when you add additional service, people became less burned out. We’ve seen this too – but the key point is that the people who added the additional service got clear, unmistakable feedback that their service was valuable. That drove their awareness of their results and made them feel like all their contributions were more valuable.

One of the traps that givers sometimes fall into – which is often easier to escape than burnout – is the idea that they can’t be assertive and protect their boundaries. They believe that to be liked they must always be agreeable even when it doesn’t support their needs as a human. Learning that although people generally like others more if they’re agreeable, they often respect people more when they’re assertive. (See Radical Candor for more about this.)

In truth, neither the giver nor the taker style is right for every situation – and neither is the third style that I’ve not mentioned, the matching style. The right answer for giving and taking is to be adaptable. Being generally a giver but being willing to prevent getting run over may make it easier to get to where you can use both Give and Take.