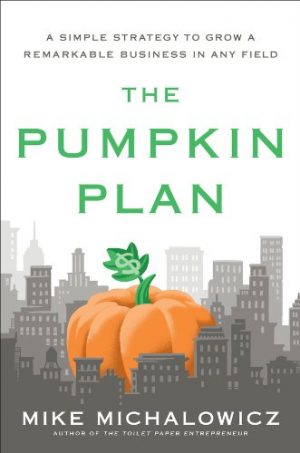 Who wants to know how to grow pumpkins?  The answer is a handful of people, but that’s not really what The Pumpkin Plan is about.  It’s about an approach to your business that follows the pattern of the $500-per-seed great pumpkin growers.  The book was a recommendation from an entrepreneurial friend who thought the fundamental premises were interesting.  I found the process to be problematic.  Normally, I’d not post a review like this one.  I want you to know what books are good and add value to your world.  I avoid criticizing them, because that’s not valuable to you or me – but this is different.

The reason I’m writing this book review is so we can use the book as a case study for the kinds of books that provide formulas and checklists that are your supposed paths to success.  There’s always an “and then the magic happens” step, even though it’s almost never called that.  It’s something that if you knew how to do it, you wouldn’t have been looking for a book to make things better in the first place.

Mike Michalowicz isn’t alone in writing books that claim to have the magic formula.  Don Miller in Building a StoryBrand and Marketing Made Simple has a simple formula for clarifying your message.  Clarifying your message is a good thing – and something I still need to work on.  However, reading Don’s work and even consulting with his certified consultants doesn’t solve the problem.  Of course, there are dozens of other books that can fit in this stack at some level: Duct Tape Marketing, Guerrilla Marketing, The New Rules of Marketing and PR, The Challenger Sale, Fascinate, Launch, Launch!, and Traction to name a few.

What’s special about The Pumpkin Plan is that it takes the simplification to a whole new level.  It’s simple: focus on only those things that are going to give you the biggest pumpkin – and weed out the rest.  Straightforward.  Simple.  But, importantly, it’s impossible.

Our ability to predict the future is awful.  Superforecasting, The Signal and the Noise, and Noise are all great at explaining the challenges.  However, it can be summed up by understanding the difference between a Fermi estimate and the Drake equation.  With a Fermi estimate, you take many known factors and you put them together for a larger prediction that’s generally reasonably accurate.  The Drake equation is designed to determine the number of observable intelligent life in the universe.  The problem with the Drake equation is that we don’t have reasonable answers to the factors and the result is you end up with either an infinite number of detectable intelligent life forms – or zero.  (Sometimes on this planet, I wonder if there’s intelligent life myself.)

So, the core concept in The Pumpkin Plan is – for many of us – difficult to figure out.  Over a decade ago, I wrote the very first version of The SharePoint Shepherd’s Guide.  The very first year, it was a dismal failure.  It didn’t cover my direct costs not to mention my indirect costs.  A year later, it was a phenomenal success.  The difference was an email marketing campaign.  That’s it.  The product didn’t change.  The market didn’t even change that much.  It was one thing that worked that made the whole thing fit together and start to generate a substantial amount of revenue.  Had I assessed the growth potential of The Shepherd’s Guide using Mike’s formula, I would have trashed it and the seven digits of income it has produced to date with almost no effort.

Are there reasons to focus?  Are there reasons to stop doing what isn’t working?  Yes.  However, I can look at dozens of other entrepreneurial books that give equally bad opposite advice.  They tell you that most entrepreneurs would have been successful if they had just stuck with it a bit longer.  They’re using a variation of the benevolent dolphin fallacy.  (See How We Know What Isn’t So.)

The real difficulty isn’t in nurturing the things that are going to bring you success (as you define it) but rather knowing which things to weed out and which to nurture.  The difficulty isn’t in doing – it’s in deciding.  Entrepreneurs are necessarily and perpetually short on data.  They live on hunches and minimize their risks as best they can while waiting on the rest of the information to come in.

Precision agriculture has started to make the data for farming more available.  Equipment, seed companies, and others in the agricultural business are looking to eke out just a bit more from everything – and they’re doing it but slowly.  They think in terms of growing seasons.  They look for what did and didn’t work over the last season and try to adjust make it just a bit better each year.  Complicated forecasting models and precision performance data yield only minor improvements from the land each year – but those compound and are worth it.

Following Mike’s analogy is making decisions on insufficient data to the extreme.  You’re just as likely to prune or weed out the winner as you are the loser.  In fact, when you consider how little of what we do really works, you’re probably more likely to weed it out, because you can’t see its hidden value.  Consider it from another perspective: Richard Hackman explains in Collaborative Intelligence that the best metrics are far-leading metrics that sometimes show negative short-term performance.

How do you know what to nurture when you can’t know what the real winners are?

Mike says, “Don’t waste your time planting seeds that may or may not work out.  Plant the seed that you know has the very best chance of making it, and then focus your attention, money, time and other resources on that tight niche until all of your entrepreneurial dreams come true.”  Great – if you know with a degree of certainty what will work.  His advice is the financial advisor equivalent of picking the one stock that you put all your assets in.  No financial advisor would recommend that.  They’d lose their license.  What do you do that has more financial impact than the company that you’re running?

The answer for most entrepreneurs is that they pour their heart and soul into their companies, and often they neglect their retirement and other investments expecting that they’ll sell their company – “cash out.”  They tell themselves that they’re handling their requirement by building equity in the business.  Their only investment is their business, and Mike’s recommending against diversification.

If you’re good at picking the market, then it could work, but it’s just as likely to lead to bankruptcy and starting over again.  Mike explains that he found markets and sub-markets that weren’t being served.  He went into them and was able to capitalize on the vacuum.  Good for him.  The number of entrepreneurs I’ve talked to will attribute success to just two factors:

I’m not arguing against improving your odds, trying new things, or learning.  I’m advocating an eyes wide open approach that makes sure that you’re not stuck with The Pumpkin Plan.