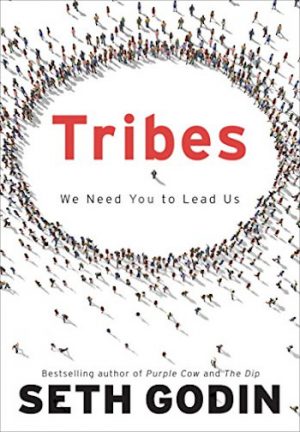 Margaret Mead said, “Never doubt that a small group of thoughtful, committed citizens can change the world; indeed, it’s the only thing that ever has.” That’s the heart of what Seth Godin is talking about with Tribes: We Need You to Lead Us. Tribes are about how you can get people together with a shared interest and allow them to communicate about their passions. What can happen when you get a small (or not so small) group of people together is amazing. Sometimes tribe leaders break some glass, but in general they get things done.

Of all the ways that Godin talks about how leaders are disruptive, I like the word “ruckus” most. It’s about making a statement that seems radical given the status quo, but if the leader is successful, it will seem to be normal. The Earth isn’t flat. The Sun doesn’t orbit the Earth. Lighting will strike the same place twice. We do use more than 10% of our brains. You can’t create gold from lead – sorry Isaac Newton.

The prevailing understanding isn’t always right, even if someone says that it’s scientific fact. We’ve disproven hundreds of strongly-held beliefs. We find ever smaller particles even though we once thought that the atom couldn’t be further decomposed.

This is what makes leading a tribe both fulfilling at a deep level once it’s going and at the same time intensely isolating when you decide to cause a ruckus and challenge the status quo. Until you’ve found your tribe, you’re off on your own.

Leading anything is an uncomfortable proposition. Leading something radical is even more so. A leader isn’t a leader without anyone following, and yet the burning fire in your soul won’t let you quit forging a new path. It’s this passion that attracts others to you like a magnet. They learn about your passion and they want some of that.

However, leadership is filled with hard questions, difficult walks, and a lot of uncomfortable self-reflection about who you are and what you’re trying to accomplish in life. Leaders question their passion. They question themselves. Ultimately, they move forward because it’s what seems like the right thing to do rather than some well-thought-out plan or some grand vision that they’re going to make it. It’s a blind faith that this must be done that drives many leaders. (See Extreme Productivity if you want to see more folks who acknowledge that there are no plans in life or leadership.)

Putting a stake in the ground is the first step. Saying to yourself and others that this is the passion that you’re going to follow is a great start; but then what? The second step is to share your passion – to unleash your fire – with others so that they can feel it too.

Tribes aren’t about stuff – even important, change the world stuff – they’re about connection. They’re about the ability to connect with one another in an important way. The story of a tribe isn’t just one story, it’s the weaving together of a thousand stories.

I remember (but can’t find the reference to) Scott Adams talking about a cartoon that he particularly liked but that didn’t resonate well with the audience. It was about a tiny little IRS man that fit inside the pocket of your shirt. The point was that though Adams, whose insight on what people identify with in corporate America is amazing, liked this one cartoon too much. It too precisely fit his personal tastes and thoughts. His audience, the people that were buying (or enjoying) his cartoons, didn’t see the same enjoyment that he did.

In Adams’ traditional, one-way world, there’s very little opportunity to create a tribe that can tell its own stories into the ethos to fan its own flames. However, today we have dozens of channels and tools that can be used to allow tribe members to feed off of each other and deepen their passion and interest for the tribe in the process.

Willing to Be Wrong

To be the leader of a tribe you must be willing to be wrong. You must be willing to accept failure as an option without accepting you’ll be a failure because of it. Willingness to fail and the conviction to stand when times are tough are that Stockdale paradox that Jim Collins discusses in Good to Great, where you have to have unwavering faith – and a willingness to listen to the market. I’m willing to be wrong, but I think you’ll enjoy Tribes.