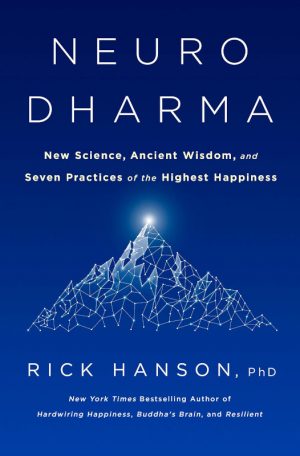 Occasionally, I get the chance to review a book before its release. Such is the case with Rick Hanson’s Neurodharma: New Science, Ancient Wisdom, and Seven Practices of the Highest Happiness. I’ve read some of Rick Hanson’s previous works, including Hardwiring Happiness and Resilient. This book feels a bit different, however. It’s practical but also seems more connected with Hanson’s desire to contribute his unique perspectives.

The subtitle of the book indicates there are seven practices of highest happiness. They are:

Hanson makes the point that his goal is not perfection in any practice. The idea is that the journey you’re on is the reward – not some mythical endpoint you may never reach.

Dharma is truth. It’s not some religious epiphany or mystical art. It’s not specific to Buddhism. Other practices use different words to mean the same thing. Twelve-step programs speak about living life on life’s terms. That is recognizing and accepting the truth of the world – even if we don’t like it.

All of us are bound by the limits of our perception. We necessarily see an incomplete view of other people and the world. The quest for dharma is about broadening that perception as much as possible through study, meditation, others, etc. so that we can more accurately appreciate and respect reality.

Pain is Unavoidable, Suffering is Optional

Whether we want to accept it or not, we will all feel pain. Pain is a signal to us to do something different. Many perceive suffering and pain to be the same, but they are not. Pain is our physiological response. Suffering is our response to it. We can choose to suffer from a breakup or divorce – or we can choose to learn, adapt, and move on.

We can choose to do things that cause us physical pain, because we know that we’ll grow from them. Anyone who has exercised knows that it can be painful, but focusing on the pain only amplifies it. Focusing on the growth makes the pain fade into the background.

There’s an old myth in talent development circles. Edgar Dale’s Cone of Experience has been widely misreported as the ways that people learn and what percentage of people learn those ways. (You can learn more in our whitepaper, “Measuring Learning Effectiveness.”) However, the truth is that we get to choose whether we learn or not. Experience is no guarantee that learning will occur. (For more, see The Adult Learner.) After we participate in an experience, we must integrate that experience into our world so that learning will occur. This can and should be done at a conscious level, though some degree of unconscious processing happens as our brain tries to integrate experiences itself in the form of dreams.

We sometimes believe that we’ve forgotten things – often they’re past hurts. However, the research clearly shows that we don’t forget. The Adverse Childhood Experience (ACE) study shows that long after the adverse events have happened, they play a role in adults’ lives. (See How Children Succeed for more.) Gary Klein’s work showed that we learn and know things that we often don’t realize we know. (See Sources of Power and Seeing What Others Don’t.)

Underneath the conversation about practices and dharma is another conversation. It’s a conversation about how to learn to better deal with your emotions. I don’t mean control them, nor do I mean to say that you ignore them. Instead, the realization is that emotions are based on the environmental stressor as well as our assessment, as Lazarus explains in Emotion and Adaptation. The more we believe that the stressor won’t seriously impact our life or that we have the resources to overcome it, the less frustrated, angry, or despondent we’ll become.

The practices that Hanson recommends helps us to understand the limited impact that any one thing can have on us and develops our awareness of our inner resourcefulness to overcome whatever comes before us.

You’re Only as Sick as Your Secrets

There’s a familiar quip in twelve-step programs. You’re only as sick as your secrets. The more you hide, the sicker you become. You fear and worry that you’ll be found out, and that drives even sicker behavior – which of course needs to be hidden. The best policy is, therefore, not to keep secrets.

I know that some people must keep secrets for their jobs. However, this isn’t the same thing. What is being said both in the groups and in the book is that you shouldn’t have things you share with no one. You should share secrets appropriately. If you’re not letting anyone know about something, then it has the ability to eat you up inside.

Human Being, not Human Doing

Hanson and I are alike in at least one respect. We love doing. I personally have a hard time sitting still and just being. I’m always striving to get something done or be better. I cram things into my schedules, sometimes stacking and other times twisting things into place to make sure I get the maximum out of everything.

Heraclitus said, “No man ever steps in the same river twice, for it’s not the same river, and he’s not the same man.” That’s the reality of self. There is no single self that remains. We’re always changing, adapting, growing, and dying. The idea that we’d find a stable image of ourselves over time is fallacy. We change as the firings in our brain change. We are a self that changes.