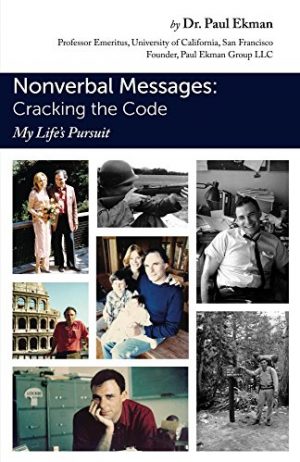 Most of the time, my reviews are roughly linear to my reading. However, this review of Nonverbal Messages: Cracking the Code: My Life’s Pursuit is different. It’s different because it’s an autobiography written by Dr. Paul Ekman, and in it he refers to his other works, including Telling Lies. I reordered them so that this could stand as the summary of Dr. Ekman’s work.

I’ve followed Dr. Ekman’s work for a while due to my fascination with the ability to discover emotions that others were trying to hide. Sometimes, they’re trying to hide the emotions from others, but perhaps more interesting are those emotions that they are attempting to hide from themselves, sometimes with success. As a biography, the book is less focused on concepts and more focused on chronology, so I’ll keep that general flow in this review.

Every child has some trauma in their lives. For Dr. Ekman, it was an unpredictable father and his mother’s mental health, and his inability to prevent her from succumbing to death at the hands of her disease. Today, it might be called bipolar disorder, but when she asked her son, aged 14, to save her the night she took her own life, she created a very powerful marker on the young man. It could be this defining moment that guided his path as he wandered (as we all do) through his adulthood. (See Extreme Productivity for more about how we wander through adulthood.)

The Importance of Non-Verbal Communication

We take it for granted today that non-verbal communication is a large part of how people communicate, and that it’s consistent across cultures so it must be a part of our biology. Coming out of World War II and the Nazi party, anything that even hinted at of legitimacy of the Nazi claim of a “master” or “better” race was resisted. Implying that there was anything to the idea that there was a genetically superior race or that our behaviors were related to biology was taboo. There were numerous barriers inserted into Dr. Ekman’s path as he sought to prove that there are some non-verbal communications that are truly universal.

As a young researcher, Dr. Ekman traveled the world into the remotest of places to verify his belief that some non-verbal communication was truly universal. Strangely, he was led at times by a pedophile (Carleton) who was convicted much later – and after publishing some interesting reports through the National Institutes of Health. A chief of a tribe which practiced cannibalism proclaimed that he would eat Dr. Ekman if he died, which strangely elevated him to the status of an important man.

While all of this is happening, Dr. Ekman is also, apparently, going through the same struggles that many people go through. A few marriages, a few relationships and generally a quest to find himself and the person who fits with him. (See Divorce: Causes and Consequences for more on divorce and its prevalence in society.)

Rules to Live By

Like most of us, Dr. Ekman developed a set of rules to live by – or at least guide posts on his journey. First, he recognized the significance of luck in his life. The stories he tells are reminders that luck is necessary for success. (See The Halo Effect and The Excellence Habit for more on luck.) Luck, however, isn’t the sole actor in this play. Luck, as it turns out, just has the leading role. It’s also necessary to develop skills and talents. (See Peak for more about developing skills.) The final actor in this play is perseverance. For me, this is the most curious of characters. If you’re focused on innovating (see The Innovator’s DNA for more on innovation), then you’ll necessarily make a decision about how long you’re willing to incubate an idea before deciding that it has to have succeeded – or it needs to be killed.

The standard argument is that everyone gives up too quickly on their ideas, that they don’t persevere long enough, but as I mentioned in my review of Grit, it’s a hard line to walk. Certainly, if Dr. Ekman had given up too soon, we wouldn’t have the awareness of how our non-verbal messages betray our true emotions in a reliable way.

In Telling Lies, I explained the mechanisms by which Dr. Ekman indirectly observes emotion. This includes microexpressions as well as changes in emblems and illustrators. This is at the heart of Dr. Ekman’s work, and to me is more interested in exposing the emotions that people are feeling than detecting lies.

In Motivational Interviewing, it’s important to understand the inner state of the person that you’re speaking with. Having the knowledge of Dr. Ekman’s work and an ability to read the multitude of visual cues that are provided can help you be more in tune with the subject, and therefore more able to get better outcomes. (See The Heart and Soul of Change for more about impacts of therapeutic alliance – which the ability to stay connected to one’s emotions assists with.)

I mentioned in my review of Inside Jokes the difference between social and Duchenne (genuine) laughter. It appears through the reference citations in this book that they found their way back to Duchenne through Ekman’s work. So even our understanding of comedy has benefited from the study of microexpressions.

The Door Swings Both Ways

There’s a particular part of the ending sequence in Ghost Busters, where Egon Spengler recognizes that “the door swings both ways.” This is the revelation that the Ghost Busters use to send the ghosts away. I think of this any time people become aware that our biology and our psychology are not a one-way street. The way we feel impacts our thinking, and the way we think impacts our feelings. We often tend to draw a causal line in one direction or the other for things that are correlated. One doesn’t cause the other, as in cause and effect. They co-influence each other such that they tend to happen in parallel.

Dr. Ekman proved that, by making certain muscles contract in ways that mimic the natural muscles for an emotion, the emotion becomes more present in the person. In other words, if you want to change how you feel, you can consciously manage your muscles.

Out of his research, Dr. Ekman developed the Facial Action Coding System (FACS) – a system of identifying the underlying emotion based on the facial expression. He’s taught this system directly and through programs to many organizations and people. His Micro Expressions Intensive Training Tool (METT) is available for anyone to sign up, pay for, and take. It can, with practice, help anyone improve their ability to detect emotions in other people. Other tools, like the Responding Effectively Training Tool (RETT), is designed to teach you strategies for responding once you’ve properly identified an emotion.

I’ve not yet had the ability to do either of these courses but look forward to them as a way to improve my efficacy of understanding others’ emotions.

Nearing the end of his career, Dr. Ekman’s daughter developed an interest in the plight of the Tibetan people and the Dalai Lama. So Dr. Ekman applied to be a scientist at a set of meetings that the Dalai Lama was having – which were being facilitated by Daniel Goleman. (This led to the book Destructive Emotions.) This changed Dr. Ekman and led to further conversations chronicled in Emotional Awareness. In these exchanges, Dr. Ekman found different paths to the same results and someone with whom he could share an intellectual curiosity from a different perspective. This put a different spin on his recent career and retirement.

It led to the Atlas of Emotions project, as well as a renewed vigor for protecting the FACS when Dr. Ekman is no longer with us on this planet.

For me, Nonverbal Messages was an intimate peek into the history that shaped a researcher and scholar that I respect. It reminded me that everyone struggles. That it’s too easy from the outside to see “gold plating grit” (to use Brené Brown’s words from Rising Strong (Part 1 and Part 2)).