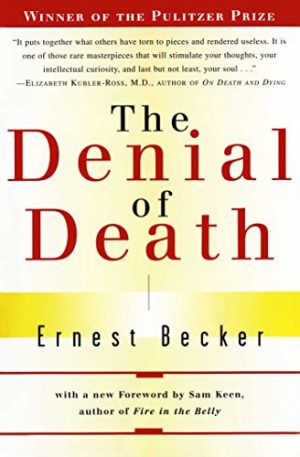 Death has its tentacles around every part of life.  Though we fight to release life from its grip and deny its existence, Ernest Becker explains we don’t have The Denial of Death.  I’ve previously reviewed The Worm at the Core, which extends Becker’s work, and I won’t be revisiting those arguments here.  Rather, I share some of Becker’s insights about how we seek to escape the truth: that we’re all running away from death, consciously or unconsciously.

The most haunting thing in Becker’s work is the realization that some of the tiniest aspects of our world are being subtly manipulated by our insistence that dying is a natural part of life.  The topics that we struggle with most in society are echoes of the death that we’re avoiding.  We struggle with sexual taboos and the hushed words that surround reproduction, because it’s a tacit admission that we’ll not be around forever, and as a result, we need to procreate to keep ourselves alive in some sense.

We build monuments to ourselves not just in our children but in our works as well in the hopes that something of ourselves will survive until antiquity.  Even these writings are an attempt to cheat death and allow ideas to continue after my death.

No matter where we look, we can find evidence that we’re running away from death and what it means.

But then, one may ask, what about those who sacrifice themselves for others?  What about those heroes who lay themselves down on a grenade to protect others?  The answer is that they may be forestalling death for the others.  In The Blank Slate, we learned that altruism could help genes survive when the altruism is directed at relatives.  In Spiritual Evolution, we learned that chimpanzee youth were more likely to survive based on the socialness of the mother.  Connect the dots, and you realize that, in the calculus of survival of the genes, it’s sometimes in your best interest to sacrifice yourself so that others who carry your genes may survive.

We can find immortality if only we can keep our genes alive, or so the story goes.

As was thoroughly addressed in Why Zebras Don’t Get Ulcers, humans are unique in our ability to project ourselves into our minds and possible futures.  For the most part, this has resulted in anxiety and stress over things that have never – and will never – happen.  We’re perfect machines for first predicting and then stressing about these future events that we don’t know will happen.

Another way to deny death is to rely on religion.  If we’re immortal souls who are just inhabiting a body for a time, death loses its sting.  After all death, then is just a transition, not an ending – an ending we all fear.  However, in this conceptualization, it cannot be that the body has control over the man.  Thus, we see references to the carnal nature of man and the need to overcome the acts of the flesh.  This is what of what drives our Victorian-era prohibitions about sex and talking about sex.  (See The Anatomy of Love for more.)  We can’t be immortal beings inhabiting a biological shell if the biological shell has control over us.

For many of us, there are some beliefs that we hold onto but don’t necessarily believe.  Even simple rituals, like knocking on wood or throwing salt, are dismissed as untrue, yet we continue them.  We continue them, because the cost of continuing them is small – and what if we’re wrong?  Rarely does it bother us that we don’t believe in the fairies and trolls that drive these superstitions.  They’re accepted.

Freud looked upon our fears to know ourselves and accept ourselves as we are as the core of psychodynamic theory and the root of psychological illness.  He, however, also believed that it was the suppression of sexuality rather than the suppression of the thought of death that drove people.  Becker (and many others) disagree, instead focusing on the need to suppress the thought of our mortality and death.

No matter how powerful a man or woman becomes in this world, they are powerless to stop death.  They cannot forestall its coming forever despite our modern attempts.  So, in this area of life, we are helpless.  The good news is that this reality rarely intrudes upon the rest of our life in a way that we become hopeless overall.  Hopelessness can lead to depression, burnout, and suicide.  (See Extinguish Burnout for more about the relationship of hopelessness to burnout, When It Is Darkest for the relationship of hopelessness to suicide, and The Psychology of Hope for more on what hope is.)

Leadership is hard to define, but even Becker seemed to endorse the fundamental premises in Rost’s Leadership for the Twenty-First Century and James MacGregor Burns’ Leadership.  That is, leadership is a relationship between the leader and the follower – or collaborator.  He’s further aligned in the understanding that leaders need followers – otherwise they’re not leaders.  What’s interesting, however, is the psychological structure of being a follower rather than a leader.

Becker explains that by allowing someone else to be the leader and blindly following their orders, you take no responsibility for either the activity or the outcomes.  “I was just following orders” is the common refrain.  While this would frustrate Bandura as he speaks about Moral Disengagement and prove Philip Zimbardo’s point in The Lucifer Effect, it does nothing to help the idea that everyone wants autonomy and control of their own lives.  Instead, Becker explains how some decide that it’s not worth the cost.  We see this in Work Redesign, where Ralph doesn’t want any more growth or responsibility.

There is a certain burden to freedom.  If we’re free, then we become responsible for the behaviors and, to some extent, the outcomes, which means we can be disappointed in our own behaviors and the outcomes in a way that isn’t present when we’re just playing follow the leader.

Tranquilize Themselves with the Trivial

Becker also explains that he sees most of humanity tranquilizes themselves with the trivial to avoid considering more important and global matters.  There’s the stereotypical person who works their factory job, drinks a few beers or a case, falls asleep, and does the same thing again the next day.  While Richard Florida points out in The Rise of the Creative Class: Revisited that the way we work is changing, there is little reason to believe that creative people are any different than the hard-working factory worker.

We fill up on news and daily distractions so that we can prevent the considerations of death until we are on its doorstep.  That’s when we begin to hear the Top Five Regrets of the Dying.  We learn that they’re sorry they wasted too much time with the trivial.

Today, we may know more than an any other time in human history.  However, we hold that knowledge to be more temporary and tenuous than ever before.  At first, the opposite appears to be true.  We see people on both sides of a conflict vehemently arguing their positions and assume that they hold their perspective as absolute truth.  However, what we know is that the knowledge you have that is the most secure is the knowledge you defend the least.  Security of knowing something means that you don’t need to defend it and are happy to hear others’ perspectives without fear that something they reveal will cause you to reevaluate your world.

Reevaluating your world, testing, and resetting your core beliefs is a frightening and exhausting process that everyone wants to avoid.  Those who are comfortable in their beliefs are able to listen, because the fear of the reevaluation is gone.

We learn more about our world through space telescopes, subatomic scanning, and large-scale particle colliders.  We learn about each other through genetic sequencing, brain scans, and statistical observation at a massive scale.  These observations have upended some of the widely-held beliefs of our parents and ourselves.  It’s natural that we’d want to defend the few beliefs that have not yet been called into question as a way of anchoring ourselves to our perspective of reality – even if that perspective is wrong.

The one thing that we cannot avoid is that much of what we do in this life is designed to protect us from the reality of death.  There cannot be The Denial of Death.