The Tell-Tale Brain: A Neuroscientist’s Quest for What Makes Us Human 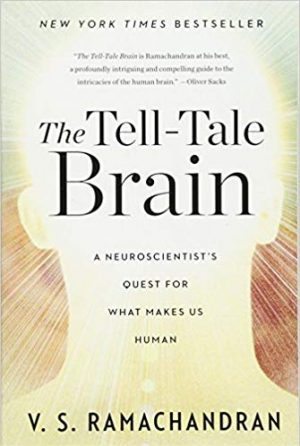 Life is chaos. It’s the million-billion random connections that make life interesting. All art and all science seek to understand us. We try to understand the connections in our own minds that make us, well, us. By understanding ourselves, we will have completed a quest that is as old as humanity and gained access to the keys that unlock productivity and happiness. The Tell-Tale Brain: A Neuroscientist’s Quest for What Makes Us Human is less of a solution and more of a treasure map, leading us to landmarks that help us understand who we are.

It was the early 1800s, before we understood about space travel, computers, internal combustion, or even incandescent lighting. Magnets were strange things, but no one really understood how they worked, until a man by the name of Michael Faraday dropped iron filings onto a sheet of paper over a magnet, and the filings aligned themselves into beautiful arcs. He wasn’t the traditional, well-educated gentleman. He was self-educated man whose work underlies much of what we take for granted today.

His discovery can be simplified to that simple demonstration of a paper, a magnet, and some iron filings. However, the genius in this is that something utterly inexplicable became “knowable” for the first time. Like how organizing the elements into the periodic table increased awareness of the inherent order in chemistry, so, too, did Faraday’s simple experiment explain electromagnetism.

All exploration, whether it’s into space or into the mind, is designed to illuminate the dark corners where we cannot see. In our sight – in our understanding – we can view the world and ourselves differently and can improve. V.S. Ramachandran’s work in The Tell-Tale Brain seeks to illuminate the darkness of how we think.

Francis Crick is quoted as once saying, “God is a hacker, not an engineer.” No matter where your faith lies, one cannot deny the evidence that the things that make us human evolved. Ears came from jaw bones. Our brain itself evolved by starting with basic functions and the ability to find food to its current capacity. These functions were eventually adapted to other purposes.

The more we understand about our physiology and neurology, the more we recognize that we are adapted from earlier animals. Our stress responses trace back to the Serengeti and avoiding lions, even if we’ve adapted how we experience stress. (See Why Zebras Don’t Get Ulcers for more.) We have become successful because of our high-brain power position, which has allowed us to develop the social adaption. (See Flourish for our adaptation and Mindreading for how this works.) That has only worked because we were able to get the number of calories we needed. Our brain today consumes 20-30% of all our energy with only 2-3% of our body mass. The hummingbird developed a hyper metabolism, and we developed hyper intellect.

If you want to see, you obviously need eyes. However, in truth, little of what we consider to be vision happens with our eyes. Our brains progressively build a model based on the information that we have streaming in from our eyes. It’s the model that we see, not literally what our eyes are taking in. The exercise in Incognito proves this concretely. Our eyes contain a blind spot, where the retina attaches to the optic nerve – yet even with only one eye open, we perceive no blind spot. Our brain quietly makes up the missing information to give us the complete picture – whether it’s truth or simply fiction.

Our brain uses many different cues to try to figure out what the eyes are telling it. By carefully shading objects, it’s possible to make them appear to be raised – or lowered. This is the brain considering the heuristics of what an object should look like when it’s a solid color and is then raised or lowered.

Bending Back to Oneself

Mirror neurons allow us to simulate and sense what another person or animal is likely thinking. This socialization mechanism may have allowed us to coordinate better and therefore become the dominant animal on the planet. (The Righteous Mind calls this capacity “shared intentionality.”) However, it may be possible that the increased capacity of mirror neurons may have allowed our consciousness to emerge by bending back on ourselves. Introspection is trying to peer through the veils held by the unconscious to understand what we ourselves are thinking. It’s not too wild an idea that this is possible only through our enhanced mirror neurons. In Leading from the Emerging Future, Otto Scharmer speaks of consciously bending the beam of observation back onto oneself.

The strange twist is found in patients with amputations who have phantom limbs.

Phantom Limbs and Our Skin

What do you do if you’ve got an itch you just can’t scratch? In fact, no one can scratch it. The itch is on a phantom limb. After an amputation, some patients find themselves with pain or sensations in the limb that was amputated. From a purely physical point of view, this can’t be the case; but try telling someone they don’t feel something they do and see how far that gets you.

What if someone placed another arm in your field of view such that your eyes – and brain – could perceive it as yours and someone scratched it? There’s absolutely no reason why this should stop the itch on a phantom limb – but it does. What if you optically shrunk an image that you could believe was your phantom limb? It shouldn’t make the pain smaller – but it does.

Stranger still, take a normal person and anesthetize their brachial plexus, which connects the nerves in the arm to the spinal cord, then rub the arm of an accomplice set up in a way to make the patient believe it’s their own arm. The patient will feel whatever is done to the accomplice’s arm. It’s like the mirror neurons see the action and expect the result. Normally the “vote” from the arm itself would veto the mirror neurons’ perception of what’s happening – but without the input from the arm, the result is the perception of touch when there is none.

In effect, it’s only the fact that our skin transmits a more powerful message than our mirror neurons that we don’t feel what is happening to other people. This might explain why we wince when we see others get harmed.

Take a pidgin – a sort of partial language that’s secondary to two peoples who don’t share a common language. It’s useful only for rudimentary communication. However, if you let children be raised in an environment where there is a pidgin, they will spontaneously start speaking a creole – a language that is a blend of the original language but may conform to its own grammatical rules. In a single generation, the children will learn enough to build a solid underpinning of a fully-fledged language. This is an amazing feat that seems to indicate that our brains are intrinsically wired to work with language.

It’s more than something we’re capable of doing. It seems that our unique adaptations make language particularly easy for us to acquire – and to use with our mirror neurons to coordinate.

How can a caricature of someone look more like them than their original picture? The answer is buried in our processing and surfaces through art. We identify people by the characteristics that differentiate them from the rest of the population. If we exaggerate these features in a caricature, then we make someone look even more like how we imagine them to be than they are in real life.

This is an example of one of Ramachandran’s nine laws of aesthetics, “peak shifting.” The nine laws, Ramachandran believes, drives our interest in art. The complete list is:

Perhaps the most interesting aspect of the list is how each has a rational explanation of how it’s possible that evolution might have created us to be biased towards these factors. It turns out that our tastes and beliefs may not be as much ours as we think.

Metaphysics is dismissed as mumbo-jumbo by traditional scientists. There have been charlatans and fakes who have taken advantage of people looking for answers that Western medicine can’t provide. Eastern medicine has demonstrated its efficacy in some cases – even when there’s no explanation for how it’s working. There’s a spooky quality to some of the metaphysical and Eastern medicine. Metaphysical concepts in particular seem to indicate that we’re all connected.

What’s strange is scientists are beginning to find that we may be. Bohm spoke of our connectedness to one another – and across time – in On Dialogue. But spookier is the world of quarks, where things are literally connected. Quarks and subatomic particles are literally able to connect across space in ways that we don’t understand. Maybe that’s why there are no clear answers in The Tell-Tale Brain – and maybe it’s why you should look for answers there anyway.