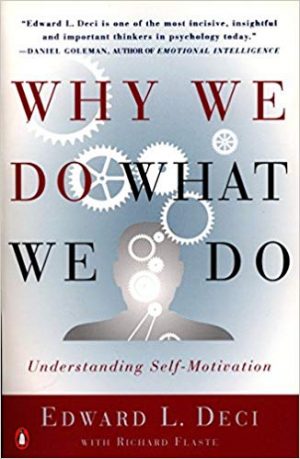 When a book is only available in print form like Why We Do What We Do, it will delay my ability to read it. In my conversion to reading electronically, paper got left behind, such as the case here. However, if you want to get to the root of intrinsic motivation and why people do what they do – and what we can do to encourage more of it – this is the place to start. Edward Deci is at the heart of the research on intrinsic motivation and has been the core of what other works, like Drive, have used to help everyone better understand motivation.

It’s a spooky, weird world when it comes to motivating other people. There are their internal drives. Things like curiosity and the desire for learning seem to come inborn. On the other side, there are the external drivers. The so-called carrot and stick used to reward people for the behaviors we want and punish them for bad behaviors. It seems like it should be easy. Extrinsic motivators can get the behaviors we want, so we should use them, and everything will be fine.

The problem isn’t that extrinsic motivators – like money – don’t cause the behavior; they do. It’s like the trained seal that acts when they’ll be rewarded with a fish. The problem is that, in most cases for humans, we’re trying to build behaviors that last after the motivators are gone. We want our employees to keep working hard after the next sales promotion ends – and that doesn’t seem to happen.

Edward Deci and Richard Ryan (a colleague but not coauthor) discovered that if you used external motivation for a behavior that was previously intrinsically motivated – like playing with puzzles – you’d destroy the intrinsic motivation. Think about that for a moment. The person does the behavior you want – like studying – and you reward them to get more. You remove the external reward and you get less – or none – of the original behavior.

That’s spooky, because it means the very things we’ve been taught to motivate people may be destroying their internal motivation. So, what’s the alternative?

As Drive so aptly summarizes, if you want intrinsic motivation, the best way to get it is to provide individuals with autonomy, the ability to reach mastery, and a sense of purpose. Let’s look at these individually, because they’re so important.

There’s a concern that if you make people more autonomous, you’ll make them more independent and therefore less social. There are several problems with this way of thinking. First, as Brené Brown points out in The Gifts of Imperfection, the most wholehearted people and authentic people she knows are compassionate but have a clear sense of themselves. That is, the more that we understand ourselves, the more we recognize our inherent need to be connected with other human beings. We become more authentic and more real the more autonomous we become.

Autonomy is about being able to make your own decisions – and accept the benefits or consequences. Leaders still have a responsibility for establishing the destination, but it should be up to us to improvise how to get there – at least to some degree.

Our egos are powerful things. They want to believe that we’re each better than we are, and we want to believe that we’ve mastered our chosen areas – that we’re the best. Whether that’s objectively verifiable or just wishful thinking isn’t the point. If we want to motivate people, we’ll give them ways to become masters or, at the very least, allow them to feel competent in what they’re doing.

Those with religious beliefs see an order to the universe. Whether that’s God-ordained or through some other means, the religion offers a model by which people can make order out of their world. Even atheists often believe in fate, that is there is something happening, and things are “meant” to be. We need to find meaning in the world, and, personally, that meaning is our purpose. It’s the role we feel we are meant to fill.

Deci, on several occasions, speaks about the pull or the draw towards an integrated self-image. The desire for coherency of thought – including thoughts about ourselves – is very powerful and sometimes elusive. I’ve spoken about developing an integrated self-image repeatedly, the last time in my review of Braving the Wilderness.

I appreciate Deci’s optimism that there’s a pull drawing people into an integrated self-image, but I’m not completely convinced. I’ve seen too many people with decades of experience at life who still don’t feel integrated in their experience.

Learning how to spark intrinsic motivation and kick start it rather than replace it with external motivation is tricky. It is what Deci calls autonomous support. The tricky aspect of autonomy support is encouraging without feeling manipulative. It’s encouraging the effort and interest without concerns for the outcomes. It’s much like Carol Dweck recommends in Mindset. Encourage people to do the hard work and persist rather than praising their accomplishments.

Some aspects of autonomy support are learning how to ask the right questions, so that people become more intrinsically curious about their chosen passion. (See Motivational Interviewing for more on techniques that may be useful in the conversation.)

As a result, the difficult part of providing autonomy support is monitoring the results you’re getting and the ways the person is reacting to see if they’re experiencing your actions as support – or control. (For more on control, see Compelled to Control.)

Relationships are essential for our survival. Our ability to make our own decisions doesn’t limit or mitigate our responsibility to the rest of humanity. Nor does it remove the positive results we get from healthy relationships. The trick is, of course, in the fact that relationships add the most value when they’re healthy. While healthy doesn’t have a precise definition, there have been many attempts to identify key characteristics. How to Be an Adult in Relationships emphasizes the 5 “As,” where books like Boundaries and Beyond Boundaries are, obviously, more focused on setting boundaries. The net effect of the techniques shared is that we feel safe and supported in our relationships, and we can trust the other person will be there when we need it.

It seems odd but when we have the right supportive relationships, we experience freedom rather than control. Instead of feeling as if the other person is there to manipulate us, we experience the freedom of our own choices in the context of the supporting environment. You feel the freest to try new trapeze tricks when you know there’s a safety net below you. You’re able to be yourself, to be autonomous, when you know there are relationships there that will catch you.

In the end, that’s Why We Do What We Do.