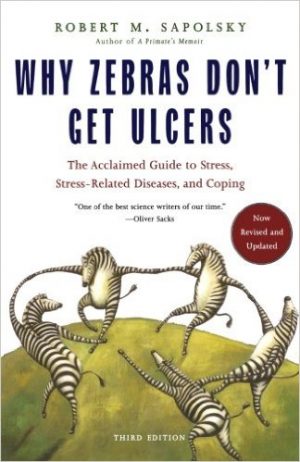 In this three-part review of Sapolsky’s book Why Zebras Don’t Get Ulcers, we walk through the psychological and neurological differences between humans and zebras – at least some of the ones that are important. We started this review with The Physical Impacts of Stress and we’ll finish up with The Causes and Cures for Stress.

There are numerous physiological impacts of stress, but none of them are nearly as interesting as the relationship between stress and the brain. It’s interesting because prolonged stress can kill neurons, and in some cases the neurons that stress destroys are the same ones that are necessary to prevent the additional release of the glucocorticoids that caused some of the problems in the first place.

Salmon are known for their journey back up rivers from the ocean to the place that they were born. They will swim upstream and go to great lengths just to return to spawn. What is less well-known is that, after spawning, their bodies initiate a sort of self-destruct where their endocrine system dumps large amounts of glucocorticoids into their system and very effectively kills off the salmon. Salmon aren’t alone in this approach to preprogrammed die-offs. In other species as well, when it comes to killing an organism fast, nature’s method seems to be to elevate glucocorticoids.

It turns out that the control the brain has to regulate the production of the glucocorticoids – the main actor in the play of stress – is powerful. Sometimes it’s powerful enough to put people in an emotional hole that they can’t get out of.

It’s estimated that by the year 2020, depression will be the second leading cause of disability on Earth. It’s more than just “being blue.” While everyone has times that they don’t feel up to it, depression is marked by the inability to feel happiness or joy. While the loss of a loved one can trigger depression, the sadness that we feel after their loss is not in and of itself depression.

People with depression seem to overgeneralize and amplify negative events. They develop a pessimism about the world – particularly as it relates to their abilities in it. (See The Psychology of Hope.) They develop a learned helplessness. (See Mindset and The Paradox of Choice for more on learned helplessness.) The neurophysiology of depression is real. Not only is there the physiological component of higher than normal glucocorticoids, indicating the stress that the depressed person is feeling – between the person they want to be and how they actually feel. However, what’s more interesting is that their reactivity to antidepressants is different than how folks without depression react. In a normal brain, reactivity to the antidepressants occurs within hours – within the mind of a depressed person it can take weeks.

It’s worth mentioning here that there are no easy answers. Glassier spoke about depression in Choice Theory and described it as “choosing to depress.” Certainly, in my experience there are those that give the appearance of wanting to be depressed. The awareness of the psychological components, like over-generalizing negative events, certainly point to the psychological (and therefore influence-able or controllable) nature of depression but the research showing different chemical reactivity of anti-depressant drugs seems to indicate that it’s a chemical problem beyond the control of most people.

One of the concerns for anyone with depression is the tendency for depression to coexist with the risk for suicide. The good news – if there is any when you’re discussing such painful and debilitating topics – is that the natural tendency to do nothing – psychomotor retardation – tends to reduce the occurrence of suicide attempts in people with depression. Despite this, there are still over 800,000 deaths due to suicide each year, so clearly the effect isn’t large enough. Suffering people still believe the only way out of their pain is to end their own lives.

Of all the useful feelings that we get in our body, pain isn’t likely our favorite. Pain is a warning that you’re damaging (or potentially damaging) your body. It’s a warning signal that something bad is or could happen. It’s an evolutionary tool that motivates us to take steps to protect ourselves. It also happens to be a signal that triggers a stress response.

Pain is, however, a very subjective experience. It’s well-documented that stress can suppress the feeling of pain. Soldiers walk in presenting gunshot wounds with little or no awareness of the problem. Two different people can experience the same event totally differently. How is this, given that the neurology of pain is relatively consistent across humans?

The answer seems to be not that there are radically-varying intensities of pain receptor firing – though there is some of that – but instead, the dramatic difference appears to be the way that the brain processes and responds to pain. Some people at some times can deemphasize the impact of the pain and make it appear smaller.

One of the most powerful drugs known to man is the placebo. Nearly every study controls for its impact, and in most cases its effect size is much larger than that of the actual drug or procedure being tested. (See The Psychology of Hope and The Heart and Soul of Change for more on the placebo effect.) However, the power of the placebo isn’t powerful enough to change brain chemistry.

Are You Down with ACC?

The anterior cingulate cortex (ACC) is the part of the brain that is most responsible for how you feel about pain. It’s not regulating or mediating the actual pain but is instead responsible for the emotions surrounding the pain. Unfortunately, when the ACC is involved, it’s mostly about negative emotions. So ACC activation seems to make people feel worse about the pain. As a result, this is an area that is consistently identified with depression and folks struggling with pain management.

While the ACC and PFC may be centrally concerned with our emotional experience of pain, the hypothalamus is driving the endocrine bus. It’s responsible for triggering the release of glucocorticoids – in a Rube Goldberg, indirect kind of way. The hypothalamus has a closed-circuit circulatory system that allows it to chemically signal the pituitary gland.

These back up the epinephrine and norepinephrine whose release was triggered by the amygdala. These two (along with dopamine) are called catecholamine and have a relatively short lifecycle in the blood stream. They provide the body with an initial burst of power until the body can release corticoids, which can then sustain the stress response for minutes – or even hours.

Have you ever wondered why people like watching scary movies? Who likes being scared? Judging by the popularity of this movie genre, quite a few people. The reason seems to be that they’re wrapped up in the story and that their brains can’t tell the difference between the story that they’re watching and the vulnerability of the actors in the story and themselves. Our brains release the same endocrine wash as if we ourselves were experiencing stress.

Our brains are capable of applying the stress response to both real threats against ourselves and future events that may – or may not – happen. They are, however, seemingly incapable of distinguishing between our real worlds and our fantasy worlds. Perhaps because all of our worlds are at some level a fantasy world. (See Incognito for more.) So whether the threat is real or imagined, today or tomorrow, we can and often do experience stress the same. However, strangely, we don’t look at stress in the past the same way that we look at stress in the current or the future.

Have you ever wondered why a mother would want to go through the pain of pregnancy and childbirth again? Consider the pain and stress for nine months punctuating the pregnancy and childbirth process, and continuing as a lack of sleep through the first few months of life of the child. Certainly there are immense positives of having children – but if you were just to consider the stress of childbirth, one would expect that no one would want to do it again. However, mothers have, since the beginning of humanity, voluntarily decided to be pregnant again. Even if you exclude the time when they may not have fully understood how it worked, we’ve got a long history of voluntarily becoming pregnant again and again.

It turns out that we don’t recall stress with the same veracity that we experience it in the present or project it in the future. Maybe it’s rationalization, and maybe it’s just the realization that you made it through, so it couldn’t have been that bad. Perhaps it’s just the lack of sleep that prevented us from properly converting our memories of the stress into long-term memories.

Most people believe that sleep time is wasted time. The assumption is that you can’t be doing anything productive if you’re sleeping. However, it appears that this isn’t the truth. It seems like sleep is particularly necessary for the formation of long-term memories and for rejuvenating the brain.

Sleep – particularly slow-wave sleep – is an opportunity for the body to prepare the brain for the active work of the next day. It’s when the trash is swept away and the storehouses of glucose are restored. Interrupting sleep has all sorts of bad effects on the body, including increased stress – it seems like the stress response is shut down during sleep. Things like shift work make it difficult for people to get into a sleep rhythm, and therefore to sleep deeply.

There’s another important aspect to sleep that shouldn’t be ignored. That is the process of integrating memories, or converting them from short-term memories to long-term memories. The rapid eye movement (REM) phase of sleep is when the brain sorts through the memories of the day and makes the decision on where (or if) to file them. If you’ve awoken with the experience of some whacky dreams with just hints of the prior day’s activities, you’ve experienced REM sleep and dreaming.

Sometimes these dreams can clue us into our feelings that we didn’t realize we had.

As a society, we’re more anxious than we’ve ever been. Whether it’s a greater instability in the world and in our lives – or just the perception of greater instability – we are living in anxious times. Anxiety is rooted in a diffuse fear – one that has no clear specific cause. In many cases, our anxiety is because we failed to accept and recognize our emotions. (To understand more, look for the Rider-Elephant-Path in The Happiness Hypothesis.)

Repressing our emotions – or more specifically actively continuing to repress our emotions – leads to stress in the same way that trying to project a different self-image requires a great deal of energy. (See How to Be Yourself for more.) The strain of holding back the emotion has the impact of creating a stress response. Sometimes the stress of holding back our emotions bubbles up in the form of an addiction.

As I mentioned in my review of Chasing the Scream, addictions are really the result of some form of hurt bubbling up to the surface in the form of a self-soothing attempt that takes on a life of its own. Instead of learning how to address the pain, we lose ourselves in an addiction.

The research supports this idea. Stress a rat before giving it an opportunity to self-administer drugs and it will become addicted. Don’t stress the rat and it won’t become addicted. That’s not to say that all drug addiction is the result of stress. However, it seems like the stress of these hurts seems to make some folks more susceptible to becoming addicted.

Having worked our way through both the physical and mental components of the impacts and actors in stress, it’s time to turn our focus to the causes and the cures for stress, in the next and final post in the series.