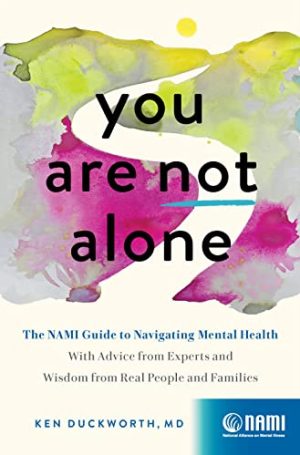 Loneliness is a problem for the social creature called human.  The shame and secrecy of mental illness has created a Gordian knot of spiraling issues and reinforcement, the only solution to which is for us to end the silence about mental health in the same way that we no longer shun those who have cancer.  You Are Not Alone: The NAMI Guide to Navigating Mental Health seeks to bring mental illness out of the shadows and into the light.  The idea is that we cut through the shame and secrecy to begin to work on the real issues facing too many people across the globe.

Before diving into the book, it’s important to set context.  Part of that is explaining what NAMI is.  The acronym expands to National Alliance on Mental Illness.  Started in 1979 and going through many transformations, NAMI is an organization focused on developing mental health through accepting and addressing mental health issues and facilitating wellness.  (These are my words, not theirs.)  It’s important to recognize that mental illness impacts more than the person with the illness – it impacts their families and friends, and NAMI’s wholistic approach provides resources to support the entire system around the person struggling with mental illness.

There’s a difficult spot in mental health.  It’s between those who believe you can eliminate mental illness in a person – they can be cured – and those who believe you can only manage the symptoms of mental illness – and therefore anyone with a mental health diagnosis will retain their struggle until their death.  My personal belief is that the answer is both.  In some cases, the underlying causes for mental illness are biological.  It’s some imbalance or deficit for which there is only maintenance.  In other cases, mental illness may be a lack of sufficient coping skills, and as such, it may be possible to recover.

Let me expand for a moment into the world of physical health and diabetes with an analogy.  There are two basic types.  Type 1 diabetes patients don’t produce insulin – or produce it in insufficient quantities.  Type 2 diabetes patients have production of insulin, but the cells don’t readily absorb it – they have resistance.  For Type 1 diabetes, there is no “cure.”  They’ll supplement their body’s insulin production (if any) for the rest of their life.  For Type 2 diabetes, there are several management strategies.  Diet and exercise are a start, but this is often layered with various pharmacological tools to reduce the resistance cells have.  For many, but not all, patients with diabetes, losing weight will reduce cellular resistance to insulin and may allow them to regain balance without medications.

So, the same disease can have either a management strategy or a recovery strategy.  Ultimately, of course, even those who have recovered must keep their weight off, or else they’re likely to see the return of the disease and its long-term implications.  One of the interesting quotes from You Are Not Alone is that “recovery was perishable like food in the produce section.”  It points to the varying rate at which one needs to reconsider and tend to the factors that led to mental illness – and mental health.  Whether or not there is a final “recovery” for mental illness, everyone deserves appropriate treatment.

When someone struggles with mental health, it’s seen as a weakness.  It’s seen as a problem inherited from parents, either genetically or environmentally.  While we know that the degree to which parents can influence their children is limited, we’re often willing to blame them if their children don’t “turn out well.”  (See No Two Alike and The Nurture Assumption for more on the limits of parental influence both genetically and environmentally.)  Instinctively, we look to blame others for the problems that we encounter in the world.  This serves two purposes.

First, if you blame someone else, then you can quickly and cleanly absolve yourself from blame.  (See Mistakes Were Made (But Not by Me) for more.)  Second, it eliminates the need to confront the probabilistic nature of our world.  That is, there are few certainties, and the uncertainty is disconcerting for us.  (See The Halo Effect for more.)  The real problem is that the probabilistic nature of our world means that our predictions have more error in them than we believe they do.  (See How We Know What Isn’t So for more on our overconfidence.)  Mindreading asserts that our primary reason for consciousness is prediction.  It’s no wonder that our inability to predict what happens next is so uncomfortable for us.

The problem for the recipient of blame around mental illness is that they may need to navigate the waters of acceptance, guilt, and shame.  The first option is for the person who is being blamed to reject the blame.  If they do, there’s no need to accept and process the blame.  However, arguments centered around one person blaming the second person and the second person rejecting that blame are often difficult to navigate.

Presuming acceptance, the next challenge is to decide whether the thing you’re being blamed for means that you did bad – or that you are bad.  It’s the gap between guilt and shame – and for too many people, the hammer comes down on the side of shame.  When it comes to our loved ones, we can’t accept that what we might have done has harmed them.  (See I Thought It Was Just Me (But It Isn’t) for more on guilt and shame.)

Strange things happen when people talk to each other.  Problems seem lighter.  “You’re only as sick as your secrets” is a common refrain from 12-step meetings.  (See Why and How 12-Step Groups Work for more.)  However, the blame and shame around the topic of mental health keeps too many people from speaking openly about their challenges – whether they’re normal or not.

Amy Edmondson in The Fearless Organization suggests that organizations can make safe environments where employees are able to speak about anything.  In my review, I explain why that’s a utopian idea – and a fallacy.  There are certainly things that we can do to make organizations safer, like some of those shared in Nonviolent Communication, but they’re not enough when you’re faced with the stigma that mental health faces today.  Some books, like How to Be an Adult in Relationships, encourage each of us to become healthy in our relationships with others – but that’s hard to do when others aren’t on board.  Henry Cloud and John Townsend in Safe People and Cloud in The Power of the Other make clear the many things that can go wrong in relationships and what we’ve got to do to protect ourselves.

Sometimes, it’s simply skills that are missing.  It could be that we need to learn some emotional intelligence.  (See Emotional Intelligence and Emotional Intelligence 2.0.)  Sometimes it’s an inability to understand the person we’re talking to.  We might categorize them via Reiss’ 16 factors, as explained in Who Am I?, or the Enneagram, as explained in Personality Types, for the purposes of understanding their perspectives better.  We might need skills developed in Reading the Room, so that we can quickly surmise the other person’s perspective.  We might even need to look for a more specific answer when it comes to the mental health of our children.  (See How to Talk So Kids Will Listen and Listen So Kids Will Talk.)

The goal should always be to find ways to better understand the people you are with so it’s easier to communicate.  However, that’s sometimes easier said than done.  Sometimes, it’s hard to even understand what others believe.

Rational, If You Believe What They Believe

In Going to Extremes, Cass Sunstein explains what causes groups to develop progressively more extreme views.  However, it doesn’t take a group to develop extreme views.  Extreme views are disconnected from reality, and sometimes that disconnect can be the mental illness itself.  If you pretend that you’re watching a movie and suspend your disbelief, you may be able to see the world like they do – at least to an extent.  When we watch the latest science fiction or action movie, we accept that what we’re seeing is real.  We don’t question the levitating heroes or everyone’s flawless execution.  Instead, we suspend our disbelief to experience the story – sometimes that’s necessary when coming alongside people with mental illness.

Often, we can find rationality in seemingly irrational behaviors.  We find that, if you believe what they believe, their behaviors and responses make sense.  That doesn’t make them objectively right or that their responses are okay, but it does make it easier to predict their next behavior – making our world just a bit easier.

Nietzsche said, “He who has a Why can endure any How.”  Too many of those with mental health issues don’t have a purpose – or have their purpose stolen from them by their illness.  With no meaning – no why – they succumb to the tragedy of their circumstances.  (See Start with Why for more about finding meaning.)  In Being Mortal, Atul Gawande reviewed the research that shows that even meaning as little as tending for a plant is sufficient to change mortality of the elderly.  They can’t go if they’re here to tend for something or someone else.

As we seek to serve and be served by those who struggle with mental illness, we can’t forget the sense of burdensomeness that they may feel that will lead them to thoughts of suicide.  (See Why People Die by Suicide for more on burdensomeness.)  Similarly, we should consider how serving others pushes back loneliness.  (See Loneliness for more.)  The other side is the sense of burden that care givers can feel and their tendency to experience compassion fatigue or burnout.  (See Is It Compassion Fatigue or Burnout? for more.) Sometimes the solution to caring for mental health is to realize that You Are Not Alone.