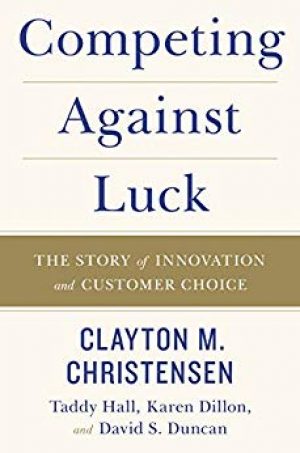 I’ve known for some time now that it’s better to be lucky than smart. The organizations and people that are successful are more frequently the result of luck than intelligence or skill. So, then the key question when you’re looking to compete is the one answered in Clayton Christensen’s title Competing Against Luck: The Story of Innovation and Customer Choice. The unfortunate thing is that there aren’t any easy answers.

Jobs to Be Done

The kernel at the core of Competing Against Luck is the thing Christensen has been working on for a while. Back in The Innovator’s DNA, he spoke about how consumers hire products to do jobs for them – to solve problems that they don’t want to have to solve for themselves, or at least not have to solve them over and over again. One story includes why people buy milkshakes, and the split between two different answers. The first answer is for the morning commute, to have something that will stick with people during their drive and through the morning. The second answer is as a way to say yes to a child to one thing – instead of having to say no to everything.

This example presents a problem, because the morning commuter wants a shake that lasts longer. It’s thicker, so it should be served through a smaller straw, and thus take longer to finish. (See Nudge for simple and unconscious ways to change the outcomes without people noticing.) However, the parent wants the shake they buy their child to be done as soon as possible, so they can move on with the next thing on their task list. The product is the same, but the job that the product is being hired to do is different.

One of the interesting things that happens when this “jobs to be done” theory is applied to innovation is that, frequently, the disruptor – the innovator – in the market enters the playing field at a significant disadvantage. Their products are technically inferior to the historical products – but much cheaper. This allows many people to try them out and allows the disruptor to develop more robust product offerings.

Even Khan Academy, which was started by Sal Khan to help his young cousin, was “cheaper and crappier” than the educational videos already online – but it allowed students to learn at their own pace, and that made the difference. The disruptors are those in the market who can focus on the aspects of the product that are essential and do it at a price that the market can bear.

Hiring for a Different Job

An important point when considering a potential innovation is whether it solves the same problem as the existing players in the market. For instance, Airbnb competes not just with hotels but also with not going on the trip or staying with friends or relatives. Uber competes not just with taxi and limousine services but also with public transportation and asking a friend to give you a lift.

The beauty of innovations is that they can help to redefine a category in ways that broaden the potential market. These changes are natural as the market evolves. Magical numbers happen in the market where utilization takes off. VCRs and DVD players – for instance – both started to take off in popularity when the mean price point for them hit around $200. Suddenly, they became viable alternatives to going out to the movies a few times a year. The same is true for high definition televisions. Once they became “affordable,” they changed how people started to think about where and when to buy them.

Behaviors aren’t explained by needs. There’s a stunning gap between what people say they want and are willing to spend money on and what they will part with money for. There’s a disconnect between the emotional brain that makes the buying decisions and the rational brain that answers survey questions. (See Thinking, Fast and Slow for more.) It seems what people will actually do is shaped by their perception of how OK the solution is – and how powerfully they feel the need.

Everett Rogers discovered that there are many factors for the rate of diffusion (or adoption) of an innovation with Iowa farmers as explained in The Diffusion of Innovations. He found that some people were willing to adopt very early, where others needed more social evidence that the innovation worked. So just having a need isn’t sufficient to cause a change in behavior. It takes a sufficiently large motivation to break the inertia of continuing to do the same thing.

As Nassim Taleb points out in The Black Swan and Antifragile, causality and correlation are different things. Competing Against Luck quotes Nate Silver from The Signal and the Noise in his clarification about correlation and causation. It turns out that neither ice cream sales nor forest fires cause the other. It just so happens that they’re both correlated with warm weather.

Sometimes the key metric, the one that leads to the results, isn’t the one that you’d expect. (See How to Measure Anything for more on leading indicators.) Batting average isn’t – it turns out – the best way to measure offensive success in baseball – on-base percentage is. When looking for innovations, we need to consider whether we’re measuring our results against the right yardstick.

Christensen is effectively advocating for ethnography. He’s saying that someone needs to get to the point that they understand the culture of the target audience so well that they can see the product the people need – that they never even realized they needed. (See The Ethnographic Interview.) Sometimes, you can’t listen to what they’re saying. You must look for ways to experience the situation with them to learn more. (See Creative Confidence for more.)

It’s possible to do market research with the illusion of truth in quantitative numbers. However, to truly understand the nature of the situation, you need the qualitative answers. It’s only through these answers that you can see the struggles that are washed away by statistics and averaging. Qualitative answers give you a palpable feel for the people you’re studying as potential customers. It’s in this feel that you can often find the best insights.

If you stare deeply into the data about innovations, a strange thought starts to emerge. Peace of mind is a necessity in today’s world. It’s not a luxury upgrade. If you think about successful products, whatever they are, they’re likely selling peace of mind. (See The Deep Water of Affinity Groups.) Peace of mind is so hard to come by in today’s world, we often find ourselves seeking it out – and craving the relief it provides.

The armed forces, and particularly the Army, has been known for its command and control attitude. Great plans are created and assumed to be how things need to happen. However, there’s an old army saying that “no plan survives engagement with the enemy.” That’s why orders now come with a specific “commander’s intent” component. That is, in addition to the specific details of the mission, the commander’s goal is clearly articulated, so that the army soldier can find a way to meet the intent, even if the specific plans are thwarted. This commander’s intent is key to soldiers operating in the uncertain world of today.

Much of luck, I believe, is timing. The market must be in the right spot for the right idea. We can try to time the market, outthink it, or outsmart it; but, in the end, it’s luck and, particularly, the right timing that drive a lot of success in business.

While I appreciate Christensen’s title, I’m not sure that there’s much specific to offer in the way of Competing Against Luck – unless you expect that your behaviors are going to bring you better luck. Still, trying to learn how to compete is better than not.