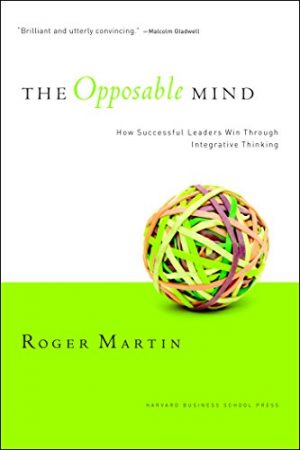 Conflict is a good thing. Conflict between our fingers and our thumb – our opposable thumb – created the ability to create tools and ascend to the most dominant lifeform on the planet. In The Opposable Mind: How Successful Leaders Win Through Integrative Thinking, we learn how it wasn’t just the mechanics of our members but the integrative nature of our intelligence that has really allowed us to remain king of the biological mountain on this planet.

F. Scott Fitzgerald said, “The test of first-rate intelligence is the ability to hold two opposed ideas in mind at the same time and still retain the ability to function.” Genius is in creating situations where we’re able to leverage the power of “and”. It’s not the finger or the thumb in isolation that allows us to pick up things and to create tools – it’s the use of both.

It was 15th century Florence, Italy, when the Medici family assembled some of the greatest minds in one place to work on their own projects. In the process, they managed to create a kind of cross-pollination between experts and disciplines that kicked off the Renaissance period. They created a safe environment where different disciplines could sharpen one another.

Today, it’s easier to assemble great thinkers virtually for an hour or a few hours. It’s easier to hop on a plane and arrive in the same destination for a deep conversation about how my perspective and yours aren’t the same. It is, however, simultaneously harder to find the right people.

Which came first, the chicken or the egg? The egg is the answer because of reptiles, but the real question is which one causes or creates the other. The challenge is to draw the causal arrow from one thing to another. However, integrative thinkers tend to think in terms of systems. (See Thinking in Systems for more about systems.) Instead of seeing a set of discrete, unconnected events, integrative thinkers see everything as connected and causing a network of reactions, some of which feed back and drive the very behavior that started things off while others inhibit the behavior. Instead of following the simple linear logic of A causes B, integrative thinkers think in terms of the influence that A has on B and the influence that B has on A and how they might reach a steady state – or might be completely unstable.

Some systems are dynamically stable. That is, the forces are designed in such a way that they dampen oscillations. Private aircraft are designed this way. It’s what makes it possible for a pilot to control them and for the changes to get smaller over time. Military aircraft are not dynamically stable, and micro-adjustments are made by the flight computer to compensate for the instability and execute the intent of the pilot rather than the commands of the pilot. The computer doesn’t wait for the pilot to respond to a slight pitch right or left if it wasn’t what the pilot was indicating on the controls; it quickly and automatically makes the control surface corrections to keep things in balance. The fact that the computer reacts faster than the instability operates allows it to keep things stable.

Dynamically unstable systems are more performant – thus why they’re used in military aircraft. However, the dynamic instability means that they are more susceptible to faults, failures, and “black swan” events. (See The Black Swan and Antifragile for more.) Integrative thinkers simulate what they see in their head. They automatically create models to look for how systems are going to react – rather than looking for the simple causal arrows. (See Seeing What Others Don’t and Sources of Power for more.)

Not Afraid of the Mess

They accept that their initial models of the systems will be flawed. They accept that there will be forces they don’t see or understand. However, they’ll remain confident that, given enough time and experiments, they’ll be able to find their way to a model – and a map that works.

Map Is Not a Territory

One downfall of the integrative thinker is that they sometimes forget a map is not a territory – that is, their map and model, no matter how good they get, will always be fundamentally limited and remain imperfect. This can lead to poor decisions when you consider them against the actual system as compared to how their model was constructed.

One of the challenges with building a model is that it’s built on the back of our perceptions of reality, and those perceptions are themselves necessarily flawed. Our perceptions aren’t always what they appear to be. We believe we’re perceiving reality, but it’s closer to say that we’re making our reality up from our perceptions. (See Incognito for more.)

Integrative thinkers need to be on guard for where they may be ignoring conflicting signals that may indicate their model is imperfect.

To be an integrative thinker, it should be no surprise that there needs to be a deep understanding of the relationships between the various aspects of the system. Deep understanding is what the whole model-building process is about. However, there’s another aspect that transcends understanding and moves into the category of empathy.

Instead of just intellectually understanding what is happening, integrative thinkers develop an emotional connection to their models and the people who are stuck in the systems they’re modeling. They begin to be compassionate to those whom they see marching along in the system with no way out.

Integrative thinkers aren’t likely to accept tradeoffs. Instead of accepting the standard approach to balance A and B they look for ways to change things to get more of both A and B. Like the Nash Equilibrium they look for ways to create win-win situations where there is no obvious win-win. (See The Science of Trust for more on the Nash Equilibrium.) Their approach might be to reconfigure the pieces they have, remove pieces, or add in pieces that aren’t normally a part of the equation.

For instance, there’s always a tradeoff between the ease of storing information and the ease of retrieving information. However, creative thinkers look for ways to leverage technologies like full text search to make it easier to both store and retrieve information. Why make people enter an invoice number if it’s in the full text of the document and can be searched? Even more powerfully, why not use artificial intelligence to pick up the invoice number and place it into a metadata field for you? Thinking like this doesn’t seek to create balance in a zero-sum game, instead it looks to create a new, larger game.

In the end, the best answer you can get to right now about how to approach problems differently to find better solutions may be to read The Opposable Mind.