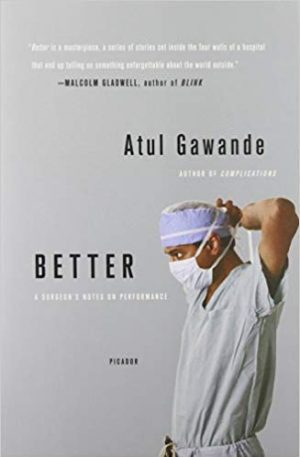 I’m sometimes a hard guy to impress. Sometimes, I strive for excellence and look for ways to get better, and I forget to appreciate that good is good enough. Maybe that is why I appreciated Better: A Surgeon’s Notes on Performance so much. It certainly doesn’t hurt that I’d previously read and reviewed Atul Gawande’s Checklist Manifesto and Being Mortal. However, in the end, I think what I recognize in Gawande is that passion for making things better, because better is possible.

From the dawn of medicine until relatively recently, doctors largely did their patients more harm than good. Techniques like bloodletting weakened patients when they needed their strength the most. Sometimes, even when advances were possible to move medicine forward, they were resisted. Ignac Semmelweis discovered the basis for germ theory in 1847 and the need to wash hands after working on cadavers or before helping mothers deliver their babies. Today, it’s positively obvious, but back then, it was unique and different.

There are numerous accounts for why Semmelweis was so ineffective at convincing his peers that germs existed, and that handwashing was sufficient to stop (or at least hinder) their spread. Most of them involve what are described as “personality defects.” Gawande reports that Semmelweis refused to defend or support his germ theory and instead resorted to personal attacks – which didn’t win him friends. (See Mastering Logical Fallacies for some of the techniques that may have made it difficult to take Semmelweis seriously.)

Over 150 years after Semmelweis’ discovery, we still struggle to wash our hands effectively. Depending upon whose numbers you want to believe, handwashing compliance in acute care settings (mostly hospitals) is somewhere between 20% globally and between 50-80% in the United States. And we’ve tried everything to get those rates up. We’ve put alcohol stations at every door. The WHO has spent countless millions on campaigns like the “The 5 Moments” to teach providers when to wash their hands, and we’ve barely moved the needle. More importantly, we’ve not managed to improve patient outcomes – not one iota.

The consequences are terrifying. We’ve become so reliant on antibiotics that when antibiotic resistant strains of bacteria emerge, we’re caught flat-footed. In 1988, a Vancomycin-resistant enterococci (VRE) strain infested a renal dialysis unit in England, and by 1997, 23 percent of ICU patients were infected. Vancomycin is a go-to drug for infections, and when VRE adapted, we didn’t know what to do. In healthcare, we assume our antibiotics will save us – but when the bacteria adapt, we don’t know what to do. SARS (severe acute respiratory syndrome) was primarily spread through healthcare workers.

We fail to realize that the scary things that we must combat today aren’t fixable by an antibiotic. Take MRSA (Methicillin-resistant Staphylococcus aureus). Methicillin is another go-to drug that a bacterium found a way to resist. What’s scarier is that the newer strains – the ones that haven’t made the news yet – are resistant to not just one of our antibiotics but multiple of our wonder drugs.

When It Doesn’t Work

Medicine has changed war. Medicine has dramatically reduced the death toll in war. It’s reduced the mortality of both mother and child during childbirth. It’s made conditions that would have been fatal into outpatient surgery, yet it’s not enough. “The paradox at the heart of medical care is that it works so well, and yet never well enough,” writes Gawande.

It’s hard to have conversations in a group of people and not have someone tell a story of a loved one who died of a health issue. Too many of these stories involve complications that happened as a part of the medical care itself, whether it was an infection they didn’t have when they came in, a medical error, or just something that wasn’t an expected outcome.

As much as we have made progress, we’ve not been able to deliver the best care consistently.

While it’s nostalgic to think of the doctor who serves a community, accepting livestock and services in trade for the healing he can offer, that’s not the world of today. Healthcare is a business – a big business (as is pointed out by Mistreated). As a business, doctors need to do what is necessary to keep the business going, and that may mean they stop helping people when doing so means you can’t afford to be in business.

The reality is that the skill of a surgeon in the operating suite has almost nothing to do with how much money they’ll make. Their ability to make a business run will drive their revenue and their professional survival as a doctor.

It’s a double bind. On the one hand, we know there’s not enough application of the best practices that have been demonstrated through research. On the other hand, there’s no way to innovate if we don’t break some of the rules – in a controlled way – to see if we can make things better. This is the central concern at the heart of making medicine better.

On the one hand, we want doctors who read the latest journals and follow all the latest advice. On the other hand, we’ve seen research be reversed as new information is gained – and that information is only gained when we stray from the rules.

Clearly, the difference is that, in the one case, doctors fall upon the norms of their groups and just do what they’ve always been doing, even when there is research saying it’s ineffective or there are better approaches. It’s just too hard to override your experience. You’ve done sometimes hundreds of these procedures with only a few complications. Why should you have to learn something new? How many injuries would it really save? We don’t believe the research; we believe our personal experience.

So, we have to encourage consistency and simultaneously find ways to carefully try new ideas to see if we can get even better.

The Ego and the Average

At the end of the day, being better is about elevating yourself above the average. The only way to know if you’re making progress is to measure your performance, and that comes with a great risk. You may discover, much to your dismay, that you are only average, despite your striving and struggle. Despite the trials and the conquests, your performance is only average. While this may be, on the surface, bad news, it does at least let you know where you are. If you want to become better – as a surgeon or just in life – perhaps you should read Better.