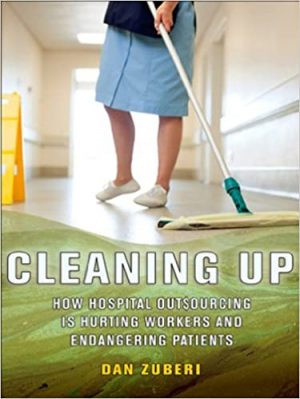 One of the challenging ethical dilemmas that faces physicians is when parents of a child tell them to do whatever they can to keep their child alive. The problem is that, no matter how painful it is, there are some situations where death is the right answer. It’s not an easy call, and no one involved likes the answer, but sometimes there are no real chances for a meaningful recovery. The dilemma for the physician is how much to do and when is the time to compassionately tell the parents it’s time to end the suffering – even if there are technically more things that can be done.

One thing that shouldn’t require this degree of struggle is having a clean – and disinfected – hospital room for the care of patients. However, the research is clear that most rooms aren’t cleaned well. Things are missed and patients are getting sick because of it. Dan Zuberi believes that at least part of the problem is the outsourcing of environmental services workers. In Cleaning Up: How Hospital Outsourcing Is Hurting Workers and Endangering Patients, he lays out the case that something must be done to improve patient safety.

To understand what’s at stake, it’s important to realize that healthcare-associated infections (HAIs) account for additional suffering for around 2 million Americans each year. Of those, roughly 100,000 will die. HAIs are infections that you didn’t have when you arrived at the hospital but that you acquired during your stay. While some progress has been made on reducing HAI rates, they remain strikingly high.

Based on many factors, including the region you’re in, the socioeconomic factors of patients, and the kinds of care that a hospital provides, there’s an expected rate of HAIs. These expected rates are baked into the way that the Centers for Medicare and Medicaid Services (CMS) pays hospitals. Hospitals are not reimbursed for the care that they provide related to an HAI. Additionally, when a hospital’s rates are poor compared to others in the industry, they face penalties that can be millions or even tens of millions of dollars. A single infection can cost a hospital over $100,000 dollars but may be as low as approximately $13,000. Collectively, the costs of the infections and the penalties are staggering.

Despite this, the expected rate is generally around 0.12 percent per patient per day. So, it is expected that for every 1,000 patient-days in the hospital, there will be 1.2 infections. This doesn’t sound all that substantial until you realize that an expected rate like this creates a greater than 50% chance that someone will have contracted an HAI in your room in the preceding year.

The cost in human suffering and finances to the healthcare system are substantial, and they should be unacceptable. If the airline industry had a similar failure rate, no one would fly or there would be a monumental outcry. However, because HAIs are hidden and distributed across the world, there is no uproar.

Most of the focus on environmental cleaning surrounds the so-called “terminal” clean. This is supposed to be a complete cleaning and disinfection of the room, and it’s supposed to happen between patients. The problem is that the research shows less than 50% of the high-risk objects (HROs) are cleaned in an average terminal clean. HROs might also be called “high-touch” objects, because they’re the things that are touched all the time. They’re bedrails, light switches, doorknobs, tables, and so on. The result of this poor cleaning is there’s a 40% higher chance of catching an HAI based on the person who had the room before you having that particular infection.

Zuberi pins the problem of poor cleaning on the movement to outsourcing environmental services, though my own research indicates that this is at best an aggravating factor rather than a smoking gun.

Outsourcing the Source of Evil

Outsourcing is done to reduce costs. The general idea is that another organization can run a function better than you can run it in house. You pay them for a service, and they can deliver it at a lower cost. It’s a standard approach across all industries. Relatively universally, it has challenges.

The winning bidder is often unprepared to deliver the service at the level of delivery that the organization is used to getting. Whether we’re talking about help desks or facilities maintenance, often the “savings” are due to a lower quality of service. Even when they want to maintain quality standards, they’re forced to pay less and offer fewer benefits to extract the profitability necessary to pay for the management and sales overhead. The push to lower pay results in higher turnover and therefore increased training costs.

Management at the outsourced contract provider are constantly trying to manage their cost profile to ensure that they remain profitable while sometimes making decisions that hurt them in the long term.

The key to effective outsourcing is to align the incentives for everyone such that the situation is a win/win or lose/lose rather than win/lose or lose/win. When metrics aren’t designed well, situations arise where what is in one party’s best interest is not in the best interest of the other party. Such is the case with most environmental services contracts.

Even when metrics are aligned correctly, the necessary work to collect and verify the metrics isn’t done – because that adds additional costs to the system. As a case in point, there are sometimes – but not always – performance guarantees. However, these require audits of performance, which, because they’re awkward and difficult, are rarely done.

More perversely, rarely are environmental services organizations held accountable for any degree of increased HAIs – even when it’s possible to nearly directly associate those infections with poor cleaning practices. As a result, organizations are incented to reduce the cost of cleaning by reducing time, labor costs, supplies, or any other means necessary – irrespective of whether those decisions negatively impact the patients or the hospital system with whom they’re contracted.

The result of wage pressures means that the workers are working – sometimes two or three jobs – for such little money that they can barely make ends meet or are slowing falling into an economic pit that they can’t recover from. This is while they’re facing challenges that put them at risk every day. They carry high degrees of stress that compromise their immune system’s capacity to combat the pathogens they encounter daily. (See Why Zebras Don’t Get Ulcers for more on the impact of stress to the immune system.)

In the struggle to make ends meet, they’ll change jobs for a small increase in pay, because the risk of changing jobs is smaller than the impact the pay increase can mean to their family. Zuberi contends that the wage of workers was nearly cut in half when environmental services were outsourced. This pressure means there’s a scramble to recover the wages they once had. The resulting turnover increases the non-compensation costs of the organization, applying more pressure to the managers to cut costs.

Non-compensation costs include the cost of recruiting, hiring, training, and managing payroll for the organization. Consider the initial recruiting, setup, and training costs for an employee might be $4,000. When wages for the employee are in the $12/hour range, the training and setup costs are roughly 20% of the first-year wages. When turnover is greater than 50% per year, this creates more than 10% of the total cost of the employees. Additionally, the constant turnover creates chronic shortages, further reducing the quality of the cleaning.

For us, Terri and I, we want to reduce HAIs. That’s why we pursued the patent on the moisture indicating IV dressing. It’s also why we’re making a substantial investment into the development of an augmented reality environmental services training program (AREST). We want to teach environmental services workers how to clean in a way that works for them, is effective, and isn’t expensive. In a sense, we’re trying to do our part to start the process of Cleaning Up the challenges with environmental services. Maybe you can do your part: start by reading Cleaning Up.