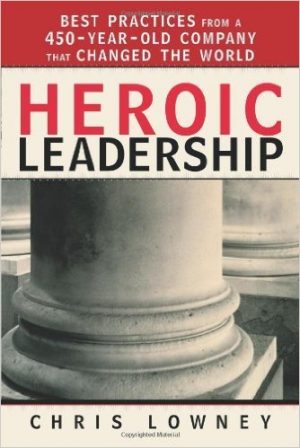 Sometimes you stumble over a book in a way that makes you believe that there’s some outside force – God or the higher power or whatever – and you decide you need to read it. Heroic Leadership: Best Practices from a 450-Year-Old Company That Changed the World is one of those for me. On my way out to SPTechCon last week I sat next to a lady who I noticed had a leadership paper she was working on. She wasn’t reading a book on leadership, she was editing a paper on leadership. I can’t remember this every happening in all of my years of traveling. Through our conversations I learned that she was a minister’s wife in Iowa attending a seminary in Chicago. When we discussed leadership she said that the book Heroic Leadership had really influenced her thoughts on leadership – particularly that she realized that everyone leads. A book that can create a feeling of leadership inside a person is a book worth reading – so I downloaded it and started reading.

While Who Moved My Cheese? is an easy read, Heroic Leadership is a bit more deep. Chris Lowney was a Jesuit Seminarian who left to work for JP Morgan and the book is his reflections on the Jesuit company – the Society of Jesus. His perspective is historical, providing references through time of how the Jesuits had shown leadership. However, that’s not a good place to start – the good place to start is “who are the Jesuits in the first place?” I had a vague idea but didn’t realize that they were an outgrowth of the catholic church. Certainly they trace their roots back to 1540, so they’re a 450 year old company although company had a slightly different meaning. As Lowney is fond of pointing out in the book, the company wasn’t much like any company that we’d recognize today.

Fundamentally Lowney believes that the Jesuit leadership is based on four key values:

The focus on self is relatively unique. Many leadership books focus on how to work with other people. Some books like The Seven Habits of Highly Effective People speak about principle driven leadership, however, most books are more concerned with the techniques of leadership than the principles. Strangely the Jesuits do have their own form of “how to” book. It’s The Spiritual Exercises of St. Ignatius of Loyola, the founder of the Jesuit company. However, as the title suggests, it’s not a book about with “how to” for other people, it’s a “how to” book for yourself. It’s a guide to the process of discovering yourself and your values. It’s an inside-out approach to leadership.

While Lowney never directly uses the words Servant Leadership, the thought kept resonating with me as the list of accomplishments of the Jesuits – and their approach to the accomplishments were read. Servant Leadership puts the leader below the folks they are leading – supporting them in their growth. This is certainly consistent with the values of the Jesuits. In China they became involved with the creation of the Chinese calendar bureau and by supporting the creation of accurate calendars they were helping to lead the Chinese people in acceptance of their Christian ideas. They created the finest schools in Europe for their time (and for free) in order to help others become more educated (and provide a basis for potential members.) Their attitude was one of leadership through support and doing.

A key component that Lowney discusses several times throughout the book is the contemplative or reflective nature of the Jesuits. The spiritual exercises anchored them into a routine where they reflected on their condition and themselves. This was a sort of continual fine-tuning which allowed them to both shape their world view and refine their understanding of themselves and their weaknesses. Very few people have a thoughtful, intentional time to reevaluate their world and themselves personally.

One curious bit is the question of who is a leader? As I mentioned above my seat-mate heard that everyone leads through this book – and that’s true whether they do it well or poorly may be up for debate but the fact that they are leading isn’t. We lead when we help a friend through a personal problem – we lead them through the problem. We lead when we discourage or stop bad behaviors of our peers. We lead in lots of ways.

The Jesuits, in Lowney’s opinion, were generally good at knowing which things were changeable. That is they knew that some things, like the way they dressed, were not a reflection on their core beliefs and were instead cultural norms. They differentiated between their religious faith and principles from those things that which are simply norms. This clarity between what must remain the same because they are unalterable expressions of their value system and which things were just the way things have been done before – and therefore are of little consequence if they change is very powerful. I was reflecting on the way that I add value to my clients and how the ability to pinpoint key problems is essential. Knowing which things can be changed and which cannot allows everyone to keep productive.

I was also struck by the innovation in the Jesuits finding solutions that no one had figured out before. Lowney describes this as living outside the box and certainly I’d love to figure out how to get everyone to redraw the boundaries of the boxes. For me I see people artificially draw small borders for their boxes. Not knowing what is and isn’t movable causes them to unnecessarily confine themselves to a place where fewer things are possible. From my perspective, the Jesuits throughout history were able to define their boxes – their limits – with enviable accuracy. They knew how far they could go and no further. This sort of reminds me of farmers. Most folks who’ve never been on a farm think of the experience as quaint or backwards – or both. However, I find ingenuity on the farm. I find new uses for existing materials and solutions built upon the foundation of what was at hand. Farmers knew what the materials around them would – and would not do – and used everything at their disposal to fix the windmill, create a tool, or find a solution to a problem.

The final point I want to make about Heroic Leadership is the word magis. That word (concept) means something more or something greater. The quest to continue the journey to find that better that is yet to come. It’s the core drive that caused the Jesuits to span across the globe to chart the uncharted and to do what had not been done. It’s that single word that fueled the drive. So my question for you is, do you have that drive for magis?