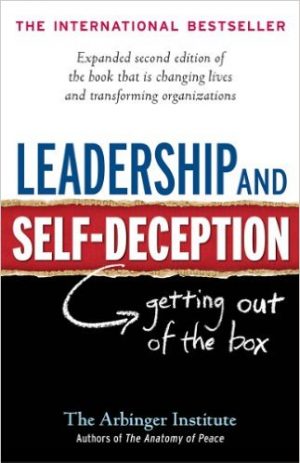 Self-Esteem is something we’re pushing into our children. Dr. Spock’s guidance to parents in the 1950s led parents to work on a child’s self-esteem to the exclusion of proper discipline. Here’s what Mihaly Csikszentmihalyi says in Finding Flow:

“Dr. Benjamin Spock, whose advice about child rearing was so immensely influential among at least two generations of parents, in the twilight of his life doubts that the stress placed earlier on training children to be unfettered individualists was such a good idea. He now feels that it is at least as essential for them to learn to work for a common good, and to appreciate religion, art, and the other ineffable aspects of life.”

However, as a society we’re often focused on self-esteem – mostly ours – but self-esteem none the less. The book Leadership and Self-Deception is written in the form of a story but is designed to teach an important lesson about our feelings, our perception of reality, and how others may not be the only ones who are wrong.

Let me seek to summarize quickly. We betray ourselves – we all do it. It’s as simple as having a thought and failing to follow up on it. The book makes a point of explaining that we can’t do everything that we might like or might be possible for every person – but rather we should seek to betray ourselves less. The problem isn’t self-betrayal itself as much as it puts you “in the box.” Inside the box you seek to justify your own self-betrayal. In order to justify your own self-betrayal you must vilify the other party and take upon yourself the position of the victim. Victims have a sense of helplessness which reduces the ability to break free.

Once we’re “in the box” we’ll distort reality and lash out and invite others to be hurt and enter their own box and thereby we collude with each other to keep ourselves in the box – and away from being open and honest with each other.

The problem is that we have delusional self-images. The book Switch pointed out “A full 25 percent of people believe they’re in the top 1 percent in their ability to get along with others.” Clearly 24% of people are wrong about the way that they see themselves – but which 24% remains a question.

So self-betrayal leads to being “in the box.” The act of being in the box leads to seeing others as the only ones having the problem. That isn’t to say that others don’t have problems – but we do too.

One important point is that when we’re in the box the pull to defend our position, to cover our self-betrayal is like the event horizon of a black hole – it’s an almost inescapable proposition. Certainly we’re not going to wiggle our way out by trying a technique or skill to manipulate the other person or to suppress our self-betrayal. We can’t cover up the self-betrayal – it will leak through and will be seen by others. Instead, we have to gain power through acknowledging and — in so much as it can be done – addressing the self-betrayal.

The solution to getting out of the box is to be open and honest with one another, to acknowledge that no matter what the flaws in the other person we have our own role in the drama that’s unfolding between us.

Leadership and Self-Deception is an easy read, is deceptively simple and deliciously subtle. It’s worth picking it up and reading it. I’ll close with two direct pulls from the book, a summary of Self-Betrayal and What Doesn’t Work “in the box”

What Doesn’t Work “in the box”