Leadership for the Twenty-First Century 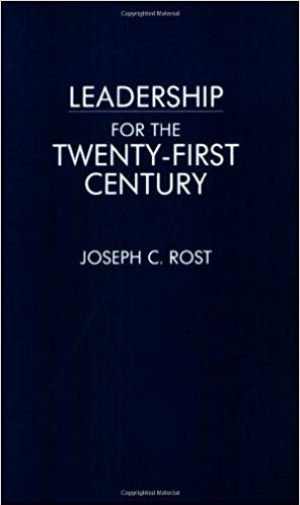 Leadership is a tricky word to define. That’s why, in Leadership for the Twenty-First Century, Joseph Rost takes more than two-thirds of the book to try to define it – and probably still doesn’t get it quite right. You might expect that I wouldn’t be a fan of a book that spends so much time on something that most would agree should be relegated to a foreword or, at the very most, an introductory chapter. However, the story is more complicated than that. There’s a lot of wisdom in looking back and realizing how poorly we’ve defined the term and the issues that this has caused.

Rost walks through decades of different perspectives on what leadership is and wades back in the waters of time to try to find the root of what leadership is. He believes that you can only work on improving something once you know what it is. As it comes to leadership, few people have stopped to ponder what it really is. Most have some vague sense that leadership is management.

When you have managers enter a room for a leadership meeting, it’s just another day in the office, and, at the same time, it comingles the terms “management” and “leadership.” If your managers are the ones doing the leading, then how are the terms different? Unfortunately, when used in this way, they’re likely not different. Leadership loses its special meaning when it’s just a synonym of management. Management, too, loses its distinct meaning when anything considered leadership can be lumped in. It’s not that one is more necessary or better than the other – just that they’re different.

Some would argue that leadership is successful management, but that lays down the gauntlet as to what successful management is. Considering that the same managers for Digital Equipment Corporation (DEC) and Lego were called successful during one period of the company and unsuccessful during the next using the same strategies, were they leading all along or not? The answer is perhaps that we’re looking at the wrong measures. Richard Hackman in Collaborative Intelligence suggests that you can’t look purely at output measures. You must consider how the team is working together to know whether they’re effective or not. Perhaps leadership has the same qualities, which transcend short-term output and lead to longer-term goals. At the same time, without clear criteria, leadership takes on mythical properties.

Great leadership is the stuff of legends. People able to lead were like the knights of the round table, slaying dragons and saving the land. We lifted good leaders on pedestals and gave them massive salaries commensurate with the value we felt they could bring to organizations. This myth-making created CEOs whose income is orders of magnitude above those who worked below them.

Whether or not a CEO deserved the salary and bonuses they received isn’t the point. We saw the CEO as the chief leader and therefore worthy of enormous compensation packages. No one bothered to question whether the CEO was just lucky in their last role or whether they really had something special. No one bothered to pay attention to whether anyone was following them or not. We idealized the leader into something that couldn’t possibly be true, and no one was willing to speak out about “the emperor’s new clothes.”

The problem is that no one wants to admit that the CEO isn’t a mythical leader who always wins the day. We live in a probabilistic world. (See The Halo Effect.) Because of that, we must realize that a CEO may – or may not – be able to lead an organization through the current times. Some CEOs will have a better probability of success, but there are no guarantees.

Because there’s no way to know what the forces are and whether the CEO’s skills will be enough to overcome the barriers placed in their way – and there’s no way to know how luck is going to fall – we must take a risk and guess at success, and we don’t like to do that. It’s easier to believe in a myth than it is to accept the difficult reality that leadership – even good leadership – isn’t always successful.

Rost’s essential point is that leadership isn’t and cannot be expressed in a single person. Rost’s point is that leadership is the name for the relationship between a leader and a follower. You can’t extract a leader and transplant them to someplace else and expect that they’ll immediately be followed. There are behaviors and things that can be done for a leader to encourage followers – but the followers still get to choose whether they want to or not.

By refocusing the conversation about leadership to one of relationships, Rost avoids the trap of creating a mythical leader and simultaneously recognizes the criticality of relationships and persuasion. Leaders don’t preside over followers, they join in a relationship with them, where the followers are persuaded to participate for the betterment of their collective goal.

Persuasion is getting someone to do something that you want – or that your group collectively wants – without the use of force or threat. If you must threaten someone, then it’s coercion. However, the challenge is that coercion is not in the explicit threat, but it is also in the implicit threat. While no one might say that you must do this, or you’ll be fired, the implication is all too often well understood.

Persuasion makes people WANT to do something, and coercion makes it clear they MUST do something – or suffer the consequences. A person who is being coerced lives in fear, and fear isn’t good for creative tasks. (See Drive and Creative Confidence for more.)

Rost summarizes his perspective on leadership with four essential elements:

Effectively this describes the parties in the relationship, the structure, and the purpose. There are, however, some nuances.

There’s no need for a person to always remain the leader and others always the followers. Co-led and self-organizing groups are OK. In Rost’s view, both the follower and the leader are active participants in the relationship. If someone isn’t active, they’re neither leader nor follower.

The intent to create real change is difficult, because the scope and scale of the change is very different. Leaders and followers may seek to solve world hunger or merely satisfy their hunger for a while. They share purposes – view of the world in the future – rather than specific, tangible goals. They may not always agree on the exact path moving forward, but they agree on the destination they’re trying to reach.

Being a leader means expending energy in the development and maintenance of the leadership relationship. That energy necessarily must come from somewhere else. That “somewhere” is often personal, direct productivity. A leader sacrifices their individual output in the service of the greater good of maintaining the relationships.

Done correctly, the productivity of the followers drives the goals forward faster than would ever be possible by an individual contributor. A large or even moderate group of followers with a reasonable degree of alignment can be a powerful force.

Still, a leader must be able to accept the fact that they feel like they’re personally getting fewer things done – in service of the greater good.

Leadership as a Transformational Process

If leadership is different than management, then what makes it different? One consideration is that it’s transformational. What is happening is more than the direct results that are being achieved. Instead, the people in the relationship – both the leader and the follower – grow and become more than they were. Not only does leadership transform the objective reality through results, but, more importantly for the long term, the people involved transform.

In the context of Rost’s work – based from Burns work – is that the transformation moves the people to “higher levels of motivation and morality.” While this is interesting, I’m not sure that it quite captures transformational leadership. Motivation is a slippery topic, because it’s not single dimensional. It ebbs and flows, and it is very situationally-dependent. Whether we’re looking at our willpower to push through something (see Willpower) or hope that something will get better through our efforts (see The Psychology of Hope), motivation isn’t a fixed thing.

Morality is its own sticky mess. The Righteous Mind places morality on six foundations that have differing ratios – but not real levels. Moral Disengagement wanders through the ways that we lose our moral bearings without indicating ways that we transform into more moral creatures.

I tend to think of the transformation of leadership in terms of increasing our capacity. This carefully side-steps our direct results and acknowledges that someone who has been through transformational leadership has a greater ability to do things in the future.

What Others Are Saying

With all the discussion about the research Rost had done – and the research that the people he was quoting had done – I thought it would be interesting to review the leadership books that I’ve read and taken notes on to see what they had to say about leadership. Just as Rost found, I found that some of the books that I put into the leadership category didn’t define it – a fact that had escaped my notice while reading the book. However, I was able to pull quotes from my notes for several. There are listed below in alphabetical order by the primary (first) author’s last name:

What is – and What Can Be