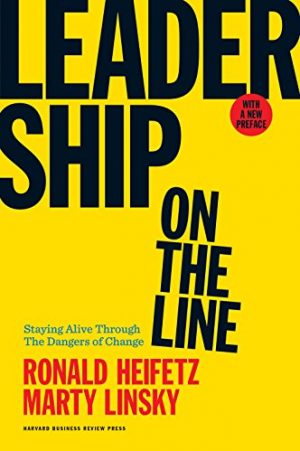 Never has the relationship between leadership and change been so laid bare as in Leadership on the Line: Staying Alive Through the Dangers of Change. It should not be surprising that leadership and change are so related. Leaders are the catalysts and instruments of change. They help organizations and individuals make different decisions and exercise different behaviors. They are, in some ways, the embodiment of the best parts of change.

Joseph Rost spent most of his book Leadership in the Twenty-First Century trying to come around to a conversation about what leadership is. In the end, I’m not entirely sure he nailed it – but neither has anyone else, so whatever you’ve got is, I suppose, good enough. Rost – like James MacGregor Burns – believes that we focus too much attention on the leader and not enough on the relationship between the leader and the team. (If you’d like more about Burns’ work, it was titled, simply, Leadership.)

It’s in the context of realizing that leadership is about how a person – the leader – manages their relationships with others and how that can generate amazing outcomes.

There’s definitely an awareness that leadership is a long-term game of developing people and accepting the criticisms that come your way when you’re willing and able to make some hard choices. Of course, effort must be consumed to keep from becoming the issue instead of just being the messenger of the issue. That being said, the essence of leadership is taking the hard-to-swallow pills and waiting to see how things are going to come out better.

The key to effective leadership is a long-term focus, but if you’re going to be around for the long term, you’ll have to expose people to a rate of change that they can absorb. Too fast, and the wheels come off the cart. Too slow, and the competitors in the market eat you for lunch.

Post-It notes are interesting things. If the adhesive is too weak, they fall of the page. If it’s too strong, they tear the page when removed. Post-It notes work because they’re in that narrow band that’s neither too weak nor too strong. That’s where you want your rate of change for the organization and for individuals. Not too fast and not too slow. This sounds relatively simple in theory; however, in practice, it’s very difficult to accomplish.

Every person and every part of the organization has their own measure of the ideal rate of change. Some people have a high degree of tolerance for change, so they can handle a higher rate of change. Others in the organization have a much lower tolerance and need a slower rate of change. This means trying to find a general pace that’s in the center between most individuals, finding ways to mitigate the degree of apparent change for the folks who have a low capacity for change while accelerating the degree of apparent change for those who have a much higher capacity.

Complicating this process is that different parts of the organization will experience different amounts of change at different times. The result is a constant struggle to stay on the ball to ensure a degree of change that’s working for most people in most departments.

Leadership on the Line calls this “controlling the heat.” It’s about pushing enough to keep people and parts of the organization from falling out of the change process and not pushing so hard that people exceed their capacity for change.

While Leadership on the Line doesn’t directly address the gap between actual change and the perception of change, the managing the heat metaphor certainly reflects this constant management of perceptions so that people perceive the change inside of their band of tolerance. There are several ways to manipulate this.

One way is to spread out the required behavioral changes over time. In the context of a single department, this may lengthen the time for the change, but depending on how things are sequenced inside of the overall change process, it may not impact timeline at all. By starting with the groups that have the most change and allowing them to process that change over a longer period of time, it’s possible to “turn down the heat.”

Another approach is to deploy a temporary compensating measure. Consider the idea of a need to do double entry during a transition for a short period of time. It’s possible to ask those responsible for data entry to enter into both the old system and the new one, or it’s possible to hire assistance to do the old work. (I’d encourage this rather than the added requirement of doing the new work.) Similarly, it’s possible to add help to take care of mundane tasks to create time and availability to do the double entry.

Obviously, care must be taken that the compensating measure doesn’t become a permanent crutch, but as a part of ensuring that the rate of change remains acceptable, it’s an important option.

Not to discount the importance of mass communication, stakeholder management, or any of the other things that one needs to understand in managing a successful change project, but above all, the connections that people make and maintain with one another are critical. Humans are wired for connection. In fact, in The Heart and Soul of Change, it’s asserted that the most powerful component of the therapy process is the alliance between the therapist and the patient – their connection.

We see this need for connection everywhere. Even baboons whose mother has a better social network have a higher survival rate. In the wild and in our domesticated societies, connections matter. (Even connections with dogs matter – see How Dogs Love Us.)

When someone – particularly when they’re in a close relationship with you – expresses their anger at you, it’s hard to stay detached and absorb it without becoming personally defensive. (See Conflict: Detachment not Disengagement for more on detachment and Dialogue for more on automatically being defensive.) However, as difficult as this may be, it’s a powerful way of building trust. By absorbing the attack without retaliating, you demonstrate that you’re safe both physically and psychologically. (See The Fearless Organization for more on psychological safety.) This isn’t the normal expectation for folks.

We expect that when we attack others, they’re likely to attack back. It’s human nature to defend yourself. However, when you find ways to not perceive anger as an attack, you show that it’s safe for others to share their feelings without retaliation.

Some of the changes that an organization undertakes are well known. Instead of doing X, you’ll do Y. These changes Heifetz and Linsky call “technical changes.” They’re straightforward, because the answers and outcomes are all known. The other kind of change – the kind of change that we face when dealing with complex organizations and individuals – are adaptive changes. These kinds of changes require adaptation and experimentation.

For adaptive changes, there’s no one known way to do it right or, in many cases, even a pattern for what “right” looks like. Instead, we must set out in a general direction and work our way through the challenges and opportunities to find an answer that works.

Adaptive changes are therefore more challenging and require more preparation and energy. They’re often worth the extra effort because of the transformational effects that can be realized when the changes are implemented.

Successful change is more evolutionary than revolutionary. In adaptive changes, we evolve to one change, then adapt and make another push forward. Often, there’s no one defining moment where we move from one space to another. Instead, there’s a gradual progression to more changed thinking and more of the newer, more desirable behaviors.

Leading in these environments, where change is continuous and evolutionary, requires a greater level of manager than was needed fifty years ago. It’s the state of constant change that puts Leadership on the Line.