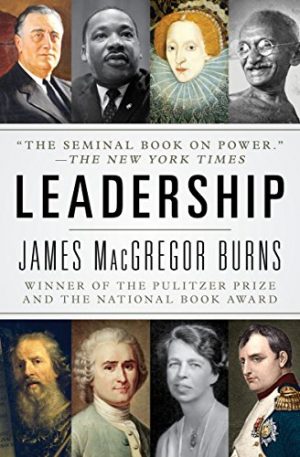 The title is simple. The book is long. However, Leadership is a comprehensive look at political leadership that James MacGregor Burns executes well. I’m not personally much of a fan of political books. However, as I read Leadership for the Twenty-First Century, it became clear that Rost derived a great deal of his thinking from Burns’ work, and thus it was important that I read it to understand more clearly Rost’s thinking.

In rapid succession, Burns explains that leadership is a special form of power, and power is a special form of relationship. Power is the ability to influence others. Burns explains that leadership is a non-coercive form of power. That is, there are no consequences for people to follow the leader. They desire to follow the leader, because they perceive it is in their best interests. Coercive leadership relies instead on the follower’s desire to avoid consequences.

For a long time, it was believed that rewards and punishments were processed as two different directions by the same part of our brains. However, the latest neurology indicates that happiness and pain aren’t processed the same way at all – and, as a result, rewards and punishments may not be processed the same way either. In 1985, Watson and Tellegen produced a model that maps emotions on a two-factor structure of affect. One definition of affect is “touch the feelings of (someone); move emotionally.” They separated the positive affect from the negative affect and created a diagram that showed the resulting emotions as various degrees of each. (See Emotion and Adaptation for more on the two separate systems that process positive and negative perspectives.)

Daniel Pink in Drive explains how subtle changes like time pressure dramatically change (reduce) performance on creative tasks. Burns seems to intuitively know that the results you get from a positive approach and the results you get through instilling fear might be radically different.

In generations past, things were harder – but also simpler. It was a simple matter of survival. You obeyed the leader, whether that was a lord or a monarch. The power of the leader was almost limitless. On a whim, they could exile you from the community, almost certainly dooming you to death. You accepted your place, as you toiled just to survive and for the survival of your family. Everyone worked because they needed to. The line between life and death was razor-thin and always too close for comfort. (See The Evolution of Leadership for more.)

Authority, then, was necessary to hold back the chaos and allow a single leader to direct the group. This was an organizing principle that allowed humans to work together and to slowly grab hold of control of the planet. Authority was power, and power could sustain the society. Everyone knew their place in the community, and little concern was given for upward mobility, as too much was focused on what it takes just to survive.

The complexity of our interactions has enhanced our expectations. Total authority like monarchs and lords isn’t possible any longer.

How people respond to rewards and punishments isn’t consistent. To some, pain is a nuisance; to others, it’s a critical issue to be addressed. Criticism bounces off some people like rain on a duck’s back, while for others it cuts deep into their core. Reactivity to coercion isn’t the same either.

In my career, I’ve been, at times, called difficult to manage. Looking back on this in the context of Burns’ work, it seems like I have a very low reactivity to coercion. I wasn’t afraid of losing my job, and, as a result, the coercive, veiled threats didn’t work on me. I do remember stunning a project manager by telling him I’d quit before doing what he asked – and I would have.

Coercive techniques lose their efficacy when people don’t react to them. Fewer people feel as if they’re at a precipice, therefore fewer people react in fear. The same factors that made me difficult to manage makes younger generations difficult to manage as well. They believe they can always return to their parents’ home, where previous generations may not have felt that way – at least not in such great numbers and with such surety.

Previous generations warned of the potentially dire consequences of quitting one job before having the next lined up, but, in some cases with younger adults, this seems about as normal as washing your bed sheets. That is not to say that they change jobs more frequently than we did – the data from the Bureau of Labor Statistics doesn’t bear that out. However, they feel much less fear about those changes.

The good news is that lower reactivity means that there’s a greater opportunity for healthy conflict.

The Role of Conflict

In our world, whether shaped by history or not, we generally perceive conflict to be bad. We think that nothing good can come from conflict. However, the truth is that most good things come from conflict. Conflict itself is neutral. How you respond to conflict makes all the difference.

The Christian Bible says that “iron sharpens iron,” revealing that we’ve known conflict and bumping into one another has the capacity to make us better. A more contemporary example might be the results that Pixar gets through conflict in their movie-making process, as Ed Catmull explains in Creativity, Inc.. Sometimes the sentiment of conflict is carried below the surface of our consciousness. We see examples of people who maintain inner conflict between their current capacity and their desire, resulting both in flow (see Flow, Finding Flow, and The Rise of Superman) and peak performance in a field (see Peak).

Despite conflict’s obscure value, there are times when conflict, disagreement, and dialogue aren’t called for. (For more on how to dialogue, see Dialogue.) Sometimes, leadership calls for decisiveness. The mark of a good leader is realizing when this is and isn’t necessary. Every move toward decisiveness necessarily cuts off others’ opinions. They’ll have to trust that this is the special case – not the norm – to continue to want to bring their whole selves to the organization.

There’s a delicate walk that good leaders take. On the one hand, they provide sometimes critical feedback that allows those they lead to grow. On the other, they build those they lead up in ways that allow them to have enough self-esteem and perceived self-efficacy that they can continue to function. Good leadership is mindful of the need for people to save face, no matter which culture they’re in. After all, The Ego and Its Defenses is clear that the ego is well-armed to protect itself should that become necessary. It’s up to the leader to not call the ego to arms.

When leaders can support the self-esteem of those they lead, they expose the capacity for them to hold others in high esteem and open the door to their learning.

Capacity to Learn and Be Taught

A long time ago as I was learning to lead, a brilliant leader and friend of mine explained that there are coachable – and non-coachable – behaviors. That is, sometimes, the things that get in folks’ way aren’t things that they are willing or able to confront yet, and, as a result, they aren’t open to coaching on that topic.

There’s a perennial debate about whether you should hire for experience or enthusiasm. Is it better to have the benefit of experience or the exuberance of youth? Should be you be focused on finding someone who has done it before or who is willing to run headlong into a problem and overcome it in a potentially new way? This focus hides the real question that’s burning inside the brains of hiring managers everywhere. Will this person be teachable – and teachable in ways that matter to our organization?

We want experience. It makes things quicker and easier. However, we don’t want bad experience, nor do we want to have to provide experience for someone who isn’t willing to learn. We see in the youthful enthusiasm a willingness to be taught, and sometimes that outweighs the hard-earned experience that the wiser members of the talent pool have.

Leaders need to find – and hire – the followers that can help to sustain them. Intellectual leaders are particularly in need of followers and patrons to keep them going.

Leadership isn’t often thought of as a state of internal conflict, but that can be the case for intellectual leaders who struggle between the pure approach and the practical one. They struggle with careful correction and encouragement. They walk the line between having the analytical data and the courage to proceed with their gut.

All this conflict takes a very large toll on the leader. They need followers who can help them sustain their resolve in the mission and the objectives to be met. They need patrons who are willing to support them while they’re working on the mission when it isn’t working yet. Without this company, we may find that the leaders fold under the weight of the task they’re undertaking and their own conflict.

Internal pressure in the leader isn’t the only pressure in society. Whether it’s oppression of women and their right to vote or oppressive organizations that are choked by the poor quality of their leadership, not everything is right in the world. We find that, wherever pressure can build, it will be relieved. The relief is sometimes accomplished in peaceful ways, which help the oppressed accomplish their goals of more equitable treatment. But, sometimes, that isn’t the case, and entire societies are rocked by the explosive force as the system is blown apart.

In the Egyptian revolution of 2011, citizens used Twitter to organize and began a revolution on January 25th that caused President Mubarak to resign. It was a part of the Arab Spring that occurred in late 2010 and into 2011. The series of protests had profound effects on the region, and they demonstrated that the velocity and ferocity of people united in their struggle could be amplified and accelerated easily through the use of social media in ways that are difficult if not impossible to prevent.

Political leaders in non-democratic states were caught off guard by the ability for the populace to organize and activate their power. Organizations everywhere realized that authoritative leadership isn’t working like it used to.

In the way that democratic leaders function, there’s an interesting question about who is really leading whom. As an elected representative, the politician is supposed to be working for the good of the constituents that elected them and the government at large. To fulfill this role, they must be constantly monitoring the needs of the people and then following the direction that they’re headed. This opens the problem of figuring out where the majority of the people are heading – and how to balance waiting for their clear direction and the expectation that you’re out in front leading them.

Burns also defines leadership as a special form of power and power as a relationship between people. Just like super-massive planets can tug on the stars they orbit and cause them to wobble, so, too, can followers shape the path of leaders.

The Need for Belonging

It’s lonely at the top. Pick up any leadership book, and you’re likely to find that quote or at least that sentiment somewhere in its pages. Humans – you and I – were designed for connection. Without that connection, we’ll find that we’re missing part of what it means to be human.

Leaders need other leaders who can support and build them up and followers who can strengthen their resolve. Without powerful followers, leaders eventually succumb to the pressures of the world and give up their quest.

If you’re looking for how to strengthen your leadership and find others to build you up, perhaps the first step is reading Leadership.