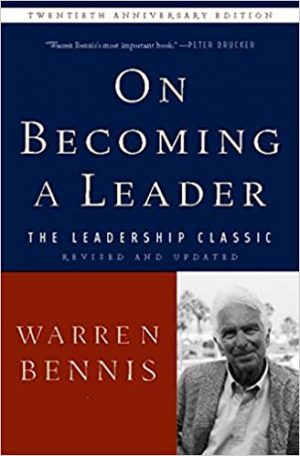 Sometimes my reading list has me walking down a long hall with statues lining each side. The statues are the great men and women who moved forward our understanding of ourselves, the way that we work, and the way that we lead. On Becoming a Leader is Warren Bennis’ capstone. Though he had an autobiography written after this work, this was the last book focused on the process of becoming a leader.

Many people who were the foundation of leadership have passed. Edward Deming may be remembered more for management than leadership but he was a leader in his own right. Chris Argyris brought us the idea of the ladder of inference (see Choice Theory for more). James MacGregor Burns shared his perspectives on political leadership through his book, Leadership. Robert Greenleaf led us to his perspectives on Servant Leadership. Jeff Barnes reminded us of Walt Disney’s leadership in The Wisdom of Walt. There are, of course, many others whose contributions have helped leadership move forward but who didn’t always focus on leadership.

Leadership isn’t something that you’re born with. It’s not like eye color or height. It’s something that everyone must work on to develop and cultivate. The way that leadership is cultivated is through the crucible of hard times. There’s no path to leadership that doesn’t run through a path of sorrow. There are plenty of books that are published each year that promise you’ll become a leader if you only follow their five-step plan or if you only envision it first.

Bennis’ wisdom says this isn’t true: there are no shortcuts, and those who say otherwise are like the fad diets that promise great results with no work. Certainly, there are accelerators that allow for leaders to be developed faster; otherwise what would be the point of leadership development? However, there is no path that will not require some work on the part of the future leader.

Leadership development is a long-term game. It requires extraordinary patience and diligence on the part of the organization to ensure that everyone is given the tools they need to maximize the value of all the difficult situations they must go through.

There’s been a shift happening in our society, which was captured in Range. The shift is from the deep-deep specialist to someone who can integrate across the boundaries of professions and who can adapt to the changes that our increasingly volatile, uncertain, complex, and ambiguous world requires. Bennis knew this, and that is why he explained it’s a leader’s adaptive capacity that makes them the most valuable.

Bennis makes the point that when you look at great leaders, you rarely find people who have had no struggles. Mostly when you find great leaders, you find that they had some sort of difficult phase or event in their life, and they found their way to the other side. What they developed during these struggles was the character that fuels their greatness. In Antifragile, Taleb explains how the right level of challenge or struggle at the right time can allow people to grow and become more, much like how you get stronger muscles by tearing them down just a bit through exercise.

Great leaders learn how to create this same kind of challenge for those they lead. They find ways to push them in ways that allows them to grow. The process is very long, but it pays great rewards.

In the Long Term

Short-term thinking is a “societal disease.” Those were the words that Bennis used to describe what has become the plague of our century. As a species, our ability to work together allowed us to conquer the planet. (See The Righteous Mind for more.) Our ability to support some people working on long-term endeavors has led us to the Moon – and to a gradual shift in the amount of effort required for our basic needs. Diffusion of Innovations recounts the improvement in farm productivity – and the drop in the number of farmers that were needed to support our food needs. We build roads and machines to make the work of people in the future easier. Well, at least we used to. It seems like today we’re more focused on the quarterly returns than the returns to humanity.

While there is a need for enough short-term focus to keep things going, too much focus on short-term needs leaves us with the same struggle year after year. When some effort can be invested in long-term needs, compounding kicks in, and we’re able to make our load lighter – and, ultimately, our overall lives easier.

If You Can Understand It, It’s Yours

“Nothing is truly yours until you understand it – not even yourself.” From the Socratic dialogues and the inscription of the oracle at Delphi, the instruction has been clear: know thyself. However, too many people aren’t in touch with who they are. We wander through life wondering what our purpose is. We aren’t sure what we believe in or what we stand for. We don’t understand why we get angry or sad. Instead, we bumble our way through the darkness of our thoughts and emotions hoping to find the door that leads to happiness. (See Stumbling on Happiness if you’re looking for more about how we look haphazardly for happiness.)

Perhaps one of the reasons why we don’t think in the long term is that life seems like a collection of random events over which we have no control or influence. In those situations, why would someone try to think of the long term? If we can’t learn enough about ourselves to predict our behaviors, then what good would it do?

Because leaders are so varied in their approaches and skills, it’s often hard to draw a dividing line between someone who is and someone who is not a leader. However, one key marker is the way they treat a mistake. Leaders accept – but don’t like – mistakes and work to prevent them or mitigate their impacts. Non-leaders see a mistake as a failure.

Some people have internalized the idea that you must be perfect. For some, that undoubtedly came from a performance-based love in their childhood. (See The Four Loves.) For others, the cause may not be so clear, but the results are the same. By expecting that everyone and everything must be perfect, the results must be disappointing. (See The Paradox of Choice for more.)

Louis Pasteur said that “chance favors the prepared.” More commonly, we say that luck favors the prepared. The truth is that luck is random, and it comes to everyone. Those who are prepared are more able to take advantage of the lucky break when it comes. Leaders are constantly preparing for the lucky break – while not expecting it or expecting that everything will be perfect.

At some level, the preparation that must be done is the constant balance between preparing for the future – paying attention to the long term – and tending to the moment, the everyday, and the present. Because luck is, by its nature, random, you’ll never know which investments you should be making as a leader. You only thing you know for sure is that you want to continue to make long-term investments in ways that prepare you for what will be your eventual turn at luck.

On Becoming a Leader reverberates through other works and provides a simple and straightforward context that we can use to develop our own method for becoming a leader.