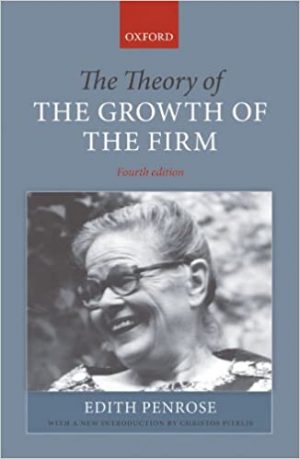 What makes some organizations grow and thrive and others wither and die? That’s just part of the question that Edith Penrose set out to answer in Theory of the Growth of the Firm. Her book was initially published in 1959 and was reprinted after her death. It’s a classic work about how firms grow, including the forces that lead to growth and those that inhibit it.

For some time, there’s been a debate in academic economist circles. It’s a debate that focuses on the balancing loops between the economies of scale and the diseconomies of scale. In other words, does an organization generate more value by being large or by being small? More importantly, is there an optimum size that organizations should grow to in order to capitalize on the greatest benefits with the least penalties?

Penrose surmises that there is no absolute best place to be in the size of a firm and, further, that the growth of the firm is primarily a factor of its size; therefore, larger organizations will grow by a larger absolute amount than will smaller organizations.

The Game of Monopoly

One of the benefits that can be claimed by all organizations, but particularly large organizations, is to build a relatively impregnable base. This base may formed by brand loyalty or by legal protection, such as those afforded by patents. These impregnable bases create a space that the organization can grow safely. As organizations grow larger, they begin to have the ability to take on monopolistic powers, which further increase their power in a market and as an organization.

It’s the monopolistic powers that have been deemed too powerful for the forces of the free market to contain, and that’s why we have antitrust legislation that is designed to prevent any organization from unduly prohibiting other organizations from entering a market. What’s particularly interesting about this – to me – is that activities that would be allowed when an organization isn’t large are legislated against in the case of large organizations.

As an example, Microsoft faced antitrust legislation centered around the inclusion of Internet Explorer in the operating system against rival web browsers. One of the interesting aspects of this case is that the competing companies weren’t charging for their browsers, either. In this case, the expanding internet browser market was perceived as too large and important for Microsoft to establish a new, impregnable base of installed browsers.

The Power of Knowledge

Fundamentally, the growth of the firm is related to the ability to spare resources for investments in new growth. When an organization is barely struggling to get by, it doesn’t have much in the way of resources to invest in future growth, thus there isn’t much future growth. However, if investments are made over a long period of time, these investments are cumulative – like compound interest – and can therefore be an engine to increase resources.

However, in some cases, organizations may find themselves in a situation where their material resources like plant capacities and capital on-hand may be sufficient, but there may not be the management knowledge and strength to take advantage of these resources. That’s why the development of knowledge is an accelerator for growth both because it often creates the opportunity for more efficient operations and because it takes advantage of unforeseen market opportunities that a less knowledgeable management team wouldn’t see.

The Value of Knowledge

The path that led me to Theory of the Growth of the Firm was through the knowledge management and a discussion where I was trying to find a general purpose formula for knowledge so that organizations could understand its importance, need for development, and need for retention. Patrick Lambe pointed me to Penrose’s work and the ultimate assessment that knowledge isn’t something that is easily quantifiable.

The Soviets discovered that centralized control that planned everything didn’t work. Penrose reached the same conclusion and suggested that larger organizations no longer functioned with centralized control but instead served coordinating and tone-setting functions. That organizations eventually reached a size where the central part of the organization didn’t substantially differ from that of a holding company.

As a result, organizations must progressively give more autonomy to different business units or operations as the organizations themselves get larger, or they will unnecessarily constrain management development and therefore choke off growth opportunities.

In the Checklist Manifesto, Atul Gawande shares the value of specialists for some kinds of surgeries. He explains that skill level increases with the practice of a specific type of surgery. This is consistent with Anders Ericsson and Robert Pool’s work in Peak. If you’re going to get very good, it’s going to take purposeful practice.

All is not lost for those who don’t have the size to support specialization. As David Epstein explains in Range, having a variety of skills makes people more able to adapt – something that’s important in today’s volatile, uncertain, complex, and ambiguous world. Reengineering the Corporation even argues that the specialization that was driven by the Industrial Revolution was over-specialization, and much of the work to gain efficiencies in an organization are accomplished by making tasks require less specialization.

The Role of Technology

Kodak is a pale reflection of what it once was having emerged through bankruptcy court. The organization was hurt by the declining sale of film and related developing chemicals as the digital photograph boon happened. The irony of this is that Kodak was the originator of digital photography.

From a consumer point of view, digital photography allowed for instant feedback and therefore better pictures. As the technology matured, it became as good as or better than traditional film-based approaches, and as a result, the industry of making and developing film evaporated. Of course, competition from Fuji did hasten the demise, but fundamentally, the technology available shifted. As it did, organizations that were able to take advantage of it thrived where those that didn’t barely survived.

Does It Apply Today?

Penrose lays out persuasive arguments in many ways. The logic seems flawless – at least until the last decade or two. The large investments that large organizations can make seem to convey greater advantage than the small consumer could potentially hope to accomplish – even with better management.

However, I’m beginning to question whether all the economic theories and perspectives still hold true today. Consider that we’ve now got 3D printers that can print many parts – even medical assistive devices – without the need for inventory or a big production plant. Now anyone with an idea can be an author through a free blog – or even become a book author for less than $100. (See Self-Publishing with Lulu.com for more.)

The move to cloud-based software offerings and cloud infrastructure removes the capital requirements for buying software or hardware. Instead of having to build servers and deploy software, you simply need to agree to a recurring charge.

Certainly, there are efficiencies to doing larger production, but the ability to make low-risk test runs and try things before making serious investments has lowered the bar of competition against large organizations. As a result, I wonder if the diseconomies of scale – if only in their lack of agility – may be sufficient to turn the tide towards smaller organizations.

The data seems, at least on the surface, to support this. The US Bureau of Labor Statistics indicates that the percentage of employment by small firms is increasing. This was predicted by Richard Florida in The Rise of the Creative Class. The creative class tends to like to work for themselves. (See Drive and Why We Do What We Do for more on the importance of autonomy.)

So, the short version is, I don’t know. The factors that Penrose explains are still in effect today. The question is whether the reduction in market friction for small size batches isn’t the same kind of transformation that we saw as the mini-mill steel production plants that drove the huge foundries out of business. As with most things, the answer is probably it depends.

Consumerism – The Treadmill of New

We’ve become enamored with the treadmill of new. We’ve got to have the latest car, the latest phone, and the latest everything else. The Hidden Persuaders by Vance Packard explains how marketers drove us to desiring the latest and greatest even when what we had was objectively good enough. Not only did we have to “keep up with the Jones” – we deserved better. The manipulation of our emotion overwhelmed our rational senses, as we would upgrade our cars and our electronics at a startling pace. (See The Happiness Hypothesis and Thinking, Fast and Slow for more about the powerful influence emotions have on us.)

So, maybe instead of picking up the latest trend in business books, it makes sense to look at a classic – Theory of the Growth of the Firm – for a better understanding.