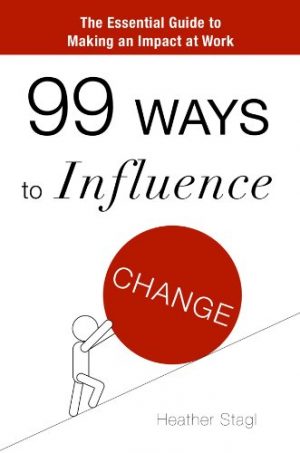 Many people that write about change write as if you’ve already got the support of executive leadership and that it’s just a matter of learning how to execute. It’s as if the whole buy-in problem has been solved already. Heather Stagl doesn’t write from that perspective. She writes from the perspective of the change agent who is stuck in the middle. They’re in a situation that they know should or needs to change, but they’re responsible for building support for the idea. That’s what 99 Ways to Influence Change is. It’s a handbook for those stuck in the middle of change for how to be more effective when they’re trying to get change done.

Rather than list the 99 ways of influencing change that Stagl presents in the book, I’ll point you to a one-page summary she has on her website. It provides the outline for the ideas that are presented in the book, which she shares came from some of the other books that I’ve already read and reviewed, including Leading Change, Nudge, Predictably Irrational, Switch, Influencer, and Influence.

The list is a good short summary of many key points and makes a great “one-a-day” sort of motivational book for trying to drive your change project forward. I’ve picked a few points from her list that I’d like to amplify.

One of the hardest things to do as a leader (and a parent) sometimes is to model the behavior you want to see in others. If you want to encourage emotional intelligence in others, you must display it yourself. Stagl explains that you show folks the “right way,” or the way you want to see them do the behavior, which demonstrates commitment and encourages others to conform to the behavior. She was implying but not directly referring to Solomon Asch’s work on compliance, which was followed up by Stanley Milgram. (See Unthink for more on Asch and Mistakes Were Made (But Not by Me) for more on Milgram.)

In Stagl’s view, the position of change agent should be temporary. Folks who are champions, agents, and friends of change should rotate periodically, so they don’t get burned out – and so the organization doesn’t start to reject them like a virus. Being a change agent is hard work, and you don’t want folks to have to take on the role forever. (If you’re feeling like you’re becoming burned out, you’ll find resources at Extinguish Burnout to help.)

Some of the suggestions that Stagl shares come with warnings and caveats. Imploring folks to compete is one of those suggestions that receives a warning. I firmly believe that some folks are wired to compete, and they want that sense of competition in many aspects of their lives. I also believe that this is generally unhealthy when focused internally in an organization. Richard Hackman in Collaborative Intelligence explains how the forces of competition inside a group are disruptive to the success of the group. As a result, I believe that competition should be reserved for outside the organization and collaboration used exclusively inside the organization.

I recognize that this may be an unpopular view, with some indicating that salespeople and others who are prone to competitive personalities may need this to be motivated. Here, I point them to Edward Deci’s work in Why We Do What We Do and how fragile intrinsic motivation is in the face of external motivators – like competition.

It’s framed in the context of transparency in an item titled trust. It’s about how to improve the trust, because trust is a universal lubricant that makes things easier and better. (See Trust=>Vulnerability=>Intimacy, Revisited for more of my thoughts on this.) It’s important to realize that trust is sometimes – but not always – transparency. The more that you’re able to help everyone feel like you’re trustworthy in your actions, your capabilities, and your communication, the less friction you’ll see in your project.

Yogi Berra is said to have said, “You can learn a lot by listening.” The truth is that, though we all believe we’re good at communicating, we’re not all that good. (See Mindreading as a primer.) While our ability to understand what is going on inside others’ minds may have separated us from other animals, it’s not foolproof. (See The Righteous Mind for more.) The truth is that listening is about sense-making. This could be The Ethnographic Interview to try to understand another culture or Motivational Interviewing to try to deeply understand an addict’s point of view before gently moving them towards healthier behaviors.

The title inspired me to wonder, “What would I add as the 100th way to influence change?” Certainly, there are other ideas and research-based perspectives for moving change forward, but I think the simplest answer might be to read 99 Ways to Influence Change.