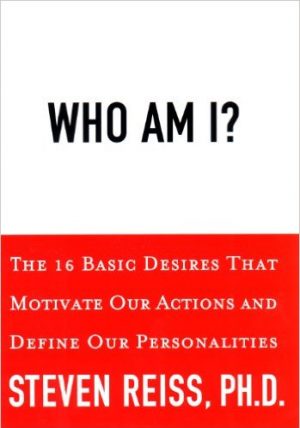 After trying to figure out the meaning of life, trying to figure out who you are has to the biggest question of life. Over the years, countless folks have tried to simplify the complexity of people, their motivations, desires, and their expected behavior into a set of simplifications that would allow people to be classified. Some of them with more success than others.

They’re looking for the displacement (Archimedes’) method for measuring an irregular solid – something that makes sense, is relatively easy to do and has good results. Whether you’re fond of the Myers-Briggs Type Indicator (MBTI), Disc profiles, the Enneagram, or something else, many people have tried to figure out how to classify people so that they can better understand themselves and others. In Who Am I?: The 16 Basic Desires that Motivate Our Actions and Define Our Personalities Steven Reiss shares his research into the sixteen desires that he believes motivate our lives. They are (in Reiss’ words):

Reiss is careful to point out that this is the refined list of the most important characteristics to influence behavior and that some desires – like the desire for shelter may be important to biology but not psychology.

The idea is that people are motivated to behave in ways consistent with their desire for these 16 areas of their life. That doesn’t necessarily mean that someone who is a high-status person will always seek status rather it means that someone who is a high status person will seek status to reach their perceived normal level. If they get too much status they’ll find a way to lower themselves. It’s all about a natural desire for where you are at – a sort of normal set point, not some absolute desire. This is consistent with the way I view the Myers-Briggs Type Indicator (MBTI) as well.

From my point of view we have a natural place where we exist on any scale – whether it’s Dr. Reiss’ scale of honor or whether it’s the intuiting-sensing scale of the MBTI. From that natural set-point we have a set of adaptation skills. That is a range in which we’re comfortable operating. If we’re a highly internal person (MBTI type I) then we might be OK in gatherings of 20 people or less. Or perhaps we’re OK in groups up to 100. However, when we’re at Disney World waiting for Space Mountain we might find ourselves overwhelmed. Mostly changing our core motivations isn’t something that is generally believed is possible – at least it’s not easy. However, creating a range of where we’re comfortable operating is something that we can do.

For instance, it’s possible to condition ourselves in areas just outside our comfort zone to expand it slightly. Like sitting in the middle of a busy mall for 10 minutes before heading home. This conditioning may not change our core desire for tranquility (Reiss) but it will, over time, change our ability to accept a different level of tranquility than we would prefer.

Just as we can change our comfort zone for a particular motivation we can also have others influence our behavior through social conditioning (upbringing, culture, etc). For instance, consider a person with a high romance component who is taught that sex before marriage is bad. In this case, the person may not do behaviors that bare out their natural desires, but they still may have them. It’s worth mentioning here that Kurt Lewin said that behavior is a function of both person and environment. That is just because someone is naturally inclined one way doesn’t mean you can’t create an environment that will discourage that natural behavior.

Aristotle divided human motives into means and ends. Ends are the things that you want intrinsically. Means are what you want in order to get to the ends. For most folks (except perhaps those who are high saving) money isn’t really the goal. Money is just a means to whatever ends they want whether that’s a better car, a vacation home, or something else. They say that most marriages end over fights about money – however, I’d put forward the idea that marriages end because of a difference of ideals and it just happens that money is the means to most of those ideal ends. Separating the means and the ends is useful because it changes the reasoning for behavior. Someone who likes physical activity may exercise because they enjoy it – thus it’s an end. However, someone who is high on romance may do exercise in order to reach their ideal form of beauty – thus exercise is a means.

It’s been said that our addictions are the result of our natural desires gone awry. They may have gone awry because of a bad set of situations that have “taught” us the wrong answer – like an elephant that won’t escape when tied with a rather flimsy rope. The elephant has a specific kind of learned – or in this case conditioned – helplessness around pulling loose his leg. An addiction is a habit that has such control over us that we quite literally feel powerless to stop.

It’s our strong desires that drive our addictions. Our natural desires are under-met and therefore we create solutions which eventually ensnare us in a hopeless attempt to figure out how to get our needs met – generally with an unfulfilling approach.

The Meaning of Life

Reiss toys with the idea of the meaning of life through referring to the works of a former concentration camp prisoner, Viktor Frankl. Frankl observed that the survivors of the camp were those that found a way to divine meaning from their lives. It didn’t matter who was strong or weak – it was most important that the person be able to find meaning in their life. This is consistent with The Time Paradox, The Happiness Hypothesis, and Stumbling on Happiness. People who had the ability to stop chasing the everyday addition to distraction and were able to find meaning in their lives are – overall – happier than their peers.

I have a high need to be understood. I’ve spent a ton of time learning how to communicate more effectively, considering different learning strategies, better learning how to predict what others are thinking, and so I was encouraged by a rather short section in the book on understanding – and how there are two different drivers for a lack of understanding:

Perhaps equally intriguing was the ideas that there are two factors that make understanding more difficult:

The Psychology of Dependence and Religion

It used to be believed that dependence was a sign of a weak will and by extension the idea that people are dependent on God (or religion) were somehow psychologically weaker or less advanced than those without a belief in God. Certainly there’s a pattern, which Stephen Covey describes in his book The Seven Habits of Highly Effective People. However, the point of interdependence – which Covey recommends – is a selected dependence on others. It’s an intelligence and awareness about the dependence.

Dr. Reiss states that there’s no statistical difference in the psychological health between those who have religious beliefs – and those who do not. On the other hand, churches and synagogues in the United States provide more than twice the philanthropy of social causes.

So the book included a quick and simple approximation of the assessment test which I codified into an Excel Spreadsheet which you can find here. If you’re interested in finding out more about who you are, I highly recommend Who Am I?