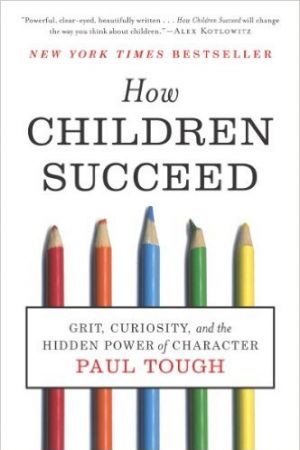 What makes a child successful in life? In my review of Emotional Intelligence I mentioned that tests of emotional intelligence were generally more indicative of long term success than measures of intelligence. However, emotional intelligence – as it was defined in the other book, isn’t all there is to the puzzle. Paul Tough tackles the challenge of the other indicators in his book How Children Succeed. One interesting bit is that Paul is a journalist. That is, his experience is on reporting on other people’s discoveries. That’s both good and bad.

The good is that he’s able to see things objectively. He’s able to draw on multiple sources and correlate differing but related points of view into a single path. The bad is that there’s not the same depth or passion that you’ll find in a book written by a practitioner. That’s not to say that How Children Succeed isn’t well researched. It is. That’s not to say that it’s not well written, because it is. What is does say is that if you’re looking for the richness you would expect to find from someone that has spent their entire life struggling with the question – you’ll need to look elsewhere.

One measure of how well a child will succeed is to measure the number of Adverse Childhood Experiences (ACE). That’s really all of the major life stressors that they experience as a child. Major life stressors are things like deaths in the family, moves, divorces, etc., the things that trigger stress in a child’s life. It seems that the problem with these experiences is that they may accidentally cause the stress response – the Hypothalamic-pituitary-adrenal (HPA) axis – to get stuck in the on position. The HPA axis refers to the interplay of hormones in the endocrine system that are characteristic of stress.

With the HPA axis stuck on, children are basically trapped in fear mode all the time. Fear, as we learned in Drive, prevents people from being creative or taking risks – risks that are essential to growth. So the higher the ACE score, the greater is the likelihood that a child will grow up with developmental problems. Effectively, a child’s executive function is compromised. That means that they won’t be as able to regulate their emotions or to delay gratification, and will have sub-normal ability to use working memory. Working memory is the space that you use to work with information. Consider for instance, how many numbers you can remember. It turns out that most adults can hold about seven digits of a number in their head at a time (unless we chunk the data as we learned in Information Architecture – Blueprints for the web). The seven digits that we can hold in our head is working memory. With extended periods of HPA axis activation, this working memory is restricted.

Beyond the developmental problems, the HPA axis wasn’t designed to be left on – or even to be hyposensitized. The human biology evolved the HPA axis to allow for short-term focus. It was never designed to be left on for extended periods of time. It evolved when there were periods where we were in eminent danger from a predator. If we didn’t run right away we’d become lunch for a hungry lion. However, the threats we face today rarely have to deal with life and death situations really. Most of the time, our brains make the situation feel life-and-death, which triggers the HPA axis, although in reality, few of us often fear for our lives.

As a point of fact, humans are the only known animal which can trigger their stress response in a way that’s not precisely coupled with the events in the outside world. We can “stress ourselves out.” In ways that no animal in the rest of the animal kingdom can, we are able to motivate and drive ourselves. This is good when we’re delaying gratification and working on future events, but it’s bad when we forget that stress is designed to be a short term thing.

Ultimately, since you can’t always control the number of ACE events which can trigger a bad stress response, what can you do to make things better? It turns out there’s something you can learn from a rat.

You No Good, Dirty Rat

ACE events may negatively impact a person’s potential for lifelong happiness and success, however, there’s a curious activity in mother rats that seems to counteract the negative effects of stress in rats. The curious activity was special attention that the mother rats showed in caring for their young – specifically licking and grooming. Mother rats could nurture better rats – better at socialization, curiosity, and maze navigation. (Maze navigation is apparently a useful skill for lab rats.) It was discovered, through the magic of gene sequencing, that the high levels of caring (bonding) switched on a part of DNA that allows the hippocampus to process stress hormones better.

Licking a child will pretty much universally get you a “yuck” from the child and any other person in the area. Of course, it’s not really the licking that was causing the better response. It was caring. It just happens that rats show caring through licking and grooming. Parents can help their children better cope, and possibly counteract the long term effect of stress by connecting with them.

Safe to Be Vulnerable

As I mentioned in my review of Emotional Intelligence, one of the great paradoxes of life is that to be vulnerable you have to feel safe. Until you feel safe you won’t be vulnerable. Parents who make their children feel safer create a foundation from which their children can leap. That means that the more you bond with, connect with, and care for your child the more they will be able to, and interested in, exploring. So, socioeconomic factors may lead to levels of success and happiness – but that success and happiness are not solely related to the family’s income. They are really related to how safe a child feels. How many, or few, ACEs they have – but more important than that how they’re nurtured. Nurturing a child can be a challenging task even for a healthy adult.

Nurturing children when your own internal state is locked into a fear mode is an almost impossible task. If you were parented with bad habits it’s hard to break those patterns and provide a secure base for your children. It’s hard for you to portray safety when you internally don’t feel safe because your own HPA axis is locked in the on position.

Creating a place of safety isn’t the only challenge. There’s also setting up an attitude of persistence that needs to be considered as well.

When you subtitle a book with a word like grit, there’s got to be something that backs it up. Grit, as defined by Angela Duckworth, is “self-discipline wedded to a dedicated pursuit of a goal.” Emotional Intelligence called this persistence. So what makes grit so important? Well, it keeps children in the game long enough to become good at it. Having read Outliers, I have no doubt that there are times in every great person’s life where they felt like they weren’t going to make it. Where they felt like they were stuck in relative obscurity but they were doing what they loved so they kept learning and trying to get better. That’s a dedication to a purpose that Paul Tough might define as grit.

Many folks will equate grit with gritty. However, I do not. I think about how grit is used to polish mirrors. Grit in successive levels of fineness can put a mirror-finish on a surface. I vividly remember using sandpaper with progressively finer grit to polish axels on my son’s Cub Scout pinewood derby racers. We would do all sorts of things to the axels to reduce the friction. Grit can be used to make something “better” than when it started. That’s what I believe grit does for children (and adults.)

Plato indicated that the desire for truth (curiosity) is one of the greatest motivators in life. This is certainly true for Plato, but not for everyone. In Who Am I? we learned that curiosity is one of the sixteen key desires. In How Children Succeed Tough speaks only briefly about the value of curiosity. However, the point is made that curious students are better students. Curiosity is the fuel that grit consumes to reach a goal. It is the spark that gets things started.

What Kind of Character

Character is a difficult thing to define. Unfortunately, Tough doesn’t really do much to illuminate this topic. There are scattered references to different bits of self-control and self-management, both of which are covered in more detail in Emotional Intelligence. There are references to virtues – but I found the discussion in Heroic Leadership of much more practical value about instilling virtues. So in this way, I’d say How Children Succeed probably doesn’t meet its subtitle, however, it’s still a good read and gave me plenty to think about.